Melbourne 2008: Life in a destruction zone

Word is that Melbourne is getting its 1 million more ten years early and that the Vic Government is in a panic because it has no idea how many permanent new guests have taken up its foolhardy invitations to come and stay. Who the hell is responsible?

Melbourne 2008: Living in a destruction zone

Once Melbourne number plates bore the motto, "The Garden State."
Then we got Kennett's formula, "Victoria on the Move." It sounded like some kind of unnecessary laxative, prescribed by a mad surgeon. Kennett tried to beat population up and, unfortunately for us, stopped the Victorian diaspora to Queensland. I guess he prepared the way for what Bracks did to Melbourne. Him and the editors and senior writers of the Fairfax and Murdoch press, who nagged shamelessly for population growth.

Since the Bracks Population Summit (2002) the Victorian government have ranted continuously and illogically about how we 'have' to have 1 million more Victorians. For local councils, population Projections exist in two forms:

Council data only go to 2011
ABS "Victoria in the Future" (VIF) series go to 2031.
But ...
The ABS has just discontinued VIF figures in circumstances which could mean that Victoria's actual growth has overshot both target and projections and has shot into the stratosphere. The word is that we are getting our 1 million more ten years early and that the Victorian government is in a panic because it has no idea how many permanent new guests have taken up its foolhardy invitations to come and live here.

This is almost certainly the reason for the hasty attempts to introduce draconian new "no-go", "slow-go" and "go-go" residential areas (now described as "areas of 'limited change', 'incremental change' and 'substantial change'.

“What I tell you three times is true.”
(Lewis Carrol, The Hunting of the Snark)

The Federal and State governments and the news-media repeat this all the time, despite much contrary evidence, and most people believe it because they have no other source of information.

On the one hand the State Government actively seeks to attract more and more immigrants to Melbourne.

On the other, it pretends that population growth is some irresistible force over which it has no control and for which we must all make way no matter what the demands. 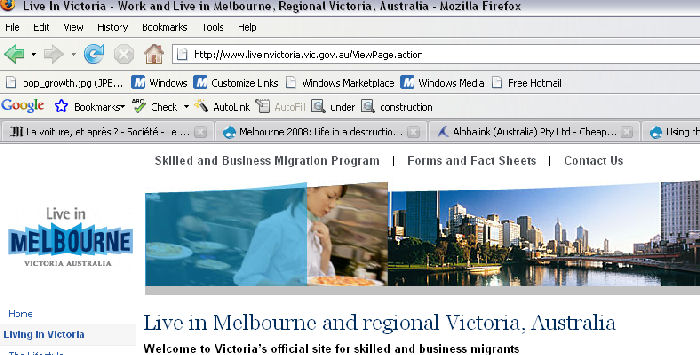 and there is a special page to assist private immigration agents.

Yes, your government is really working overtime to overpopulate this country.

Asking the public to accept massive intensification of infrastructure, huge cost increases, and loss of rights and space, and nature, on the grounds of a responsibility to reduce greenhouse emissions whilst bearing government imposed, unnecessary population growth is an Alice in Wonderland task. 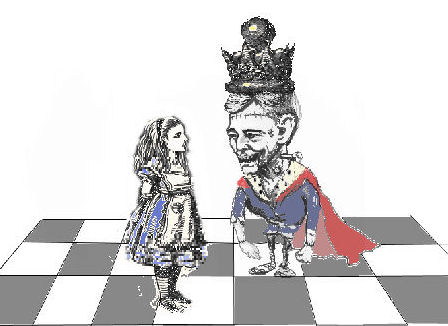 Alice laughed: "There's no use trying," she said; "one can't believe impossible things."
"I daresay you haven't had much practice," said the Queen. "When I was younger, I always did it for half an hour a day. Why, sometimes I've believed as many as six impossible things before breakfast." (Alice in Wonderland.)

But the Government is asking of the public to believe impossible things through the Melbourne 2030 program. Even the so-called independent auditors of Melbourne 2030 keep up the ridiculous charade:

Whilst recognising that almost everyone except developers hates Melbourne 2030, the ‘auditors’ of it write in their ‘independent report’:

“At the same time, local communities must be prepared to take a broad metropolitan view that recognises the necessity of urban consolidation,” they write, giving the reason as:

“(…)the urgent housing need resulting from unprecedented population increase and the need to reduce travel and greenhouse emissions to meet our responsibilities towards climate change.”

But even the Auditing Committee shows some unease, although not enough to save Melbourne or to question all the growth. They wrote:

“We would caution strongly, however, that the implementation of the five point action plan will not ease community tension unless local communities play a significant role in the application of new zones.”

Is conning the public going to make up for oil depletion and water scarcity?

• Growing the population and expanding infrastructure will increase the number of car trips and the distance travelled.
• Modern high-rises are power-hungry.
• Building upwards increases the electrical power requirements for air conditioning, heating, drying clothing, moving things and people up and down in lifts and pumping water upwards.
• It is harder to cool and heat high-rises and it is harder to cool large, dense cities.
• Reducing vegetation reduces rainfall and cooling.
• Reducing access to land deprives people of access to vital resources when governments fail (as they invariably do.)
• Our Victorian government has already failed us by overshooting our water supply. It has attempted to supplement that supply by costly, power-hungry technologies, notably desalination. It has undertaken in ignorance an impossible promise to deliver these with alternative technologies.

We are running out of water, fuel, and affordable food; native flora and fauna are threatened, and democracy has been sacrificed to growth.

Driving these problems is Melbourne 2030 in its role as a vehicle for imposing massive population growth.

But what is driving Melbourne 2030?

Population growth via immigration is not, as we are led to believe, a kind response to the starving millions of the world.

And it is not to create a better world for the rest of us.

• Apart from a small number of refugees, the immigration program is actually all profit-driven by big business in Australia. The profit goes to a corporate and investor caste well out of the reach of the middle and the working classes.

• The number one profiteers in population growth in Australia are international property developers, which include Finance, construction, real-estate, engineering.

…was largely auspiced by Property Developers, in APop (The Australian Population Institute) and mortgage financiers. As well as Australia’s mainstream Press – Fairfax and Murdoch - which own www.realestate.com and www.domain.com.au, Mr Richard Pratt and Mr Steve Vizard, both involved in criminal activities for financial gain, were very prominent in this event.

Perhaps the two biggest peak bodies currently coordinating government lobbying on population growth to advantage the industries they represent are:
• The Property Council of Australia
• The Australian Academy of Technology and Engineering Sciences (working with the Scanlon Foundation and the Australian Multicultural Foundation.

Here are the main aims of the Property Council of Australia, from their own document, "Powerhouse 2010 Update" downloadable as a powerpoint file here 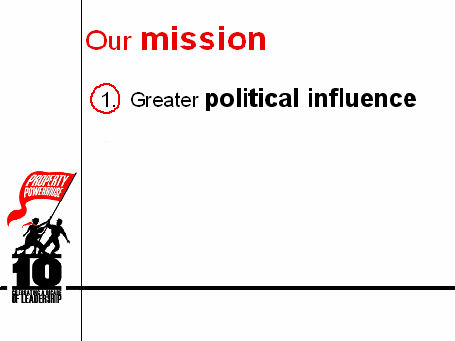 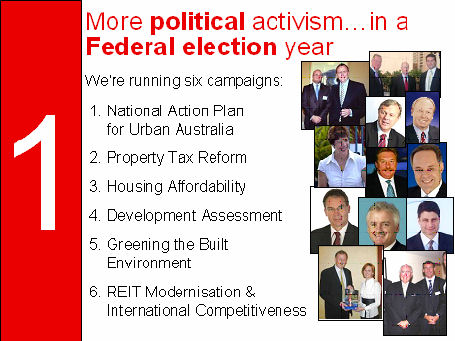 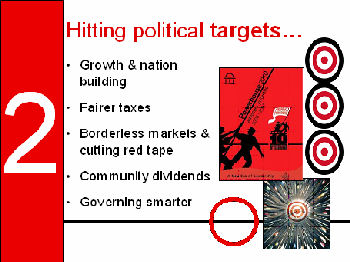 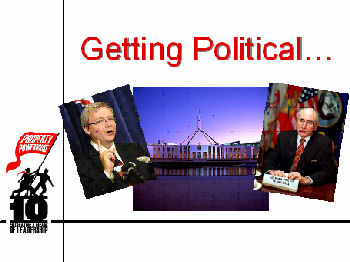 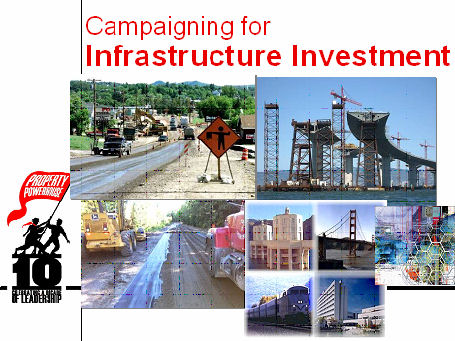 Don't you love it! Melbourne - and the rest of Australia - under permanent construction.
Ah, the excitement of choking traffic in the mornings; the challenge of breathing in that dust.
The joy of watching your favourite piece of nature paved over.
The engagement of foregoing sleep to write useless submissions to your local member and state government. 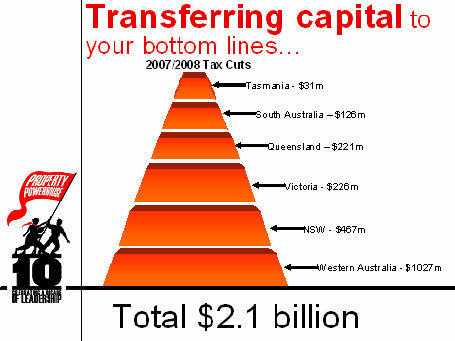 Gee, our taxes at work! 33% of my wages. And then, on top of that, there are those rising council rates, that burgeoning homelessness, those skyrocketing rents, those outrageous property prices, that choking traffic... 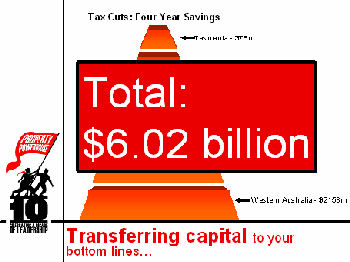 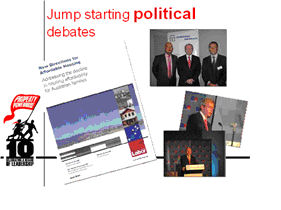 And, here is their latest 'branch' member - the Victorian Government. 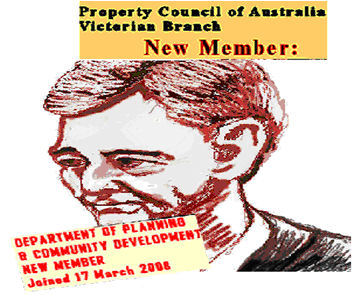 The Problem: Organising against population growth, dispossession and life-threatening hardship as oil and water deplete.

The mainstream media and government are corporatised and represent the interests of the corporate world. We cannot rely on them for information, guidance or to organise. We need to communicate outside of them: Internet, word of mouth, books, films, meetings and markets.

Organising requires comunication between neighbours and kin and power at a local level.

Default human social structure is along kinship lines of family and clan.

• Local Communities with a history together and especially with intact or strong kinship structures have the best chance of organising to survive well.

• Current land-use planning and population programs structurally split- up communities and prevent them from organising.

We need to challenge local laws that stop us having livestock and water for growing food.

• We need to re-design our communities so that we can grow food and keep domestic animals.

• It is vital to get back and conserve full use of suburban land and water. So look out for ways to do this.

The government is public-private corporatising rural land and giving more and cheaper water to their agribusiness program. Agribusiness does not care about you and me; agribusiness quotidienly watches people starve. That is why we have to fight government attempts to retain our water for other uses. We need it.

Laws should be primarily for benefit of local communities, then integrated into region and continent

Basically this means that our inheritance system and land-use allocation and planning system need reform towards:

• prohibition against disinheritance of children (legitmate or illegitimate), and

• leasing to substitute for land-sales

• Land with water and a stable population and society are what counts.
• Land speculation is a mug’s and a con-man’s game.
• High profits in any field are not sustainable in the long term.
• No society that encourages one class to profit at the expense of all the other citizens is sustainable.