The koala was rescued by Nigel Williamson of Nigels Animal Rescue. Barrie Tapp, the senior investigator for Animal Cruelty Hotline (sponsored by Animal Liberation NSW - free call 1800751770) was called in to investigate the trap issue. Jenny Bryant, of Koala Rescue, Tyabb, was also involved at the scene of the rescue and took the Koala to her rescue centre.

Sadly, despite Jenny's excellent care, the koala, which had had the trap hanging from its paw for days, died. 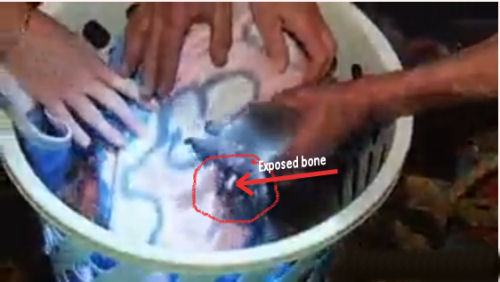 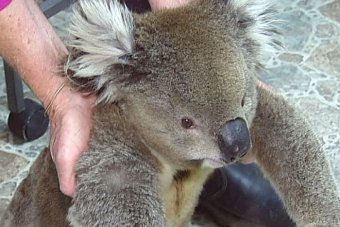 These traps are awful things and koalas these days, due to the removal of trees everywhere for human population growth, have to get down on the ground to go from tree to tree. They are slow on the ground and very vulnerable. They get stomped on by cows, attacked by dogs, and sometimes walk onto traps.

Victoria is not doing well in protecting wildlife or its habitat or our environment. Our wildlife carers work for no money and their services are hugely overstretched. Often, even when they successfully rehabilitate an animal, there is nowhere to release it because the native fauna habitat has been built over.

Getting help can be difficult

In this case, a complainant first called RSPCA and was told to call VicWildlife. He reported that, unfortunately, after calling three times, with no response, he called the local fire brigade, which in turn contacted Nigel.

Animal cruelty hotline is a free service to the community and you can remain anonymous if you so wish to report a complaint regarding animal abuse/cruelty. Animal cruelty hotline is not in any opposition to any other animal welfare organisation but is an alternative with trained investigators. Barrie Tapp an ex RSPCA Senior inspector for some two decades heads the Vic division and works closely with RSPCA Vic/ Vicpol/ and DEPI.

In an article with the grossly misleading title of "Kangaroo nearly kills child in Qld," 10:53am October 27, 2013, 9 MSN reported an accident where a car rammed into a kangaroo as, "A five-year-old child is clinging to life after a kangaroo smashed through a car windscreen west of Brisbane. Police say the roo and the car collided on the Warrego Highway at Kingsthorpe on the Darling Downs about 3am (AEST). The five-year-old was rushed to Toowoomba Base Hospital with life-threatening injuries. Another child and two adults in the car were taken to hospital with minor injuries." http://news.ninemsn.com.au/national/2013/10/27/10/56/kangaroo-nearly-kills-child-in-qld Reported 12:49 PM by ninemsn news. Kangaroo smashed through a windscreen? The car was "smashing" not the kangaroo! The mainstream media always vilify the animals, rather than human-caused car crashes. Then, the "kangaroo nearly kills the child", lifting their status to almost child "murderers." And, quickly, people start to think it is okay to get rid of them, rather than to drive carefully within their habitat. State roadbuilding authorities resist building wildlife bridges and tunnels in Australia, making this country one of the worst for wildlife fatalities. If the driver wasn't going too fast, perhaps the driver should sue the road authority for failure to allow for passage of kangaroos in the area. The extent of callousness in this report is breathtaking, and contributes to the extremely low standard of the report, which tells people nothing useful, but creates a destructive fiction. How can Australians publish something like this?

How about you do a story that no media wants to do, and instead of using sensational headlines to vilify Australian native wildlife whenever there's a collision from speeding vehicles, you take a good look at the drivers. As Australians we should all be aware of the risks of driving on highways after dark, and drive accordingly. Yet time after time the papers blame our wildlife and often call for yet another useless 'cull'. Culls don't work; they don't stop speeding vehicles from colliding with animals. It's very sad that this time a child was seriously hurt but the kangaroo did not take a dive into the windscreen. I'm sure he or she wanted to live too, and also had a family of his own. The media should start to change tactics; find out and alert the public the exact speed the driver was doing at the time, whether he was driving responsibly with his children in the car at 3.00am, was he distracted in some way, and what his blood alcohol level was when police arrived? We need to get the message through about driving more carefully if we have to drive on country roads after dark. There are devices we can discreetly attach to our vehicles that make a sound to alert animals up ahead. Some only cost around $5 and they are not audible to the human ear. Plus, we need to SLOW DOWN when driving after dark on such roads. Papers never talk about this because it may not be popular. They always talk about the dollar value of damage to vehicles which should be insured anyway; they blame the animals who have been killed or injured and left to slowly die on the side of the roads. Please look at reporting different angles on these incidents and then perhaps people will learn to take more care and lives can be saved; both human and non-human. Pam.

I decided about 18 years ago after being a passenger in a car that hit a wombat on a country road at around 11pm that I would henceforth avoid driving in the country at night. It's been a good decision.This accident was practically unavoidable (or should I say inevitable?) as the wombat was not crossing the road but walking on the road in the same direction as our car was travelling. We had just a few minutes beforehand narrowly missed hitting another one. The last time (only a week or so ago) I took a car trip interstate I saw dead wldlife every few kms. I am never desensitised to this. It always upsets me. Our roads with fast vehicles are like knives slashing through wild life habtat