Note that Mr Abbott's 2010 policy on population growth still amounted to wanting to have his cake and eat it, in the sense of wanting 'sustainability' but growth at the same time. He does say, however, that "Australia needs a population that our services can satisfy, our infrastructure can support, our environment can sustain, our society can embrace, and our economy can employ." Unfortunately he seems to want to leave the judgement of what this is up to the productivity commission, which seems to be entirely incompetent to assess ecological sustainability. Will Mr Abbott toe the line of his political promoter, the Murdoch Press, by keeping Australian targeted for continuing overpopulation, or will he use his big majority to carve out something more democratic? Clive Palmer, probably correctly, described Abbott as a B.A. Santamariaist" on Q & A tonight. 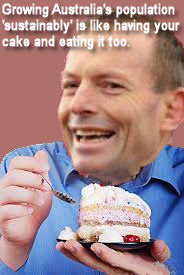 On Tony Abbott's websiste you can read:

Australia needs a population that our services can satisfy, our infrastructure can support, our environment can sustain, our society can embrace, and our economy can employ.

Australia's population growth since World War II has helped create the prosperity we now enjoy. Successive waves of post-war migration have expanded our capacity as a nation.

Under the Howard Government, our immigration programme enjoyed support from a majority of Australians who were confident that the programme was fair, competently administered, and delivering benefits to the entire community.

Under Labor, migration-fuelled population growth has caused Australians to become increasingly concerned, and to lose confidence in our broader immigration programme.

Under Labor, net overseas migration has risen to 300,000 people per year, against a long run average of around 140,000 per year. [Candobetter.net editorial comment: Actually it was more like 80,000 per year until Howard ramped it up, but it is true that it has increased even more under Labor - see Graph above, based on Australian Year Books and ABS stats].

At this rate Australia’s population would reach 42.3 million people by 2050, significantly above the earlier Intergenerational Report II (IGR) forecast of 36 million.

As a result, the quality of life for Australians living in our major urban areas today is under great pressure.
Fuelling population growth today must not rob future generations of the quality of life and opportunities we currently enjoy. That is what sustainability is all about.

On the eve of an election, Labor politicians have suddenly started to say they no longer believe in a “big Australia” – while cynically trying to put off any decisions on these issues until after the election.

While Labor may have changed its rhetoric under its new leader, Labor’s policies on immigration or population have not changed.

The Coalition believes it is necessary to ease population growth to deliver more sustainable population levels, based on our present and future capacity, so that our infrastructure, services and environment can catch up.

Unlike Labor, the Coalition’s population and immigration policy is clear.

This recommendation will provide a Coalition Government with the expert advice necessary to establish the framework for setting migration programmes.

The Coalition will reduce Australia’s annual rate of population growth from more than 2 per cent under Labor, to our historical long-run average of 1.4 per cent within our first term.

3. Make a Clear Commitment to Skills Migration and Regional Australia.

The Coalition will ensure that two-thirds of our permanent migration programme will be for the purposes of skilled migration.

A Coalition Government will also quarantine the level of employer nominated skills migration and 457 temporary business visas to at least the levels it inherits. In addition, the Coalition will liberalise arrangements for temporary business visas (457s) subject to clear standards, to make them more accessible to business, especially small businesses, and business in regional areas, with proven skills shortage needs. [= Yes, repeat No? – Mark’s comment]

To address the skills needs of regional areas and small business, the Coalition will encourage the settlement on either a temporary or permanent basis of new arrivals in regional and rural areas.

States such as Queensland and Western Australia will be afforded a high priority for permanent and temporary skilled visa applications.

A Coalition Government would also seek to resettle more entrants from our refugee and humanitarian programme in regional areas, where these resettlement programmes have proved to be highly successful.

4. Establish A Clear and Consultative Process to Restore Control

The Coalition will produce a White Paper on immigration that will reframe the structure and composition of Australia’s immigration programme to address the policy challenges of sustainable population growth.

A Discussion Paper will be released by the end of 2010, with a final paper to be completed by the Coalition’s first Budget in May 2011. This will help inform the composition of the 2011-12 migration programme.

Australians want their government to take control of population and immigration policies to restore confidence and ensure our immigration and population levels are sustainable and in the national interest.

The Coalition’s plan for Real Action on Sustainable Population Growth will restore confidence and re-establish consensus on the benefits of our immigration programme." 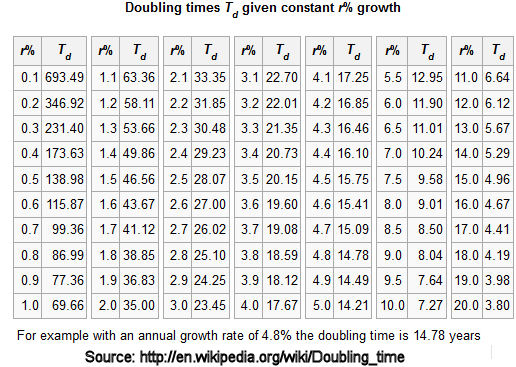