Geoff Brown the Stable Population Party candidate for the marginal seat of Lindsay is calling on the media "to challenge Fiona Scott and Tony Abbott about comments made on Four Corners last night by Ms Scott, the Lindsay candidate for the Liberal Party, that the traffic congestion plaguing the people of Lindsay is caused by 50,000 boat people." In the light of criticisms of Bob Katter for demographic ignorance, the silence on the same ignorance in the major parties is deafening.

Comment from candobetter.net: Indeed, it is staggering that politicians continue to be let get away with the pretense that all immigrants arrive here as asylum seekers, when far more people than 50,000 arrive each year and most of them are not 'boat people'. The Stable Population Party calls this 'the big distraction'. 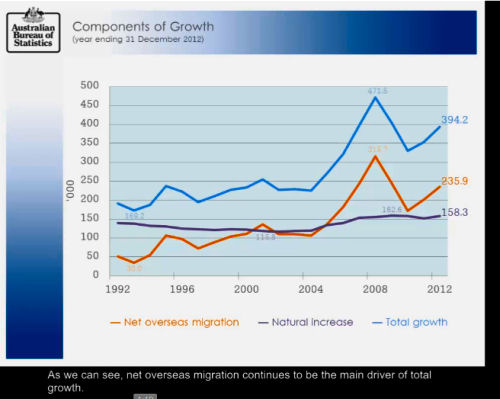 To clarify, over 300,000 legal immigrants arrived - mostly by plane - in 2008 and 235,900 in 2009, which is the latest statistic available due to changes in the way these things are now counted by the Australian Bureau of Statistics. Many of these legal migrants were invited by various state governments, which all have websites promoting immigration to Australia for professionals, tradespeople and investors, who then have the right to bring the balance of their families here.

“Fiona Scott has just cemented in the minds of all that watched Four Corners last night that the people of Lindsay are a bunch of ignorant rednecks. It was embarrassing to hear such divisive, politically cynical drivel being peddled as fact” said Geoff Brown.

“Fiona Scott in trying to defend her comments implied that the 50,000 boat people that have arrived since 2007 somehow all drive cars and live in western Sydney. Ms Scott went on to say that the 50.000 boat people was twice the size of Glenmore Park, a large Penrith suburb”

He said that the media needs to challenge Fiona Scott and Tony Abbott over these divisive comments about 'boat people'.

Pop growth 1000 day of which 2% are asylum seekers

"50,000 boat people over 6 years averages out to just 24 arrivals per day. This is dwarfed by the real cause of traffic congestion in western Sydney, population growth, which is running at over 1000 per day. The major parties, specifically the Coalition, are whipping up the voters of Lindsay into a frenzy about being invaded by 24 boat people per day to distract voters from the facts about population growth. As exemplified by Ms Scott they are using misinformation about the numbers of boat people to confuse and strike fear into voters to avoid scrutiny of their population policies”.

“If the voters of Lindsay want to take real steps to alleviate traffic congestion then they need to thing better not bigger and vote for the Stable Population Party”, Mr Brown concluded.

For any reader in doubt, they will find that the Stable Population Party handles this issue very well on its website: http://www.populationparty.org.au/Featured-Media?&riID=58

Deliberate misleading of the public or ignorance of the facts?

This sleight of hand screamed out at me, too as I watched last night's Four Corners program. Is Fiona Scott happy to let people believe that such a tiny percentage of people coming from overseas to Australia are responsible for the symptoms of over-population undoubtedly suffered by the people of Sydney? Alternatively,is Fiona Scott herself unaware of the sources of Australia's very high population growth ? If she is going to talk about population issues she needs to be properly informed. The misconception which she has perpetuated appears very prevalent in our community from my own observations amongst friends and people I meet. Understanding the numbers is critical. Since refugees are such a small percentage of our immigration and an even smaller percentage of our over-all population growth, how can they be significantly responsible for Western Sydney's traffic congestion? They are not.