New French Minister for Industry in France says globalisation is extremist policy and that France, Europe and other westernised countries need to protect themselves from total free-market doctrine. He also proposes external taxes, including on carbon emissions for imported products. This is a fascinating interview for citizens of Anglophone countries who feel that free-market ideology has replaced democracy. 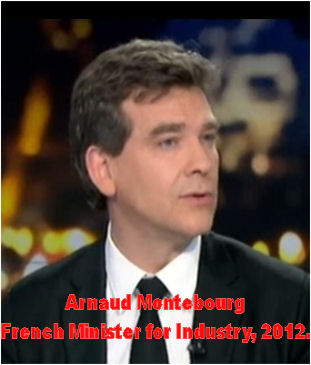 This is a transcript and translation of an interview with Arnaud Montebourg, the new French Minister for reestablishing manufacturing industry. The interview took place on France2's Journal Télévisé[1] on Thursday 17 May 2012 at 2000h. The interviewers were Julien Bugier (the news presenter) and Fabien Amias.

Interview with Arnaud Montebourg, the Minister for Reestablishing Productive Industry.

750,000 manufacturing jobs have been lost in the past
10 years and 900 factories have closed in the last three years in France. Ten years ago 28 per cent of France's economy was manufacturing. Now it is 13 or 14 per cent. According to Minister Montebourg, France is "deindustrialising even faster than the UK which has the reputation at the moment of having almost no manufacturing left at all."

Minister Arnaud Montebourg is the author of a book, Vote for Deglobalisation, published nearly a year ago.

He is quoted as saying in it, "Globalisation is nothing other than an extremist system."

He is asked by a France 2 news interviewer if he feels he can maintain the same position now that he is in government.

ARNAUD MONTEBOURG: "We need above all to protect ourselves. [Globalisation] is an extremism because without loyalty or law, without any limit, it has placed our territories, our industrial system, enterprises, wage earners - in direct competition with countries which have ... wages 30 times lower than ours.

Social protection there is virtually absent, whilst wage earners [in France] after two centuries of social struggle have fair working conditions. And this competition has destroyed our industrial system. Furthermore, it has not greatly progressed emerging countries either. Some countries have escaped [poverty] and others have not. They have become poor."

FABIEN AMIAS: "There are countries elsewhere where industry, as it has in Europe and France, has been reduced more than in France, despite being subjected to the same competition as their neighbours, [from] China, India, Brazil .."

ARNAUD MONTEBOURG: "It's true, because we failed to protect ourselves. The protection methods used by our competitors in that economic war are redoubtable. They use everything that we forbid ourselves to use! They control their money. Our money is left to a central bank that decides without consulting us. They use sovereign funds. We are at pains to control our businesses and we leave them, finally, to be treated as self-service by those who come and do their shopping in Europe and capture our technologies, send our patents away, and leave with them, after having closed our businesses and go elsewhere. Our work is to protect ourselves and to re-arm ourselves. That is the meaning of this 'reestablishment'of productive industry. We will reestablish industry if we ourselves find the resources in ourselves to reestablish it."

Question from JEAN-FRANCOIS ROUBAUD, President of The Federation of Small and Medium Businesses [Confederation General des Petits et Moyens Entreprises.(CGPME)]. "How do you expect to effect the reestablishment of industry in our country without the international exchanges that are necessary even if we would prefer not to have them?" [This question is answered much later in this interview.]

Montebourg is quoted by the interviewers as saying he would "Engage unilateral protection measures for renaissant industries." He is then asked for examples.

ARNAUD MONTEBOURG: "To start with, this is a European strategy. And Francois Hollande, besides, in his campaign expressed himself very strongly on the necessity that Europe, if she is to be 'Open' should not be 'offered'[like a sacrifice]. Today we are unprotected against globalisation. [He uses the metaphor of a 'globalisation sieve'].

EVen the European Commission is now recommending greater protection than any that existed before. Let us be clear. It is about reorienting the European Union which is currently as ineffective as a sieve against globalisation. And we will need to ask for reciprocity: that which the Chinese, the Americans, the Brazilians --.

The Brazilians have just decided come up with an incredible strategy: they have decided to tax every iPhone made by Apple in China that comes across Brazilian borders. The consequence is that Apple has decided to build a factory in Brazil. It is obvious that the European Union alone in our European continent has the power to do that. Therefore ..."

FABIEN AMIAS: "That means that we ... that Francois HOlland, the head of state, and the government and at the European level ... that kind of protectionism ...that kind of tax for every product that is produced..."

ARNAUD MONTEBOURG: "We spoke before of 'extremism'. Globalisation without limit is extreme. It has to be moderated. And I want to reply to Mr Roubaud [Refer above], by saying to him that we will not manage to survive in exports on the world market whilst wearing crutches while others are using rollerskates. We would remain handicapped. So we have, in a way, demanded what Francois Hollande has called 'reciprocity': That which you do to us, we demand the right to do it back."

ARNAUD MONTEBOURG:"It's already on the agenda. For example, the Carbon Tax - rather than inflicting it on ourselves ... we are talking about an external tax!"

FABIEN AMIAS: "Which was revoked the other day by the Constitutional Counsel ..."

FABIEN AMIAS: Gestures an apology, and for Montebourg to continue on...

ARNAUD MONTEBOURG: "What I want to say is that these are measures which are being put in place, including in all the European countries. It is part of the European discussion about the reorientation of the European Union."

FABIEN AMIAS: "Procedure. You have spoken about procedure: 'Anti-dumping French-style'. That is, we no longer sell to those who practice disloyally low prices."

ARNAUD MONTEBOURG: Nods. "I can tell you that even President Sarkozi thought that it was necessary to use French companies for all French public purchases, that is to say, a kind of protectionism. So, today, there is a movement in all westernised countries that have lost their manufacturing industries, to organise a bit of protection!"

FABIEN AMIAS: "I have a very specific question. The Post Office very recently chose to use Taiwanese motor scooters, to the detriment of Peugeot scooters. If you had been Minister for Industry at that time, would you have allowed them to do that?"

ARNAUD MONTEBOURG: "I think that our responsibility is to reorientate public purchases towards our small and medium enterprises, which need the state to purchase [from them] in order to grow, expand, hire staff, get market share, augment their margins, in order to develop in their territory in their turn. So, this project is a project which will require that the European Union evolve its totally economic liberal doctrine. That is, the doctrine that says,'Listen, it's forbidden to give preference to to local industry.' We wish to advance this debate and I believe that opinions are evolving in Europe."

French News from yesterday on France 2. French government is proposing to reduce family allocations - meaning payments to families for children - based on means. After the first oil shock in France (and most countries of the E.U.) the French birth rate dropped like a stone, and so did immigration numbers. This Malthusian response to future scarcity is typical of Western Europe, indeed of almost anywhere except the Anglophone countries.