Where's the balance?? Koalas vs Developers in Australia

I was moved to investigate further when on April 5th candobetter.net received an anonymous comment, entitled, "Koala left clinging to a tree after land clearing." A link to a photograph of a koala clinging to a tree in a recently cleared paddock showed that someone had actually managed to get photo-evidence of the sickening process of koala extinction - for unwanted development - which goes on under our noses with the blessing of the Queensland Government.[1] 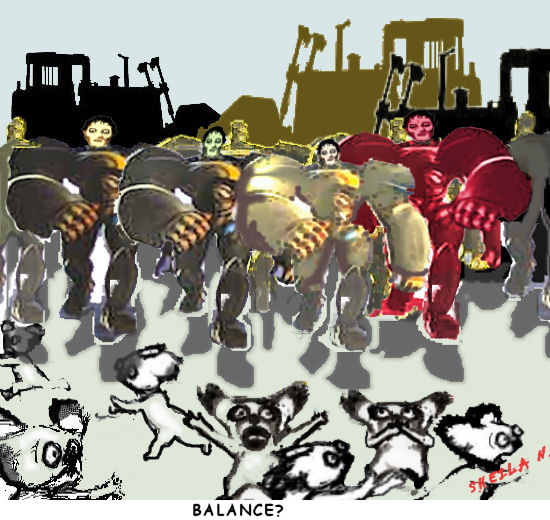 Development in Australia is plain scary!

The photographed koala is just one of the many disappearing (starved, run over, mauled, exposed) koalas on the Queensland Goldcoast, where greedy developments are, ironically, absurdly, destroying the beauty and space they advertise in their brochures. There are no effective laws to stop them in Australia. What is more, the State government in Queensland and the state governments in all the other states of Australia operate like land-companies, making laws to privilege development and ensuring that environmental laws have absolutely no teeth. The justification for such developments is to accommodate population growth, but it is the development lobby that causes the population growth to be politically engineered simply to keep up demand for housing, and to provide an excuse for the intolerable rate of ecological destruction.[2]

As Vivienne Ortega wrote in her admirable article, "Koalas on the edge of survival precipice" on the subject of koala extinction, "There is no way koalas can evolve and adapt fast enough to overcome roads, logging, land clearing, invasive species and pets. The only way koalas could “win” is if they had machine guns to protect them!"

The entity directly backing the development destined for the koala habitat in question is the "Perron Group", which describes itself as "a privately-owned Perth-based Group of Companies owned and controlled by the Chairman, Mr Lloyd Stanley Perron AM." [AM stands for 'Member of the Order of Australia'. Wikipedia describes the Order of Australia as 'an order of chivalry established by Elizabeth II, Queen of Australia on 14 February 1975 "for the purpose of according recognition to Australian citizens and other persons for achievement or for meritorious service"'.]

The Perron group, by its own account, has invested more than $30m in the project which is responsible for the destruction of koalas' homes in an area where the species is severely threatened in a world already over-run with people and suburbs.

The group describes its project as "a world class example of a sustainable master planned community for future generations of Australians."

The intention is to build 3,500 houses on this precious native habitat with a long history of being protected and of continuing community support for its protection.

Let us pause for a moment and consider what the notion of a 'master-planned' 'community' must mean to the citizens in the area who may have believed they had self-government, where members of the elected council, such as Councillor Ted Shepherd, have been trying to fight for their rights and for koala and other species habitat since this development application was first proposed. Ironically millionaire Bob Anthes, in a land where money almost always means destruction of wildlife and democracy, had kept this land safe for nature up to his death in 2004. Then, according to Melinda Marshall's article,

Mr Alston was quoted on 14 December excusing his actions by saying, "You have to have a balance of natural and human habitat," he said.

What sort of 'balance' is extinction? As Vivienne Ortega writes in "Koalas on the edge of the survival precipice,"...., "The only way koalas could “win” is if they had machine guns to protect them!"

If you want to stand up for the koalas, you can leave comments here for the Perron Group re its "Pacific View Estate." There are a few already, to the effect that just because it's 'legal' that doesn't make it alright. And there is a sad little argument to the effect of, "We cut the trees down for rural management, but we agree with you that farming isn't a good idea so close to urban development, that's why we are putting more houses there." (!)

This description would also suit TEPCO's business in providing electricity to Japan.

Mission Australia describes itself as having a "founding purpose inspired by Jesus Christ," and that, " Mission Australia exists to meet human need and to spread the knowledge of the love of God'. Furthermore it claims that its "vision" is "to see a fairer Australia by enabling people in need to find pathways to a better life'".

Well, maybe with 'visions' you don't need to look at reality.

Does Mission Australia really think that Jesus would endorse the desecration of the natural world, the extinction of species, the razing of forests, and the abrogation of community self-government through commercially "master-planned" communities dominated by transnational corporations?

Talk about building temples for money-changers! I won't be making a donation to Mission Australia if this is what it supports.

Other organisations involved in this Pacific .... Project.

DPZ Pacific says that its "mission" is "to design and build communities in harmony with the environment in the world’s most dynamic regions for growth." It's a bizarre mix of words, isn't it? I guess you could take it to mean that DPZ Pacific considers this region not for its biodiversity, but for its population growth trends. Thus, to be in harmony with marketed demographic projections, there is nothing wrong with paving over the trees, starving out the koalas and stuffing up local self-government. What is this? Leggoworld? Are the people and their elected representatives just some kind of transformer toys there to animate a sandpit?

DPZ Pacific: "DBIDBI Design," not exactly what you would want for a natural environment, this architectural firm, going by the photos on its website.

Ocean Park Consulting's extensive professional experience in major land development and infrastructure projects facilitates early recognition of potential project constraints and opportunities and allows for development of effective management strategies to ensure positive project outcomes, to strive to achieve a balance between the needs of the natural environment and the human environment. "

That word, "balance" again, in such an unbalanced project of machines against nature.

James Warren & Associates is described on the site as "a specialist environmental consulting company which has been operating since 1987." It is claimed that "JWA have completed a detailed assessment of the Ecological Values of the Pacific View Estate site" and that the company has "identified the potential impacts of the proposed development on these values and have recommended various mitigation measures" and that "in consultation with the team of experts, JWA have assisted to design a concept plan that provides for the conservation of the ecologically significant values occurring on site."

Wonder what they had to say about the koalas and chopping down all the trees? Speak up, James Warren and Associates! Are you pleased or did they ignore what you recommended?

(Then again, how can anyone in this group speak up? Their livings depend on this process continuing. So someone else has to stop it.)

John Wood Consultancy Services was established in December 2000, as the Principal Recreation and Environmental Planner with EDAW (Australia) Pty Ltd. On JWC's site there is a notice which states that the operator is "a current member of the Queensland Outdoor Recreation Federation" and explains that all such members "have agreed to abide by QORF's Code of Ethics." If you go to the site that lists those ethics, which are quite admirable. It is therefore surprising to see that one of their members should be associated with a project which is now linked to destruction of koala habitat and the razing of trees on a property once known for its conservation values, now transformed into a corporate vs community battleground.

Bitzios Consulting is an Australian traffic engineering and transport planning consultancy that operates on an international scale.

Cardno: Grogan Richards Consulting Engineers has merged with transnationals Cardno, an "infrastructure services firm" which, like others on the Pacific View Estate, professes to be creating "better communities across the globe". Its "client base includes builders, developers, shopping centre owners and managers, local government, government departments, architects, manufacturers, retailers, town planners and the legal profession."

Acoustic Logic Consultancy - more engineering and construction of a specialised nature. "With the implementation of this wealth of knowledge and experience, ALC and the Pacific View Farm have endeavoured to ensure that this project will not have detrimental acoustic impact on the future and existing residents of Worongary."

With such a corporate army of spin-doctors and built-environmentalists what hope do koalas or democracy have? In fact the koala might well stand for local democracy because both democracy and koalas are doomed in this commercial transnational environment, with its practitioners determined to ram their steel constructions down the locals' throats with the saccharine-sugar coating of a few promised 'jobs' which may well go to imported labour.

Oh what evil in Australia is done in the name of "jobs", where once there was land and food to spare and the possibility of a just society.

The Gold Coast Council administers a once-magnificent part of Australia and oversees a great deal of callous destruction and environmental degradation in the name of continuous population growth - which most people explicitly reject in polls.

The growth is driven by investors who only see the returns on their balance-sheets and apparently lack the wit to examine the greater costs - to social capital and local, national and global biodiversity. This tragic process which currently entraps Australia was magnified to greater heights than ever before in the mid-1990s, as the global internet took off and as the last feeble obstacles to foreign purchase and investment of Australian real-estate were removed. Policies were put in place to turbo charge the financial turnover on an international scale, leading to the so-called global financial crisis. But we are dealing with addicts here, so the crisis machine was cranked up again with public money.

The homes will be bought by outsiders mostly, with no knowledge, loyalty or emotional investment in the community - rather like the developers, one suspects.

[2] I recently talked with a lawyer who had just graduated from a post-grad course in Environmental Law. I asked her if there was anything in it. "Nothing," she said. "Absolutely nothing. It's completely shocking!" She added, "I took the course to see if my first impression was really true, that the environmental laws in Australia didn't work. And it was true! We have no environmental law!"

"In the affordable housing sector CRA Group works closely with providers such as Mission Australia to achieve workable delivery models that accommodate key essential workers and promote the social values of true communities". (According to the Pacific View Estate website). It seems that there are other parasitic "not for profit" or "community" businesses "helping" to provide affordable housing to the community, because of the great need. They are leaches like the Committee of Melbourne and the KPMG groups, under the cover of helping Melbourne's community but with interests in their own profits. Mission Australia should be targeting the root cause of declining living standards and housing affordability - population growth - rather that advancing social housing! If they are really accountable to Christian principles, how could they justify destroying prime environmental landscapes and wildlife habitat? These Pharisees are gaining political points, under the guise of a community service, but it hides the corruption of terror on the environment and the habitat of our native koalas. Mission Australia are aligning themselves to the god of mammon, the Ponzi scheme of promises of riches through population growth. As the synod of the Anglican Church said last year, our population growth is stealing from future generations. There will be little opportunities for growth for the next generations due to the greed of the leaders in this generation maximizing our numbers, and causing Australia to have the dishonour of having the largest mammal extinction rate in the world!