Supermarkets acting as a cartel against farmers, cows and the rest of us

"Anyone who has been to Coles or Woolworths in the last few weeks would know of the decision by the retailers to slash the price of their home brand dairy products, and it seems more of this is on the way in regard to baked goods. This has been described in some circles as a win for consumers, but in the longer term I am not sure that will be the case," said Mr Pakula. 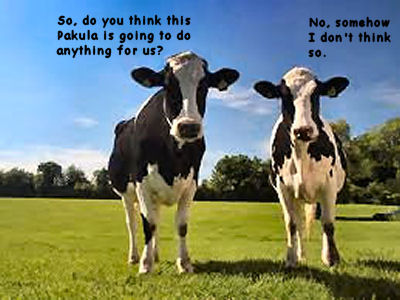 Like other people I have noticed that prices are rising in supermarkets. The prices for dairy rose markedly during the long period of drought which has only recently been broken by floods. At the same time, I noticed that supermarket brands were far cheaper than other brands of cheese and milk. It was very tempting to buy, for instance, Coles cheddar cheese, because it was several dollars cheaper than something like Crackerbarrel.

I wrestled with my conscience because I knew that the 'bottom line' in the case of dairy products was cows. The cheaper the cheese the worse for the cow. Cows are so badly treated that any worse treatment seems inconceivable, yet there seem no real limits to how badly commerce will treat the creatures it relies on for its bounty. Only government can legislate and enforce better standards for animals, but unfortunately they seem to do the opposite in this country because they focus on so-called efficiency over the meanest standard of decency. Only the other day we published an article on candobetter.net about how industry and government want to change laws to give permission to treat bobby calves so badly that they have a good chance of dying before they even get to market.

Prices for milk and agricultural product began to rise quickly as population began to grow in Australia and, in Victoria, as the Labor Government joined forces with corporate interests to take over farmland, using strategies like removing control of water from family farms and repackaging it at different prices according to opaque measurements of industry values. Corporate bidding pushed up land-prices and this eroded profit margins for farmers. If the price of land goes up, everything else does. Who pays - besides the farmer? Livestock do. Only the big corporate agricultural holdings can survive and then only in the short-term, but the corporates are only there for the short-term, to make a killing.

How low can you go?

I know it can get even worse for cows because in the US they are sometimes milked as frequently as four times a day, causing their skeletons to break down[1] and they die or are killed around the age of four. Imagine the arthritic pain of constantly breaking bones.

In Australia cows often live to be eight. A very old cow may reach twelve. Some cows, however, have lived to be over 30. (Here is a lovely story about one in Australia who was saved by a livestock agent and resides with an abattoir owner.) Search and you will find the same for many other species. Such discrepancies in life-expectancy are an indication of how bad the effect of our industrial 'efficiencies' is for non-humans (and not so great for humans either.)

Below is Mr Paluka's statement, which describes a big problem in the centralisation of markets where individual farmers are disempowered by the more easily self-organising retailers.

In the end, supermarkets remove choice

"Anyone who has been to Coles or Woolworths in the last few weeks would know of the decision by the retailers to slash the price of their home brand dairy products, and it seems more of this is on the way in regard to baked goods. This has been described in some circles as a win for consumers, but in the longer term I am not sure that will be the case.

The retailers have enormous market power, far more than the multinationals that Coles CEO Ian McLeod talks about, and they use it ruthlessly. Many of the manufacturers who supply branded products — like Pauls, Pura, Devondale, Western Star and the like — also supply Coles and Woolies home brand products.

So the retailers saying they will not cut the price paid to suppliers for branded products is hardly the point. As supply contracts expire, the substitution to home brand products will inevitably impact on the price paid to manufacturers, the security of hundreds of Victorian jobs and the viability of primary producers as well. If the dairy suppliers got together and agreed not to sell to the retailers at a price below X, they would almost certainly be prosecuted by the Australian Competition and Consumer Commission for collusion and would more than likely be convicted. But the behaviour of the retailers looks a little bit like predatory pricing, and perhaps it is time the ACCC took a look at that as well."

Martin Pakula (ALP) was appointed Minister for Industry and Trade and Industrial Relations in 2008. In January 2010, he became Minister for Public Transport. He is currently in the opposition.

[1] "Nutritional Disorders
Numerous diseases and conditions can occur within a cow’s skeletal system if the cow’s immune system is weak or if the cow is malnourished. Milk fever is one condition that affects cows when calcium leaves the bloodstream to support milk production faster than calcium is put back into the bloodstream through eating. The result is a muscular and skeletal breakdown, resulting in the cow being weak and unable to stand. Ketosis is another disorder that affects female cows in early lactation. By drawing body fat to help meet the energy needs of milk production, central nervous systems can become dysfunctional, causing cows to stumble, lose their appetite and become weak."

Money must be recouped somewhere

Cheaper milk and livestock prices means that farmers must recoup their money from somewhere. The most vulnerable in the supply chain are the animals. Bobby calves have no voice, not status, no rights. By allowing more "efficient" handling and 30 hours without food, they are to bear the burden of cheaper milk prices. Also, cows themselves.

It is totally unfair to open Australian dairy farming to the global market when costs of land, power and water are so much higher in Australia than nearly everywhere else. As dairy farmers struggle to survive in this cut-throat environment, it is the cows that will suffer even more than they usually do. This thought keeps me awake at night. It is truly grotesque that globalisation is going to force farmers to the wall and cows to the abbatoir. On the way they will be overmilked, causing their skeletons to break down and farmers to give up the few shreds of humaneness that have survived in the industry to date. This situation highlights the totally immoral and arbitrary nature of globalisation. Our only defense is to call for laws to protect animals and the industry. We need to take back power locally, but that means that most of our politicians have to go. We need to start again. And the media also needs to be replaced because it just accepts or possibly dictates this new hellish status quo. http://adf.farmonline.com.au/news/magazine/industry-news/general/fonterra-says-farmers-must-face-reality/2752610.aspx

Fear for well- being of dairy cattle

I have friends who are dairy farmers. They are Catholic and as such, for them, humans are in a special category. They are nice people but I would say to some extent they are “pragmatic” about the rights and sensibilities of the large animals that they exploit. I worry even in the hands of these nice people, that under economic duress, the well- being of their children will come before any consideration for their animals. To have even the possibility of reasonable outcomes for farm animals , farmers need security and not to have the rug pulled out from under them with impossibly low, uneconomic milk prices.