This article started off as a comment, but I wanted to put in some shots of the film I mention, which isn't possible in the comment mode. I was initially commenting on the story by John Marlowe, "One man dead, one critical after brawl, but the media suppress the fact that it is ethnic violence."

Sorry about using 'ethnics' as a noun, which always sounds illiterate and prejudiced, but I wanted a short title.
I think it is important not to label as 'ethnic crime' crime which is perpetrated by people who are identifiable as part of a cultural minority, unless the crime is related to that culture and would not have occurred without it. For the purposes of safety and identification, however, useful descriptions are necessary.

We should also bear in mind that the biggest crimes are usually corporate or state ones because they involve the most damage and the most money. They rarely get prosecuted, except by revolutionary tribunals. And, yes, of course 'crime' is a social construct which can vary quite a lot depending on the society.

Crime on the margins

One could also talk about higher rates of crime in people on the margin of our society and note that a proportion of these people are immigrants - who have to start out on the margins, since they are newcomers, and who therefore don't necessarily have the usual social connections and knowledge that people born here may have (apart from those who are also on the margins, for whatever reason.)

Because there are so many immigrants at the moment, there must surely be a much larger number of people on the margins who are recent immigrants. That means that they will be vulnerable and that a certain number may be desperate or exploitative. I am not claiming any scientific quantitative data on this. A government response would no doubt talk of how we are 'encouraging skilled immigrants' who can provide for themselves, but this would ignore the foreign students who struggle here.

This is not to label all immigrants as marginalised forever.

More Australians are also drifting into those marginal and vulnerable areas because they do not earn the kinds of incomes that will pay for rent and food in our society, even if they can get jobs or the dole (and quite a few immigrants cannot access the dole or medical benefits).

I can already see a rising sub-class producing and growing drugs, including tobacco, cannabis and amphetamines, simply to survive and pay for shelter. I have long-term occupational connections in the field of psychiatry and I know people who have been on the pension with psychiatric and other disabilities who have accepted the need to beg and to engage in criminal activity from time to time. Population pressure leading to huge housing costs makes this inevitable.

Then there are the young victims of the drug trade who didn't start out marginalised.

I recently talked with an apprentice in an industry where people start work at about 3am, who had been given some amphetamines to help him stay awake, and who had become addicted very quickly. He also had become psychotic due to the speed. He had learned that, in order to be able to pay for the speed, he had to sell it, since apprenticeships don't cover the cost of drugs. After that he realised that he could make a lot more money out of selling speed, but he also realised that he no longer had the choice. He began carrying guns, partly because he was paranoid due to the use of the amphetamines and partly because it is the culture and partly because of the violence in that drug culture. He knows that if he doesn't stop using amphetamines his risk of dying early in a violent incident or from heart problems is racheting up daily. He could go to Narcotics Anonymous - which costs nothing and doesn't dob you into the police - but it is so much easier, in the short term, to take the path of least resistance and keep on taking the drug. And, unfortunately, the chances of his being around for a 'long-term' solution are diminishing. 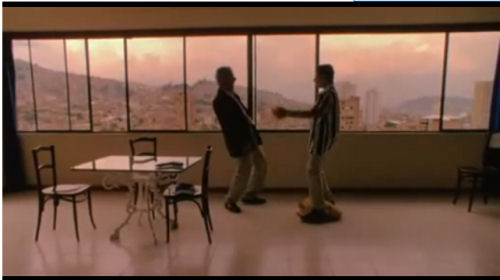 Recipe for a violent society

You have there the recipe for a very violent society, like the one in Columbia, for instance, as portrayed in that amazing film by Barbet Shroeder, La Vierge des Tueurs [The Killers' Virgin Mary or Our Lady of the Assassins/Killers] based on the book of the same name by Fernando Vallejo. In that film the central character, who lives in a large bare fortified apartment overlooking a big hill covered in dusty slums by day and flickering lights by night, remarks how years ago there were cows there. 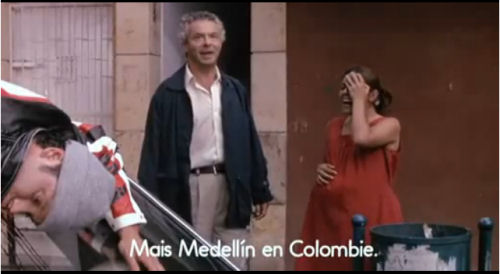 Same film: A pregnant woman just learns of the violent death of her son in an impoverished and disorganised city where the birth-rate and the death rate have a cruelly ironical connection

Columbia is full of young men killing each other in gangs and lone women bringing up families in slums where the male children don't last for very long and the girls get raped or married and finish up in the same situation.

Every so often we hear celebrations and see fireworks shooting into the air between the hill and the apartment. The narrator explains that the fireworks are a signal that another drug courier has managed to get his load into the United States successfully.

To compare this scenario to the situation in Australia may seem fanciful, but without equality and democracy and with overpopulation and poverty, that's the way things go. There has always been a small sub-class like that in Australia, but circumstances favour its expansion.

Overpopulation is one of the main subjects of the film.

I wanted to write about this film because I think it is a great and intelligent film. I have described it from memory because I saw it years ago. At the time it was in Spanish with French subtitles. Looking around the net I can see no English versions, but there must be some with English subtitles for anyone who would like to take a look at this film.

I should add that I read some time ago about a good population planning initiative in Columbia - in Bogota, I think, in a Worldwatch source. They were providing sexual health clinics for men as well as women and the men were choosing not to have children after a while and taking responsibility. Unfortunately I cannot find the source.