Hullo Argentina. Look at yourself in this mirror and weep.

Are vets in Parana Argentina making money out of unspeakably cruel animal 'shelters'?

Paraná is the Capital City of the Province of Entre Ríos, located in the North East of Argentina. Canadian Voice for Animals write that, "It has been a No-Kill city for more than 10 years but has a non-existent policy for the neutering of strays."

Because of these policies the number of unwanted animals has got out of control. Canadian Voice for Animals-Argentina say that they had foreseen this situation and had tirelessly tried to focus the attention of local authorities on this problem, with no success whatsoever.

Canadian Voice for Animals reports that the Paraná authorities are now planning to open a super-shelter in Paraná in order to clean the city for tourism.

"In this dark hole hundreds of poor souls will be cramped and starved to death."

They say that this will only be a magnification of shelter policies and practice in many other localities in Argentina.

"How do we know this?" they write, "Because it is already happening in every single municipal super-shelter all across this country. These living hells are located all over the country; all of them run by veterinarians and where no animal advocate can get access."

They ask us to "See for yourselves". 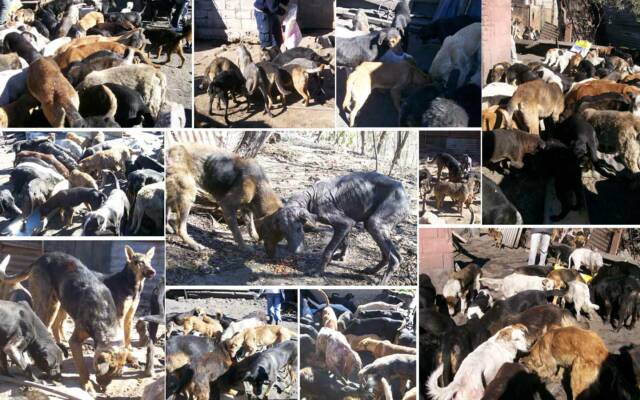 "Animals piled up and exposed to a sure death due to fights for food which is always scarce and illnesses. All this happens in municipal shelters run by veterinarians and sponsored by municipalities in Argentina."

Canadian Voice for Animals wrote on 25 August 2009 that they heard about this project three weeks ago. They say that they have been fighting to halt the building of the proposed super-'shelter' since then. They call the shelters 'death camps'.

Three people featured in the Spanish version of this item are Gabriela Garayalde, who is described as the designer of the project and accused of being without experience in running refuges, and Rosario Romero, from the School of Veterinarians and Dr. Izza, Secretary of Municipal Health.

The report from Canadian Voice for Animals describes concerns that public funds are being used for a less than transparent process which is itself unspeakably cruel.

They relate that the mainstream media is steering clear of the affair and that doors have been closed against Canadian Voice for Animals - Argentina's sincere enquries. 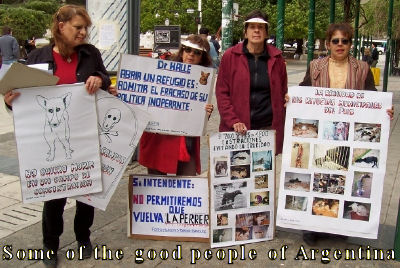 For this reason the group has started a campaign in the streets to warn residents of what is afoot. They say that the project is running under the flag of "A Roof for Four Legged Homeless Foundation." They describe this foundation as "a so-called group that was created overnight and run by people who have no idea about animals and whose sole idea is to keep the streets cleared of strays".

"The Secretary of Cabinet has [told] the press that the project does not exist, but we have a copy of the project plans which were presented to her and the mayor at that meeting. She has gone even further; she has stated that the project was not feasible because this so called foundation has not got a charity number but the sad truth is that the very same day she was saying that we received a legal document coming from this foundation threatening us to shut up otherwise we would face charges in court. The courts of course is exactly where we want to dismantle this monstrosity."

"The Mayor and his wife, the secretary of the cabinet, received these people and listened to their proposal,despite the fact that we have requested hearings for more than 2 years and they have never answered any of our requests. We have learned that the city hall has decided to give them a piece of land to build this despicable place that would be sponsored by city hall and companies associated with tourism."

Easier, kinder, cheaper solution would end the problem in 4 years

What Canadian Voice for Animals - Argentina and the ArgentineNetwork of No-Kill Associations have proposed is massive spay/neuter programmes based on the TNR (TRAP-NEUTER-RELEASE) technique which they say has been proved effective everywhere.

"We need municipal veterinarians operate on 70 pets five days a week and we have estimated that the problem will be solved within four years."

They say that this failure to look at a sane and humane solution is the basis of their protest. They think that one of the reasons these shelters 'flourish' is that they offer mean people a chance to get money from the government to 'manage' them. They ask people all round the world to look at the pictures and sign the petition. In this petition they ask the council to stop the Mayor and this Foundation from starting their project.

Neutering works where I live

Tim I think that you need to justify your remark that trap, neutering and releasing is inadequate. Put it in perspective: is it better to do nothing and then to torture and starve these animals? I find it rather hard to understand your focus. In Victoria, Australia where I live, there are hardly any strays now because all cats and dogs have to be registered; the number you may have in a house is limited, and cats are curfewed. You need to be licensed to breed cats or dogs. It is virtually impossible to get a free dog and if you go to an animal shelter there are not many animals and you pay about $300 for a dog - slightly less if it is elderly. That includes the price of desexing. I am aware of this at the moment because I have been looking for a dog at the shelters. Unfortunately I cannot take just any dog due to the age and fragility of my current elderly dog. Sheila Newman, population sociologisthome page

Thank you on behalf of our strays