A rally was held today on the steps of Parliament House in Melbourne " to protest against new laws proposed by the Napthine government which are undeniably bad news for forests. 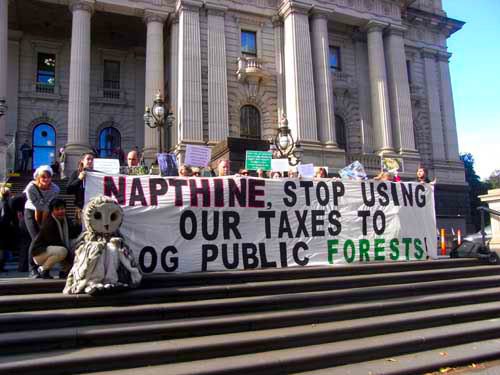 A rally was held today (7 May 2013) on the steps of Parliament House in Melbourne.

According to Jill Redwood of Environment East Gippsland, ‘Infinity logging’ is the new law proposed by the Napthine Government. If passed the Bill will formalise a new ‘cut-out-and-get-out’ style of forest management in the short term as well as pay millions to the logging industry in the long term.

The proposed Amendments to this law governing native forest logging will hand full powers to VicForests (the profit-driven semi government entity in charge of logging public forests) and it will expose the state of Victoria to payouts to the industry players of hundreds of millions. This change to the law mirrors closely what the logging lobby group, AFPA’s submission demanded.

"The changes would:
1. Promise unlimited logging contracts (currently licenses have 5 year reviews).
2. Remove government oversight of VicForests’ activities.
3. Effectively privatise the exploitation of the state’s most valuable public natural asset.
4. Promise to supply logs into the future that may not exist, due to fire, drought regeneration failure and so on.
5. Expose the tax-payer and government to paying hundreds of millions in compensation when/if the trees can’t be provided .
6. See forests managed by purely commercial interests with token to no concern for environmental, tourism, heritage, aesthetic or water values.
7. Make it impossible to alter the law if the wood/trees have been promised to a private company by VicForests. The government must provide the logs or pay massive compensation.
8. Allow VicForests Board of Directors to decide when, where and how much it will clearfell .
9. Override and ignore the Auditor General’s current audit of VicForests’ management and the recommendations that will come from it.
10. Remove environmental oversight of logging in native forests.

VicForests has been found to be consistently over-logging, logging unlawfully, unaccountably and in the face of enormous and escalating community opposition. They are last entity that should be trusted to manage logging our public forests!

This proposed change of the law hopes to encourage even more destructive industries to use forests as a feedstock for biomass burning for electricity and processing into fuel. (Timber Industry Action Plan. Dec 2011). Hence this ‘overkill Bill’ to entice prospective investors and industries that want wood as a raw material."

I saw about 40 people for this rally on the steps of Parliament at about 1.30 p.m. and one human sized owl. A later rally was going to take place around 3.00pm and the parliament was to debate the law this afternoon. Go to the website of Environment East Gippsland http://www.eastgippsland.net.au/ to see what you can do

A policy to lock in over-logging and infinite forestry is destructive madness! It's not policy but malice and greed for short term gain that can't be maintained or sustained. In a world of finite and diminishing resources, we should be conserving and protecting our environment even more, not just raping and pillaging what's left. It's as if our governments know that our time on our planet as it is is short, and they are about to take what they can. Scientists must realize that we as an ever growing resource-hungry population, must learn to live in Harmony with the Earth. If you become an environmentalist you always come up against resistance and opposition because of vested interests in "jobs". "growth" and "economic benefits". We as supposedly 'intelligent' life forms, must change our self-serving ways in order to see a change in our future. It's amazing how Human nature allows us to rape and pillage and pollute and destroy our own environment (Gaia – Earth - Planet), before we look back and realize it's too late to undo that damage. The whole ecological world has been severely compromised, as well as our enjoyment of our only home Planet. What other species should overpopulate and destroy their only home, except mindless bacteria or viruses? Unlike colonial invaders we can no longer continue to rape and pillage our natural world for political power and quarterly balance sheets without paying a devastating price. “In politics, stupidity is not a handicap.” ? Napoleon Bonaparte Obviously the same applies today. We allow the inept to control our lives, our finances, but our forests and environments in the hands of politicians is even a greater disaster! Their jobs are evaluated by growth, GDP, productivity and jobs - not conservation, respect for Nature, long term planetary goals or even long term survival on a planet facing climate change and increasing extreme weather events. Forests and pillars of stability, and climate regeneration, and they should be preserved as natural heritage of future generations.

This week, the Victorian state government's logging agency, VicForests, sent logging contractors into one of the last mature and unburnt stands of forest in Toolangi, near Healesville. The Wilderness Society: Toolangi's forest sanctuary disappears Nolan's Gully was one of the areas that was spared from the 2009 Black Saturday inferno. It’s a beautiful, mixed forest where pristine rainforest gullies and towering Mountain Ash trees coexist in quiet harmony. Nothing stays in pristine condition in Victoria! The machinery of VicForests means that logging will continue at whatever environmental or economic loss. Areas like Nolan’s Gully are critical to local biodiversity too, particularly the endangered animal emblem of the state – the Fairy (Leadbeater’s) Possum – of which fewer than 700 are thought to be left in the wild. The fact that this possum is Victoria's faunal emblem is an irony that isn't lost. Surveys show that the tiny possums are certainly living in Nolan's gully. VicForests have chosen to ignore them and continue on with their destructive, irresponsible and potentially illegal practices. One day of logging devastated the area! This logging, which is occurring in many other native forests across the state right now, is driven by Australian Paper's insatiable demand for cheap pulplogs from our publicly-owned forests to make consumer products such as Reflex office paper. These forests cannot be replaced as they take hundreds of years to grow and provide us with water catchment areas. Sign the petition. Defer the Bill that would lock-in long-term native forest logging

'Infinity' logging bill - Important strategy you can help with

An update on yesterday’s gathering at Parliament House. There was a presence all afternoon from 1-5pm on the steps of Parliament House. But the appalling new logging law Bill went through the upper house without amendment. It will now be sent to the lower house possibly in the week of 28 May. It will likely pass without any difficulty – unless someone crosses the floor. More details below and please sign the cyber petition to help convince Geoff Shaw to consider what this Bill will mean – financially if not environmentally. John Lenders (Labor) moved that it be referred to committee but the vote was split 18-18, so failed. He then tried to propose 3 amendments but each was defeated. Greg Barber (Greens) spoke strongly against it and asked questions that the Lib/Nats couldn’t answer. Lenders spoke up too. Greg thanked all the forest supporters who attended. He says it's rare to get such public interest and he really appreciates it. There is a rumour that people who tried to get into the PUBLIC gallery were told only friends of Dr Napthine's could get in! The Greens sorted out security and about 40 supporters sat and heard the debate.Please keep promoting the petition at http://www.change.org/en-AU/petitions/defer-the-bill-that-would-lock-in-long-term-native-forest-logging - we have almost 4000 signatures. Hitting double digits will help convince Geoff Shaw to cross the floor. Email Geoff Shaw If people are in Geoff Shaw’s electorate – we desperately need you to gather friends/family and go see him, write a letter or call him. This could be the only chance to stop this Bill going through.

Loggers will own Victoria's forests

The Victorian Government is on the verge of handing over control of the state's forests to an unprofitable, poorly-regulated logging corporation - potentially for decades, writes Nicholas Croggon. newMatilda.com The State Government has put forward a new bill, debated in Parliament 7 May, to provide "security" for Victoria’s logging industry – which, in other words, means giving away our native forests to be logged for the foreseeable future. In Victoria, the government owns all state forests, and permits logging in certain parts of the native forest estate by VicForests, a state-owned enterprise. As you would expect, the government has responsibilities to manage Victoria’s native forests in the public interest, and the interests of the environment. Under the current law, the government flags forests for VicForests to log in an Allocation Order. Then, VicForests must every five years submit a plan listing each of the forest coupes within this area that it wishes to log, which government can approve or reject. Only after this second step does the timber become the property of VicForests. Under the new law, the government will no longer have the power to review these plans. Instead, they will simply approve the Allocation Order, and the large areas of forest stands mentioned in the order will belong to VicForests. VicForests will be left to decide which coupes within these stands to log, and when. The Fox will be in charge of the Chickens! It's a fast-tracking of logging approvals, and getting rid of cumbersome "green" or "red" tape causing excessive administration to our State government! It will instead have to rely on monitoring VicForests’ performance against existing environmental controls. The problem is that existing environmental controls are inadequate, and out of date. For example, the Leadbeater’s Possum Action Statement, which supposedly protects Victoria’s faunal emblem (which experts say faces extinction in the near future) has not been updated since 1995, despite the lost of almost half its habitat in the 2009 bushfires. In five of the past seven years, VicForests has made cash losses, which it has borrowed money to cover. So in fact, VicForests’ logging of native forests is losing them cash. The bill currently before Parliament moves us in the opposite direction from a bright future for Victoria by locking current and future generations of Victorians in to decades more of native forest logging. It is hard to the see any social, economic or environmental reasons why.