Wildlife 'pushed to the limit' by Australian population expansion and overdevelopment

An article by Kathy Lord, "Wildlife group 'pushed to the limit', in ABC News, typifies many mainstream press reports on kangaroos as it reports the phenomenon of kangaroos turning up in suburban and urban areas. This article entirely omits to criticise the cause, which is human overpopulation and expansion due to Australian and State goverments' undemocratic policy of inviting mass immigration from interstate and overseas. This needs to be exposed. The article, as stands, makes it look as if kangaroos are for some bizarre reason invading the city. This is grossly unfair and quite callous. The casual references to darting and euthanasia gloss over a completely avoidable problem that breaks the hearts of many Australians who just want the suburban expansion and its destruction of nature to stop. 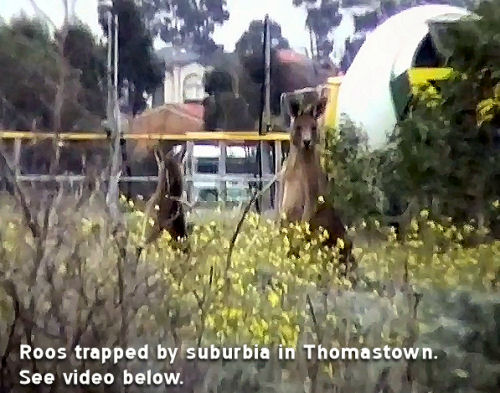 "Wildlife group 'pushed to the limit' by growing number of calls for help for kangaroos in residential areas," relates sympathetically how growing numbers of displaced and injured wildlife are overwhelming the capacity of wildlife rescuers and carers. But it fails to show sympathy for the kangaroos; treating them like some insensate mass of troublemakers. The 'problem' seems largely reduced to one of getting the government to help Wildlife Victoria 'dart' the kangaroos. It hints blandly at mass euthanasia. It does not say where 2000 and more kangaroos might be placed, once darted, in what is a chronic displacement problem caused by government policy.

"Wildlife Victoria chief executive officer Karen Masson said since December 2012, the number of calls for help has increased rapidly. A large mob of up to 2,000 kangaroos has been displaced from new suburbs in the Mernda, Doreen and Whittlesea areas north of Melbourne. The animals head into residential areas for lush green grass and that is when they get into trouble,"

Lord makes it sound as if the kangaroos have somewhere else to go and are choosing, through some kind of gourmet impulse, to invade suburban gardens.

"The problem has forced Wildlife Victoria into a corner. The group says it can no longer afford to dart kangaroos, leaving it up to the Department of Environment and Primary Industries (DEPI). Ms Masson said the department has agreed to take over, but its darters only work between 8:00am and 6:00pm Monday to Friday.
The ABC asked to speak to a DEPI spokesman about the problem but the department only offered a brief statement.
"The Department of Environment and Primary Industries recognises the challenges of kangaroos in growth areas north of Melbourne and is working with Wildlife Victoria on the matter," the statement said.

#D02B55;font-size:80%;line-height:120%;">Note: you may have to view the video below on YouTube at https://www.youtube.com/watch?v=MVxjHnSxP1k. When the start button of the embedded video below is pressed, the following message may be displayed: "Playback on other web-sites has been disabled by the owner" - Ed

This video was made in 2006 about a group of kangaroos marooned in Thomastown, which people tried to save. The situation has got even worse for kangaroos and that small clan is long paved over.

Journalists need to learn to present the situation more fairly

The author of "Wildlife pushed to the limit," and other journalists, need to learn to use more a balanced language and less biased terms when writing about kangaroos that are lost, isolated from their families and bewildered among crowds of humans and our noisy travel devices.

The kangaroo found near Sydney Road Coburg, (mentioned in the article) like the others who found themselves trapped in the airport carpark and one in the terminal, do not intentionally and deliberately cause chaos for humans.

Many articles like this, however, make it appear as though kangaroos are somehow invading urban areas like some form of enemy aliens on the march to take over ‘our’ land, when in actual fact they were here long before humans.

We humans are the ones with ‘ballooning populations’ and ‘uncontrolled numbers’ (to use the words of the uninformed), who occupy their land.

To add to that, human overpopulation and our urban and industrial sprawl are invading wildlife habitat and squeezing kangaroos out into the open making them vulnerable to further dangers.

Yet journalists continue to vilify these displaced roos with terms like ‘the kangaroo problem', ‘pests’ or ‘causing chaos’. These journalists neglect to inform the public of the real problems involved, especially the human problem.

Those who get to publish their own versions of kangaroo stories in major media outlets with wide coverage aren't getting the message out about what is really happening.

Articles like the above-mentioned often misrepresent the real situation, depriving the kangaroos of sympathy and understanding for their plight. They also deprive the community of a platform for necessary political action.

If you’re a journalist please take into consideration all of the above natural and human threats to kangaroos the next time you have an article to write on the topic.