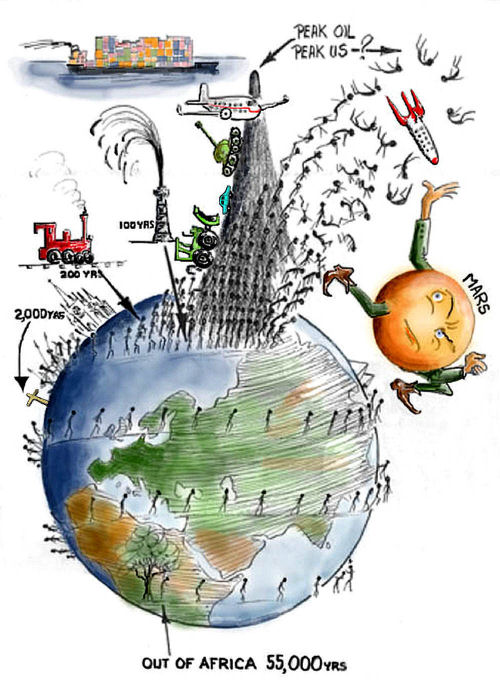 Permission to publish this eloquent and magnificently drawn cartoon gratefully acknowledged to the artist, Keith Nesbitt of Sustainable Population Australia, South Australia. The original drawing was done in black and white. Jill Quirk (President of SPA Victoria and Tasmanian Branch) coloured it electronically.

In 2007, the average person used 2.7 hectares. So we are in “ecological overshoot” a condition where we are extracting resources at a faster rate than the natural world can replace them.

We currently need 1.5 Earths to sustain our extraction of renewable resources each year and the estimates are that by 2030 we will need two Earths. Well, there aren't two Earths!

Instead of tackling the world's overpopulation crises, food security is being focused on, as a distraction from the real cause which is too sensitive to tackle! Researchers have turned their attention to mealworms. Mealworms are not worms but are the larvae of the “darkling” beetle (Tenebrio molitor). The impact of protein production on a mealworm farm compared very favourably to traditional animal farms raising chickens, pigs, and cattle (beef and dairy). Currently, more than two thirds of all agricultural land is used for animal production (whether housing the animals themselves or growing feed crops for them). This whole process—from fertilizing grain to raising cows to shipping milk—produces some 15 percent of all human-generated greenhouse gasses.

Many people appear shocked, even disgusted, when they are presented with the idea of eating mealworms. They’ve never considered eating insects. Mealworms taste just like roasted nuts or seeds. They’re particularly good covered in chocolate or sprinkled on soup!

Mealworms might be more familiar to pet owners as reptile, fish or bird food.
Mealworms live in areas surrounded by what they eat under rocks, and logs, in animal burrows and in stored grains. They clean up after plants and animals, and therefore can be found anywhere where "leftovers" occur. Most pet stores and many fish tackle shops sell small and large mealworms.

Most of the recipes include including the mealworms in breads, cookies. However, you can also consume them in the form of fry along with potatoes.

People will go to great extremes to avoid the human overpopulation issue. Promoting alternative foods buys time. There are enough vegetable based proteins available before resorting to worms!

Editor's comment: Another scientific breakthrough, which just possibly may save humankind from the stupidity, thus far, of its ruling elites, is synthetic biology. A video report of synthetic biology (of a duration of just over one hour), at https://www.youtube.com/watch?v=rD5uNAMbDaQ, is embedded in the story Introduction to Synthetic Biology of 5 Jan 2013 by Tony Cartalucci at http://landdestroyer.blogspot.com/. Even if its promises can be realised, synthetic biology can only hope to solve humankind's problems if we stabilise our population.

Moon travel is the next option

I was just reading about Naveen Jain's ideas to get to space in private expeditions. Mars may be a bit far fetched but I don't think that the moon is. let's just hope fracking isn't the first thing that happens there.