Article originally published as "Resistance Growing to Ecologically Devastating Chinese Mining Invasion of Madang, Papua New Guinea" on rainforestportal.org o 1 Apr 10. What you can do: e-mail China Metallurgical Construction Corporation to let them know of your objection to their invasion of Madang. 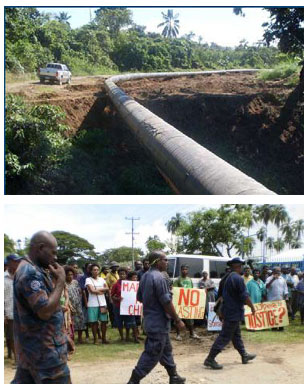 The Ramu mine's 134 km long pipeline which ultimately dumps
waste directly on the seabed is easily prone to damage from
landslides or sabotage. Local peoples are protesting the
potential damage to their land, seas and way of life. (link)

Chinese government owned China Metallurgical Construction (MCC) Corp. efforts to establish the massively destructive Ramu Nickel mine in Madang Province, Papua New Guinea -- the largest investment in metal exploration and mining by the Chinese outside of China -- is in serious jeopardy. Local landowners are initiating court cases and protests to demand the mine be stopped. The nearly completed Ramu project will mine nickel and cobalt ore at Kurumbukari -- which is located in the foothills of the Bismarck Ranges approximately 75km south west of the provincial capital of Madang. Topsoil will be scraped off a mountainous area and then the nickel-bearing soil will be mixed with water and the slurry sent down a 135 km pipeline through heavy rainforests to an ore refinery and treatment plant at pristine Basamuk Bay on the Bismarck Sea.  The ore will then be shipped to China, and the waste -- some 100 million tons over 20 years-- dumped directly into the sea.

The Ramu Mine's waste tailings will poison fish stocks and cause extreme ecological destruction of the seabed. Although the mining company describes the tailings disposal as "deep sea", tailings will be dumped at a depth of only 150 metres. Tailings will not be covered or otherwise secured -- rather they will simply be pumped out of the end of a pipeline and allowed to spread freely through spectacular Astrolabe Bay. Almost certainly the tailings will not remain where they are placed, and will spread widely in one of the last intact tuna fisheries globally. With work on the overland pipeline completed, the Chinese are now planning a series of underwater explosions to blast a way through coral reefs for the undersea section of the pipe.

Despite competing and still unresolved communal land right claims, the Kurumbukari people at the mine site have been devastated by their forced removal from their ancestral lands by police operating on behalf of MCC. People all along the project are extremely anxious about the ecological and social impact of the mine in their area, and the blatant corruption. They worry the mine will devastate the Ramu river, that the shoddy pipeline will leak - devastating rainforests and communities, and that the seabed tailings disposal will destroy their abundant marine resources. Local peoples feel impotent in the face of the ruthless indifference of the Chinese to PNG law, and the corruption of the national and local politicians who are lining their own pockets at the expense of Madang landowners.

MCC - managed by the local subsidiary Ramu Nico - was about to start blasting coral reefs to allow the laying of the tailings pipeline, when a court decision last week - on a case brought by local landowners - granted a temporary injunction stopping pipeline construction and work on the mine's seabed tailings disposal system. During court proceedings hundreds of landowners and local people protested peacefully outside the court house by holding placards showing their dismay, and were not intimidated by a heavy police presence. Representative signs read "Madang not China". "No Blasting, No dumping", and "Where is Justice?". Many countries have banned the dumping of mine waste in the sea, but Wari Iamo -- the deeply corrupted Secretary of the Department of Environment and Conservation -- has deemed it okay in Papua New Guinea.  MCC is to return to court in Madang on April 12.

The entire project has been mismanaged, marked by shoddy construction; and disregard for local rights, life, and marine and rainforest ecology. Recently a devastating fire at the mine site caused the destruction of the kitchen as plastic pipes that were used to feed diesel fuel to the kitchen melted. Sexually transmitted diseases are rampant as Chinese workers have forced prostitution and even rape upon local women. Construction work has already destroyed local drinking water supplies. Lack of drainage and retaining walls along the shoddy pipeline have already caused large landslips and blockage of the only highway into the province. The pipeline is extremely vulnerable to sabotage by disgruntled local peoples.

Papua New Guinea is not a brutal communist dictatorship, but a liberal democracy where free speech and human rights are respected and enshrined constitutionally. China's rising influence in PNG threatens the country's freedom of religion, speech and land rights. The mine was conceived in the capital Port Moresby and is being forced upon local peoples without prior and informed consent. It has been alleged in local media that MCC recently provided USD 10 million to the government of Michael Somare to defend itself against a vote of no confidence, and additional huge bribes have routinely been made previously throughout the approval and construction processes. A leading Papua New Guinea geologist says the Ramu Nickel mine has been massively undervalued -- that it was sold to the Chinese for just 5% of its true value, and is worth $US34 billion and not $US1.7 billion This is another example of the "broad daylight rape" and exploitation of Papua New Guinea's resources -- already evident in Madang with grossly inappropriate foreign owned, industrial tuna and timber projects. Chinese mining investment in Madang against local wishes can only be described as an invasion of sovereign peoples, and will be resisted at all costs.

What you can do: e-mail China Metallurgical Construction Corporation to let them know of your objection to their invasion of Madang.