The unspeakable cruelty inflicted upon pigs by factory farming

Pigs are intelligent animals that have strong bonds with each other. They endure miserable lives to make pork and bacon products cheaper.

Unfortunately Codes of Practice little to provide animal welfare for pigs. They have little maternal attention and are weaned early. Not only are intensive farms places of animal slavery and cruelty, but of land, water and air pollution. The screams of pigs can be heard in Castlemaine when they are slaughtered - workers use ear muffs. They know their fate and can smell Death! Making pork and ham "more affordable" means that pigs do not get many concessions. If people paid fully for organic and free-range meat less livestock would be eaten and it is livestock that contribute to much of our greenhouse gases and water wastage in Australia. 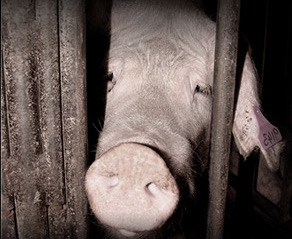 These intelligent animals don't get a chance to make many decisions in life, or have many choices. Their short lives are full of pain, from mutilations without pain relief, and constant deprivations. They are known to turn cannibalistic and eat each others' tails due to the sheer misery and stress in their short lives. Thus their tails are removed!

Pigs are really active and inquisitive animals. They need plenty of room. Those raised in factory-conditions, in concentration-camp conditions, suffer horrendously from deprivation and activity. Pregnant sows are pinned into sow-stall for up to 16 weeks without being able to move or lie down - all allowed by the Codes of Practice. These comic and intelligent animals are so ridiculed and abused by humans who only see them as a food source. Pigs are thought to be as least as intelligent as a 3 year old child, and can learn to play video games! If you love animals, avoid eating them!

What you can do: Help pay for a radio advertising campaign against this cruelty by visiting www.animalsaustralia.org/lucy_speaks.

Thank you so much for writing this Vivienne. This is so much a consequence of industrialisation, big populations and being distanced from farming and other means of getting food. Humans need to try to make our social systems more localised so that we can have more power over the way that food is produced or produce our own, and so that we can choose whether to avoid these intolerable cruelties. Government standards at the moment are no standards at all. They are absence of standards and presence of unspeakable cruelty. Cruelty has been industrialised and our societies are depraved by it. Sheila Newman, population sociologist home page Copyright to the author. Please contact sheila [AT] candobetter org or the editor if you wish to make substantial reproduction or republish.

There is no excuse for the application of wilful cruelty to any living creature.

In Australia, hundreds of thousands of "farmed" animals live short lives of abject, wretched suffering and misery. Pigs are known to have the intelligence of a three year old child, and to be more intelligent than dogs, yet up to 380,000 of these sensitive creatures are forced to live most of their lives and steel and metal crates barely larger than their bodies. They cannot turn around, and the "lucky" ones may be able to take one step back or forward. Their only experience of fresh air and sunshine will be when they are loaded on to trucks, bodies worn out, for slaughter. In their few short years, they have been impregnated until their bodies can take no more, they will have developed sores and ulcers, and painful muscle and bone deformities through their intensive confinement. They will have been forced-fed antibiotics just so that they can survive in the filthy environments in which they are forced to live. Decades ago, the Brambell Committee of the UK Farm Animal Welfare Council identified the "Five Freedoms" - the absolute minimum rights that all animals should have:- 1. Freedom from Hunger and Thirst - by ready access to fresh water and a diet to maintain full health and vigour. 2 Freedom from Discomfort - by providing an appropriate environment including shelter and a comfortable resting area. 3 Freedom from Pain, Injury or Disease - by prevention or rapid diagnosis and treatment. 4 Freedom to Express Normal Behaviour - by providing sufficient space, proper facilities and company of the animal's own kind. 5 Freedom from Fear and Distress - by ensuring conditions and treatment which avoid mental suffering”. And Australia has the highest standards of animal welfare in the world? Think intensive pig farming, meat chickens and battery hens, and think again. It is YOUR consumer dollar that will make a difference to the appalling lives (and deaths) of these wretched animals.

Why captive pigs kill their young

Recently I received a response from a Victorian politician to a submission I made about a new code for pregnant sows. My submission had asked for more humane conditions. The politician replied in a manner which I found myself unable to answer. His reply was that he would vote for more humane conditions, but that he thought few other politicians were going to. He stressed that he wasn't going to vote for less cruel conditions on the grounds that pigs had rights; he was going to vote for them because, since, in his view, we are a wealthy society, we can afford to be kinder to domestic animals and that it would be the decent thing to do. He then added that pigs were not very nice animals and often ate their young. I was aghast and confused. On the one hand, for me, the idea that other creatures have no rights, is pitiful and illogical. It is clear, however, that more and more people share this mean belief. They are mis-educated in this way by commercial and religious forces which have something to gain by inculcating ignorance and a tolerance for cruelty. On the other hand, this was the only politician I heard from who, in the belief (shared my most politicians) that the country was doing well, was prepared to give something back to those creatures who live and die without choice and only for our benefit. This politician's response was therefore more worthy than his colleagues'. However, the question of pigs eating their young was the worst part of the politician's answer. Why? Because it was so unbearably callous and unthinking. Do wild pigs eat their young? They are not known for this. So, how come domestic pigs are known for this? Well, consider the picture that accompanies Vivienne's article. If you were raised from childhood in suffering by people who despised you so much that they kept you in darkness, fed you shit, gave you no room, kept you filthy, never spoke kindly to you, treated you roughly and then marched you off to slaughter so that they could eat you, would you want your child to live? Either you would be so filled with learned self-loathing that you would destroy your child out of loathing, or you might, if some part of your spirit survived, destroy your child out of love. We don't give pigs any choice at all. Nor do we give the 'consumers' any choice, when we have governments which will, with a stroke of a pen, condemn to endless torment generations of animals, simply to save a few cents and win some votes. I guess you could expect the same kind of person who believes that industrial man is some kind of progressive evolution to also not question the received 'wisdom' that pigs are not very nice animals because they eat their young. I am afraid that the way we act in Australia towards other creatures means that we are not very nice animals ourselves. Sheila Newman, population sociologist home page Copyright to the author. Please contact sheila [AT] candobetter org or the editor if you wish to make substantial reproduction or republish.

First by studying and

First by studying and comprehending the theosophical doctrines, so that they may teach others, especially the young people. Secondly, by taking every opportunity of talking to others and explaining to them what Theosophy is, and what it is not; by removing misconceptions and spreading an interest in the subject. Thirdly, by assisting in circulating our literature, by buying books when they have the means, by lending and giving them and by inducing their friends to do so. Fourthly, by defending the Society from the unjust aspersions cast upon it, by every legitimate device in their power. Fifth, and most important of all, by the example of their own lives.

Stop the misuse of antibiotics on factory farms

The Federal Agriculture Minister Barnaby Joyce has described animal activists who break into farms to gather footage as 'vigilantes' to be prosecuted under the threat of new "ag-gag" laws. National bacon week has also been a platform for the launch of new animal rights group called Aussie Farms . National Bacon Week, to promote the factory farming of pigs, is being counteracted by animal activists, Aussie Farms, who will publish film of animal cruelty every day during the week. Australian Pork Limited recently launched an education program that teaches primary school children about where pork comes from and how it's produced. Barnaby Joyce raises the issue of "biosecurity risk" of intruders. The reality is that these animals are compromised by high levels of anti-biotics, not as a medical treatment, but as part of their lifestyles of living in high numbers, in congestion. It's un-natural and their immune systems have been compromised. The pork industry has already committed to phasing out sow stalls and about 60 per cent of producers are now sow-stall free. The footage in the first video published by Aussie Farms shows one sow with bleeding teats. In some operations, piglets have their teeth clipped to prevent them damaging the teats while drinking milk. Removal of the teeth can also prevent the young pigs injuring themselves while fighting or playing. We all know that rats confined in small places are more likely to be aggressive - and crowded pigs will also be more "aggressive"! Deni Piggery is a small (200 sow) farrow to finish pig farm in Deniliquin NSW, with industry-standard farrowing crates and sow stalls. The pig farm is filthy and cramped. One sow was found with a particularly bad rectal prolapse, another with a bleeding, untreated wound on her leg. In the sow stalls, sows were found lying in a thick build-up of their own faeces and urine. ABC: New animal rights group attempts to expose pig cruelty in Bacon Week www.facebook.com/AustralianPigFarming www.aussiepigs.com/piggeries/deni The Chairman of the Sydney Meat Market Michael Woodcroft says animal welfare incidents have a 'massive impact' on business. Animal welfare group Aussie Farms posted video of the abattoir in May showing a worker prodding a pig in the face before holding the electric goad in its ear for 12 seconds. Another pig was kicked and beaten in an effort to get it into a chamber for gassing. The public should know where their food comes from and about the animals that produce it. Animal Activists should wear the label of "vigilante" as a badge of honour!