The CSIRO recently released their Home Energy Saving Handbook – How to save energy, save money and reduce your carbon footprint. 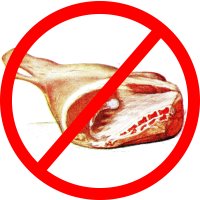 CSIRO Total Wellbeing Diet championed a high animal protein plan - lots of beef, lamb and dairy - which was perhaps not surprising, given that the research behind it was partly funded by the Meat and Livestock Industry and Dairy Australia.

According to John Vogels, the CSIRO should apologise to meat and livestock farmers for stating what is scientifically clear - that a move towards a plant-based diet is not only a way to limit greenhouse gas emissions and environmental destruction, but also a route to a healthier diet. "It seems tofu-munching climate change extremists and animal libbers have taken over the CSIRO, wasting taxpayer funds to publish books designed to wipe out our agriculture industries with the ultimate goal of forcing farmers off the land,'' Mr Vogels said.

The book grudgingly admits that although all that meat requires high greenhouse emissions, eating "high-carbohydrate, healthy heart and vegetarian diets…..is an easy way to lose weight and one way to adapt to a lower consumption diet".

In 2007 this MP
attacked Philip Wollen of the Winsome Constance Kindness Trust for telling the truth about the negative impacts of the dairy industry, even going so far as to question his Australian of the Year award. According to him, he could “afford" to be vegan? Surely the diet is actually cheaper?

Vogels says that the Home Energy Saving Handbook was "thinly veiled propaganda advocating Australians change to a vegetarian lifestyle in the name of reducing greenhouse gas emissions. If the populace took this book seriously our beef, sheepmeat, pork, poultry and dairy industries would be at risk because the authors want everyone to move to vegetable diets to reduce personal carbon footprints…” Exactly!

Somewhat contradictorily, Vogels is “pro-life" – against abortions. Apparently this does not include the lives of animals that routinely suffer mutilations, confinement and slaughter to feed our commercial meat and dairy demands. His “pro”-life stand does not include protecting our future generations from the devastation of climate change, or consumers from cancers and other diseases associated with high levels of meat and dairy consumption.

According to the book, the average person’s carbon footprint is about 20 tonnes of CO2 per year (not including emissions from our exported goods) and the biggest contribution to this figure comes from the food, goods and services we buy (about 60 per cent of the total).

The agricultural sector is estimated to account for about 16% of Australia’s total greenhouse emissions (National Greenhouse Gas Inventory 2006) making it the second largest source of greenhouse emissions in the economy. Most if it is from livestock emissions, and that doesn’t include transport, processing and cooking!

With health, the environmental burden, animal welfare and climate change concerns of eating livestock products, surely it is time our diets came under scrutiny from numerous levels? Being enslaved to traditions and tastes should be challenged.

The world demand for food and fibre will double within a single lifetime, eclipsing climate change as the world's next great challenge, experts told the National Agrifood conference in Sydney on 24 September.

Being constantly on top of the food chain is an extravagance in terms of natural resource usage, as well as pollution and methane emissions. Maybe it is time for our Government to actually promote alternative “green” plant-based foods to alleviate the demand for livestock products and transform our agricultural industries so that they become more carbon-neutral. The dinosaurs like Vogels need to be challenged!

A recent CSIRO/NASA report on rainfall in Australia’s southeast revealed that the prolonged drought there may no longer technically be a drought - lower rainfall levels may be the new normal.

Economic considerations always seem to over-ride logic and reasoning!
Science should be objective, and the CSIRO should not have been sponsored by industries with a conflict of interests. They do not have to apologise!

We constantly hear the use of the arguments of JOBS and ECONOMIC BENEFITS to justify environmental consumption!

Great article, Vivienne. Just wondering if you would like to be a part of an article for a local paper for World Vegan Day? You can contact me at rbm12[AT]live.com.au.