Surely these are the "inconvenient truths", livestock industries and population blow-out! 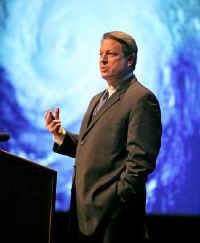 Al Gore has been involved in the business of raising Black Angus cattle for most of his life.

Not once during the 96 minute presentation, An Inconvenient Truth, did Al Gore mention livestock and our diets as a cause of global warming, or suggest any form of solution or alternatives. This omission would be similar to not mentioning cigarette smoking in a discussion of lung cancer!

According to a report, Livestock’s Long Shadow –Environmental Issues and Options, released in November of 2006 from the United Nations Food and Agriculture Organization, livestock emerges as one of the top two or three most significant contributors to every one of the most serious environmental problems. Additionally, animal agriculture is responsible for 18 percent of the world’s greenhouse gas emissions as measured in CO2 equivalents.

It's not just the well-known and frequently joked-about flatulence and manure of grass-chewing cattle that's the problem, according to a recent report by the Food and Agriculture Organization of the United Nations (FAO).
Livestock:

With a burgeoning world population, and rising middle classes in Asia, the demand for meat and dairy will continue to grow.

The loss of species is estimated to be running 50 to 500 times higher than background rates found in the fossil record, largely due to the land required by livestock.

Land-use changes, especially deforestation to expand pastures and to create arable land for feed crops, is a big part of the industry's damage. So is the use of energy to produce fertilizers, to run the slaughterhouses and meat-processing plants, and to pump water.

"Livestock are one of the most significant contributors to today's most serious environmental problems," Henning Steinfeld, senior author of the report, said when the FAO findings were released in November.

With a burgeoning world population, and rising middle classes in Asia, the demand for meat and dairy will continue to grow.

The twin "elephants in the room", livestock production and population growth, are avoided by Al Gore and by many environmental and climate change groups.

Surely these "inconvenient truths" need to be debated at Copenhagen if there are to be any realistic gains made?

Quite right Vivienne... Not only from the global warming perspective. The world has approximately 1.5 GHa of crop farmland. 1/3 is used for livestock feed and then some is used for biofuels and non-food crops. If we can feed 5 to 7.5 people on one hectare (not counting the animal-derived foods now) that's a world population of 5 to 7.5 billion. Since world population is now roughly 6.7 or 6.8 billion and we will likely reach 7.5 billion around 2020, we are either now in overshoot or will be in about 10 years' time, so it's time to start thinking about: 1) reducing livestock feed crop areas (reducing animal foods to what can be sustainably produced in other ways), 2) shifting to equitable distribution of food, 3) reducing world population growth to zero and then reducing the world population itself. While I'm about it, I'm adding a couple more inconvenient tasks, just to be a little more complete: 4) Halt deforestation and rehabilitate the forests, 5) Halt the destruction of farmland and rehabilitate the soil through 'organic' (permaculture, non-chemical, etc) soil husbandry techniques. This means the end of industrial agriculture and the industrialized food system (who needs it?). If all of humanity were really 'serious' about making meaningful inroads into GHG emissions, this is one large step we could take which would be beneficial for everyone (health, let's not even talk about making money by making others sick) and could be carried out in a way that would not even need to have very much of an effect on other aspects of our highly industrialized/materialistic lifestyles. However, if we were really 'serious' about reducing emissions of GHGs, wouldn't we be talking about major lifestyle change? I don't hear Al Gore and the other politician-experts ever mentioning that possibility. I wonder why not... Inconvenient tasks to go with the inconvenient truths. I saw a nice cartoon of a fat Al Gore munching a chicken leg. The caption was "Too chicken to go Vegetarian/Vegan?" Just about sums it up. Best wishes, Tony

Great one, Tony!
Here it is:

A Gore has finally conceded to methane as a greenhouse gas

Al Gore has finally conceded that CO2 is not the only atmospheric warmer. Gore now blames soot and methane for the majority of global warming, leaving the door open for a tax on livestock, a tax on meat and milk. There are 1.4 billion cows and pigs on the planet emitting methane, which is 25 times more effective than carbon dioxide at containing the planet's heat. Calculated by Food and Agricultural Organisation of the UN (FAO), livestock farming generates more greenhouse gas emissions worldwide than all cars, lorries, trains, boats and planes added together. Lord Stern, a British expert on global warming, says that if we really want to pull the planet back from the brink of utter destruction, we all need to stop eating meat. It puts enormous pressure on the world’s resources. With a burgeoning world population, and rising middle classes in Asia, the demand for meat and dairy will continue to grow. A Gore's crusades remain shallow until he includes the "inconvenient" truth of the need to reduce our livestock production and consumption, something that is much simpler to address than the technology and costs of alternative energy.