The Victorian Government is proposing a large development at the Port of Hastings. This will result in a six lane highway with a freight train line in the middle where the current Westernport Highway is. The development will have significant effects on Westernport Bay and the fish nurseries there.

Our processes for social decision-making are failing us. 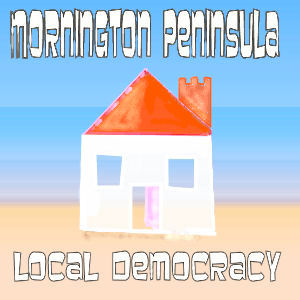 In modern Australia there is a “Widespread anxiety about the state of politics” and “the only appropriate response is cynicism” (MacKay 1993 pg 176). The problems are not just local but it is only locally that we can hope to make a difference.

A necessary part of the solution is increasing local control through a shift in the division of power. But to overcome cynicism it needs to be a genuine shift. In Australia we have learned a unique lesson in this regard. In 1900 the federal government was given specific powers with the intention of improving the material circumstances of everyone. These powers related to such sensible responsibilities as: taxation, postage and communication, banking, immigration, external affairs, pensions and matrimonial matters (Clark, 1987). The residual powers: education, health, railways remained with the states (Clark 1987, pg 188). But over 100 years we have seen state powers gradually usurped by federal government due to financial dependence. This dependence arose from a series of gradual changes in the both the size of federal revenues (from around 5% of GDP in the early 1900’s to 30% of GDP by the 1980’s) and proportion (until 1942 income taxes were collected by the states). The evidence of federal power over the states extends to current attempts to effectively take control of education curriculums through the Gonski reforms (I am not arguing whether that is a good or bad thing, I am just pointing out that power seems to lie with those who control the purse strings). As noted by Andrew and Goldsmith (1998) local government has also experienced “an increased use of appointed as distinct from elected bodies as well as increased state or central control of local government activities and finance”. In which case, legitimising local councils constitutionally and strengthening their authority (through referendum) is unlikely to empower citizens locally if those same councils are heavily dependent on federal or state funding (although some believe this could help). The issue of declining democratic representation as a result of appointed authorities is also significant.

One important concern to address is the perceived low level of competence of local leaders and councils. Let me put forward the idea that local leaders are probably no more or less competent than state or federal leaders, in many cases local leadership in councils is the pathway to parliament, with only an election in-between. Decision making at state and federal levels may seem more effective, but I suspect that this is because they have meaningful budgets and real decision making power, thus they are subject to heavy lobbying by various and conflicting organised groups. It is likely this lobbying more than anything else that leads to a higher, but still inadequate, level of informed and conciliatory decision making by state and federal representatives. A shift of power to the local level would presumably lead to a commensurate increase in lobbying and a corresponding increase in the quality of local decisions.

This does not imply that we need abandon the federal system, but rather that we return much power and money to more localised governments. It is only at the local level that the needs of community can be really understood and addressed. And this only if they have both the authority and resources to do so. Furthermore, without major planned reforms this will inevitably occur anyway – as our paralysed state and federal governments become less and less effective at managing our deteriorating circumstances. There is a failure of leadership at the existing state and federal levels. The only strategy they have is to continue development and growth – this will only make the problems worse. The end of the growth based system is now well in sight, and it is not pretty.

In short, we need to face up to the fact that society has changed substantially over the past 100 years, however, our legal and legislative system has not. It is failing and this is reflected in the evident cynicism and lack of confidence as noted above. Unlike the late 1800’s, Australia is now firmly integrated into a globalised trade and political system. So rather than directing our attention towards real or imagined forces that are beyond the ability of citizens and our current governments, to control we need to act locally to help ourselves. And in fact, we are already seeing this occur in many communities across the globe. (eg: local communities banning GMO’s, creating their own currencies and local defence). In case you doubt the ability of strong communities to deal with crises there is good evidence that they can survive even the most dire calamities, as was demonstrated by Cuba’s resilience when the USSR collapsed (for a summary see here). In fact, Cuba’s response demonstrated a case study for division of powers for emergencies: federal responsibility for health, education and food rationing and local responsibility for production and distribution. But Cubans apparently had faith and trust in their government. Is that true of Australians today?

However, there is an answer - communities can take back control. Through a process of local referendums communities can create a new system of regional governments. These governments can replace both state government and local government by combining two or three council areas into a new state. The newly created regional states can then join the Australian federation under the constitutional process for adding new states.

Creating the State of Mornington Peninsula would lead to immediate significant economic benefits through creation of local jobs and opportunities. Money and jobs that are currently sent to Melbourne would be re-located on the Peninsula as the State of Mornington Peninsula would have its own education department, state and road planning, transport department, courts and police force etc. The flow on effects of this would significantly boost local business and open up very attractive opportunities to the people of Mornington Peninsula State. It is expected that all state systems would be far more responsive to the needs of the people on the Peninsula than the current state services.
In fact, if this process was to conducted across Victoria it would achieve the decentralisation and revitalisation of rural communities that has been discussed and previously attempted by the Victorian State Government over recent decades (see this ABC report).

The conversion of the State of Victoria into a set of smaller regional states can be done via a state referendum. This could result in around 18-20 regional governments and in such a scenario, a coalition of Victorian Governments could supervise and manage the re-organisation of former State of Victoria assets, services and responsibilities.

Thus communities could decide for themselves whether to navigate an energy descent path earlier or later - i.e before or after potentially destroying their farm land and groundwater supplies by fracking.

However, the ability of communities to effectively organise themselves depends on the strength of those communities. Thus regardless of what happens, there is a practical and necessary action every one of us can take: that is to get involved in local community in some manner; whether it be volunteering, attending local meetings; whatever capacity suits you best. This will build social cohesion, and knowing the people in your local community better will certainly help you feel a lot more comfortable, especially in troubled times - which are imminent . We must act now.

Clark, M 1987 “A Short History of Australia”, Penguin.
MacKay, H 1993 “Reinventing Australia: the Mind and Mood of Australia in the 90s”, HarperCollins.

Tomorrow, Wednesday 13 November 2013, Boroondara Council is taking VCAT to the Supreme Court over a decision

It involved a heritage listed house in a heritage area, where apparently the heritage value was ignored and they approved it to be pulled down and to build a great big block of concrete and glass flats.

This will be a big test of the value of heritage and there might be some of you with time and interest to go and listen to the arguments.

The decision will have great importance to many.

The hearing will commence at 10.30am tomorrow morning in Court 12, Ground Floor, 210 William Street, Melbourne.