The article below, by Mary Jenkins secretary of the Spearwood Residents Association, who stood as an independent candidate in the recent state elections, appeared in the Cockburn Herald on or before 18 Nov 08.

The Cockburn Gazette, in its story, "Protestors Blasted" of 18 November, reported that 100 people with placards had protested at the council meeting and police had been called in to control the residents. The Mayor of Cockburn, Stephen Lee, is now on extended leave after the Crime Commission had found him guilty of misconduct for having accepted an undeclared election campaign donation of AU$43,000 from the Singapore-controlled developer Australand, which wanted to build the controversial Port Coogee Marina.

This article, by Mary Jenkins secretary of the Spearwood Residents Association, who stood as an independent candidate in the recent state elections, appeared in recently in a Western Australian newspaper.

I was secretary of the West Ward community Association in 1985. I always had good relationships with three mayors and the Commissioners who ran council in 1999. Things changed when Stephen Lee became mayor especially since his second term when he began to silence anyone who asked question he did not want to answer.

What infuriated people that attended council meetings in the last few years were how the public were treated with contempt and their questions dismissed. Who is to say that a different council would have done things much better and at considerably less cost to ratepayers? The complete cost has not yet been realised!

How many council general meetings have the people who gave unquestionably support to the mayor, attended? Anyone who attends council meetings regularly, because they are interested in community affairs and process, will be aware of the rapid decline. Councillors could have halted the decline if they had requested further question time at any meeting. They did not once over-rule mayor Lee. Hence the community reaction and threatened with $1,000 fine if they spoke up for further time to ask questions or demanded answers to new planning developments, is to be expected from a vibrant community.

As secretary of the Spearwood Community Association and a member of Concerned Citizens for Good Governance I would like to make it clear that the administration of our council is not the issue of conflict. The administrators are professional people doing a good job under difficult circumstances. They have always listened to and attended our Association meetings, unlike our ward councillors today.

Many of the people who object to the mayor and councillors process have lived in Cockburn for over 60 years. Some have also been councillors themselves and have never experienced what is happening today! Three of our X mayors are also disturbed at the present state of Cockburn Council.

In fact this is having economic consequences both inside and outside Cockburn. Cockburn is no longer considered a property positive place to live in the future according to the Real Estate editor of the Sunday Times (2 Nov 08). Cockburn did not even get a mention. Seems once again the investment and drive is North of the river! So is the transport system!

Could this be because Cockburn has always been a safe union faction ALP seat? Our local member Fran Logan has never lived in Cockburn. In fact the last two state ALP union faction members - Norm Marlbourgh and Bill Thomas - never lived here either! Not one of them ever spoke up for a good coastal train service that would develop Cockburn as a tourist place. Instead industry has been given a free hand to pollute the air we breathe. It is only since the community lobbied for deep sewerage that it is happening at last. Our ALP member and present council ignored this until a State election was imminent this year.

Spearwood Association endorsed the petition to the Minister and rejected Stephen Lee's 3 months leave on full pay at their October meeting. Who is to say 3 month will resolve Lee's problem, hardly likely given McCusker is about to resign and it took Julian Grill a year? What then? Another 3 months in January when there is no general council meeting? How long will this go on for we ask the Minister?

Many of the protesters are people who take an interest in local affairs and planning. They like living in Cockburn. They hope one day Cockburn will return to a democratic council where the community voice is listened to. The alternative is for WEST Ward to become part of Fremantle. Then a proper coastal development can take place without the conflict that exists today between both Fremantle and Cockburn councils. Traffic problems will not be ignored through the region, cycle ways and pedestrian paths will be restored on the coast as part of Fremantle tourism.

Whatever the future holds things will need to change from the present situation. The next council general meeting is on November 13th. Can we expect police on horseback, security with dogs and ten police and plain-clothes detectives present? Is this the way to run a local council meeting where most protesters are over 50, some as old at 80, and just doing what is their right in a democratic country? Come along and support people power.

The Cockburn Herald of Saturday 22 November reported in its story "Councillors legal threat against rowdy ratepayers": 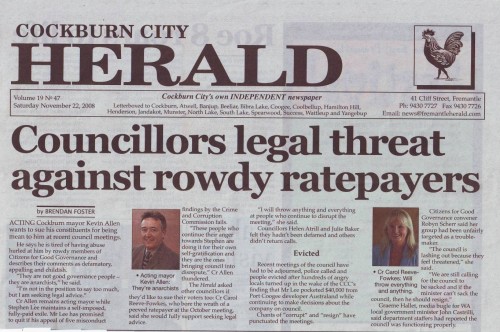 "Acting Cockburn Mayor Kevin Allen wants to sue his constituents for being mean to him at recent council meetings.

"He says he is tired of having abuse hurled at him by rowdy members of Citizens for Good Governance and describes their comments as defamatory, appalling and childish.

"'They are not good people -- they are anarchists,' he said."

Councillor Allen said that he was seeking legal advice.

Councillor is acting Mayor whilst Mayor Stephen Lee is on fully paid leave whilst appealing against five counts of misconduct by the Crime and Corruption Commission for having accepted an undeclared AU$43,000 donation from Australand during the last Council election campaign.

Another Councillor Carol Reeves-Folkes said that she would also be seeking legal advice. She stated that she "will throw everything and everything at people who continue to disrupt the meeting," whilst Helen Atrill and Julie Baker felt that they hadn't been defamed and other councillors did not return calls.

"'The Council is lashing out because they feel threatened,' she said.

"'We are still calling for the council to be sacked and if the minister can't sack the council, then he should resign.'"

The following is the full text from the advertisement which appeared in the Cockburn City Herald of 18 Nov 08 together with some of the scanned image.

The community wanted Council to demand Mayor Stephen Lee to resign. They should have stripped the "Misconduct Mayor" of his exorbitant pay! But without debate, councillors quickly voted to use our money to give Mr Lee a paid holiday! By acting as a team in support of the disgraced Mayor they've condemned themselves as well. 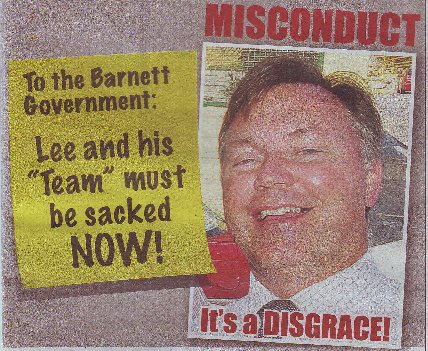 WE NEED
YOUR HELP
TO TAKE BACK CONTROL
OF YOUR COUNCIL