The Plague by Albert Camus and Lockdown in Victoria, Australia

During Victoria's lockdown(s), I re-read The Plague, by Albert Camus, which was a prescribed text for me and other Higher School Certificate students (Year 12) way back in 1972. The plot concerns the Algerian town of Oran, which is struck down by bubonic plague in the 1940s. The townsfolk are sealed off and isolated from the outside world, as the plague exacts an increasingly terrible and deadly toll. The book depicts their different reactions to their situation. It has immense power in getting to the heart of what things, and what values, are important in life. 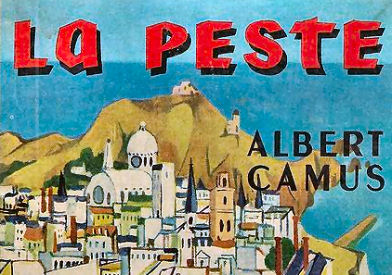 The plague in Oran, and the coronavirus pandemic in Australia, have some clear differences. While the people of Oran are cut off from the world, they are not cut off from each other. They mix at restaurants and cafes and the like. Social distancing doesn’t play any noticeable role – whether this was wise from a health perspective is not spelt out.

Another noticeable difference is that the initial reaction of the townsfolk is largely selfish. It is over time that many of them come to the realization that “we are all in this together”, and join the efforts of the medical team to help those who have been infected. By comparison I feel that the initial response of Australians in 2020 to coronavirus was a “Team Australia” approach, but that as the pandemic has worn on that people have tended to become fatigued and less concerned about the welfare of others.

These differences notwithstanding, I think the book rings many bells for our present situation. Camus says the townsfolk initially believed the pestilence wasn’t real, or that it would soon pass. “A pestilence isn’t a thing made to man’s measure, therefore we tell ourselves that pestilence is a mere bogey of the mind, a bad dream that will pass away. But it doesn’t always pass away and, from one bad dream to another, it is men who pass away…”

Camus also says that the town’s leaders and officials were slow to take the plague seriously. He says they had good intentions: “That, in fact, was what struck one most – the excellence of their intentions. But as regards plague their competence was practically nil”. And the epidemic spells the ruin of Oran’s tourist trade.

Then the plague produces a new variant, moving from bubonic to pneumonic. The officials are left “groping, more or less, in the dark”. Camus observes that “Officialdom can never cope with something really catastrophic”. This realization prompts one of the book’s key characters to organize voluntary groups of helpers to help the sick.

Camus also discusses the fatalism in Oran at the time, which is echoed today in the regularly heard observation that “we are going to have to learn to live with COVID”. He wrote “Many fledgling moralists in those days were going about our town proclaiming that there was nothing to be done about it and we should bow to the inevitable”.

But he rejects that fatalism. He goes on to say “And Tarrou, Rieux and their friends might give one answer or another, but its conclusion was always the same, their certitude that a fight must be put up, in this way or that, and there must be no bowing down. The essential thing was to save the greatest possible number of persons from dying”.

Indeed. It is an issue of fundamental humanity. In the last year and a half most people I have talked to have overwhelmingly supported community action to save every possible life. They have not displayed any sympathy for the Darwinian “survival of the fittest” approach. I have been impressed by their basic humanity and concern for those around them.

The Plague is worth a read. It is not an easy book, but then we don’t live in easy times.