Seemingly, as a pychologically understandable response to the smearing of Russia by the corporate presstitute media, and now US President Donald Trump, many otherwise well-informed and insightful alternative journalists, who oppose the corporate newsmedia, find it necessary to defend the conduct of the dictator Josef Stalin (1878-1953) with spurious rationalisations.

An example is Tell Trump the Soviet Union didn’t invade Poland in September 1939 by the Saker.

The argument put by the Saker is: 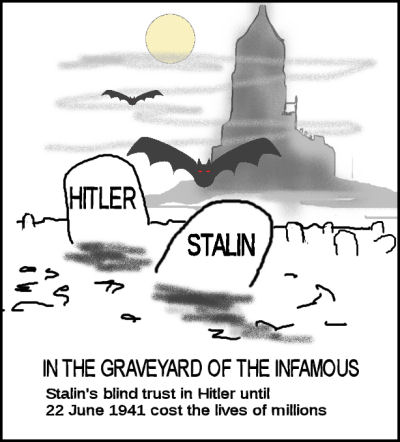 In fact, the Polish army and air force fiercely resisted the Nazi invaders. The army and the residents of Warsaw held out until 29 September.

Had the Red Army not invaded 12 days earlier than the surrender of Warsaw, and had France and Britain ended their 'phony war' and launched a real military campaign against Germany, can we presume that Poland might not have been able to triumph against the invaders? At the very least, had Russia not invaded from the East, the price paid by Nazi Germany would have been so high as to greatly reduce Nazi Germany's prospects of winning the subsequent Battle of France in 1940.

The following has been adapted from a post in response to Tell Trump the Soviet Union didn't invade Poland in September 1939 (788/2017) | The Vineyard of the saker.

The Saker rightly objects to the criminal actions by the Polish government and its NATO allies on the world stage right now in 2017. However, humanity's fight against the Washington warmongers and their Eastern European vassals, is not helped by the Saker's apparent whitewashing of the cynical conduct by Soviet dictator Josef Stalin in the early years of the Second World War. Whilst what the Saker writes of Neville Chamberlain, Edouard Daladier, is true, their betrayal of Czechoslovakia in September 1939 is dwarfed by the effect of the subsequent Molotov-Ribbentrop Pact.

After the signing of that pact, the Soviet Union effectively became an ally of Nazi Germany. As Nazi Germany conquered Poland, with the help of the Soviet Union, Denmark, Norway, the Netherlands, Luxembourg, Belgium and France, then tried to subdue Britain with aerial bombardment and U-boats, and then prepared to invade the soviet Union, the German war economy was supplied with raw materials from the Soviet Union.

Whilst what the Saker writes about the treachery of the Polish Pilsudski government and most of the Western democracies prior to 1 September 1939 is true, this cannot excuse the even more cynical conduct of Stalin after the signing of the Molotov-Ribbentrop Pact on 23 August 1939 and his subsequent blind trust in Hitler right up to the launch of Operation Barbarossa on 22 June 1941.

This also ignores the fact that Britain under Churchill[1], tacitly supported by America under President Roosevelt (FDR), [2] continued to fight Nazi Germany. FDR's support of Britain and the Soviet Union was contrary to the wishes of many of America's wealthy elite.

Stalin's trust in Hitler was so blind that he even ignored warnings by German Communist Richard Sorge[3] (1985-1944), who worked at the German embassy in Tokyo, at least one defecting German soldier (who was shot for his trouble), and by American intelligence, that Nazi Germany was preparing an invasion.

Had Stalin heeded these warnings, then surely the scale of the Red army's military disaster prior to the battle of Moscow in 1941 could have been considerably mitigated.

Instead, Stalin refused to pass on the warnings to Red Army commanders whilst the Soviet Union continued to send, by rail across the border, much of the raw materials, needed by Nazi Germany to both continue its war against Britain and for the coming invasion of the Soviet Union. Raw materials were sent right up until the morning of 22 June 1941.

Unfortunately, the vast tragedy did not end at Moscow in December 1941. Before Nazi Germany was finally vanquished in May 1945, 25 million Soviet citizens, by one rough estimate, were to lose their lives.[4]

By his treachery and misjudgement, Stalin, more than any other individual in history, made possible the triumph of Hitler's Third Reich. Only the terrible sacrifice of tens of millions of people people, including the 25 million lost by the Soviet Union, prevented that.

[1] Churchill is a paradoxical figure. In October 1944, in contrast to his legendary defiance of Nazi Germany during the 1940 Battle of Britain, he cynically betrayed (with Stalin's collusion) the Greek ELAS fighters who had heroically resisted Nazi Germany. They were tricked into disarming, whilst Greeks, who had collaborated with the German occupiers, were rearmed. (See the Greek Civil War, The Kapetanios (1973) by Dominique Eudes.)

[2] Most of America, including the wealthy elites, opposed the entry of the United States into the Second World War on the side of Britain and the Soviet Union. Many of the wealthy elites opposed war because many were sympathetic to Nazi Germany. On the other hand, ordinary American workers were rightly angry about the loss of 117,465 lives in the pointless First World War. However, FDR understood that, unlike the case in the First World War, humanity had a real stake in the outcome of the Second World War.

To overcome public opposition to war, FDR and some of his top military contrived to provoke Japan into launching a 'surprise' attack on Pearl Harbour. This is described in Day Of Deceit: The Truth About FDR and Pearl Harbor (1999) by Robert Stinnett.

This would be one of very few instances, if not the only instance, in history, where humanity had a stake in a political leader successfully pulling off such a Machaevellian stunt. Had FDR not been able to bring America into the war, the Soviet Union would most likely have lost and its vast stock of natural resources would have been made available to the Nazi German war machine. Nazi Germany and its vassal states would then have been able to rule over a unipolar world.

[3] Any year 8 student of German would know that 'Sorge' is (roughly) pronounced 'sorga' and not 'sorj', as I originally thought.

[4] I personally doubt that a country, even as large as the Soviet Union, could have continued to resist Nazi Germany if even more lives had been lost. In comparison, between December 1941 and August 1945, the United States lost 419,400 lives fighting Nazi Germany, Fascist Italy and the Japanese Empire. Whilst that is a terrible loss of life, it is still an order of magnitude less than 25 million lost by the Soviet Union.

last night, I attended a cinema screening of the Death of Stalin and found it captivating as did the clear majority of audience reviewers on Rotten Tomatoes: https://www.rottentomatoes.com/m/the_death_of_stalin/reviews/?type=userhttps://www.rottentomatoes.com/m/the_death_of_stalin/reviews/?page=2&type=user ... https://www.rottentomatoes.com/m/the_death_of_stalin/reviews/?page=15&type=user "The Death of Stalin" will not be at cinemas in Melbourne after today (3:45pm at the Palace Cinema at Brighton and 7:15pm at the Mornington Cinema). After then you will hve to wait for the DVD to be released. Whilst the "The Death of Stalin" was promoted as a comedy, I don't recall ever having laughed, even if some very clever theatrical devices were used. It seemed to me to be a plausible account of the end of Stalin's life and the subsequent power struggle amongst senior political figures of the Soviet Union. This account is contrary my own past understanding of those events. According to my own understanding, Nikita Khruschev was the great reformer who overturned Stalin's dictatorial police state, whilst Lavrenti Beria, the head of the KGB secret police terror apparatus must surely have acted to prevent that reform. Yet, surprisingly, it is Beria who tried to end the terror and repression after Stalin's death, whilst Khruschev tried to preserve dictatorial rule. As Beria put it, he carried out the terror to suit all the political leaders before him, but now could see that terror was no longer appropriate, if it ever was. Whatever the truth of this, Lavrenti Beria, as head of the KGB, oversaw the deaths possibly as many as 1.2 million people (https://en.wikipedia.org/wiki/Great_Purge#Number_of_people_executed) during the Great Purge which began in 1938. It is hard to see how Beria would not have eventually been held to account for all these deaths had his proposal to end the terror as depicted in this film been accepted and had he prevailed in his conflict with other members of the politbureau. Towards the end, Beria is arrested and almost immediately executed, without any due process, by Red Army soldiers under the command of General Zhukov. In reality, Beria was arrrested on 26 June, then tried nearly six months later on 23 December 1953 and sentenced to death and executed the same day with no defense counsel and no right of appeal (https://en.wikipedia.org/wiki/Lavrentiy_Beria#Arrest,_trial_and_execution). He was given little more due process in reality, than in the film. The fact that due process was denied to Lavrenti Beria is reason to believe that Khruschev may have had something to hide. Curiously, Russia, which has provided informative global news services, incuding https://rt.com and https://sputniknews.com, to counter the disinformation peddled by the corporate newsmedia, has refused to allow "The Death of Stalin" to be shown in Russia. How denying Russians access to movies critical of aspects of Russia's past will benifit them is unclear. Certainly it won't help lift Russia's image in the international arena.