After a long period of convalescence subsequent to a brain injury, James Sinnamon describes his attempts to reconnect to his old life and to his old friends, the possums in Red Hill, Brisbane. His earlier interactions with the possums are recorded here by Gloria O'Possum.

Three and a half years ago, on 18 May 2010, I was cycling to work my afternoon shift as a hospital cleaner at the Royal Brisbane and Women's Hospital 3 kilometres north of the Brisbane CBD. (How I went from computer scientist to hospital cleaner is another story which you can read here.) At the entrance to a sports field, I was almost killed when a 4-wheel-drive ran into me.

I have no recollection of the accident itself. I only recall the cycle ride up to a few seconds before it. As a result of my head's impact with the 4-wheel-drive, I was knocked unconscious. Whilst, in general I am opposed to laws which compel every cyclist to wear a helmet, almost certainly, my bicycle helmet saved my life on that day. Still, I was seriously injured and suffered diffuse axonal brain damage. 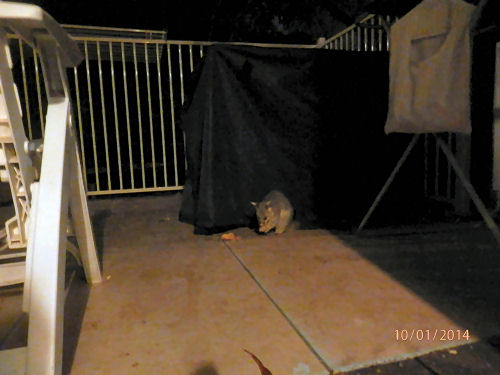 As a result of this damage my ability to recall events has suffered. My father, Ian Sinnamon, tells me that, not long before my injury, I witnessed a python devouring a poor little possum (like those in the included images) beneath his house. I would have thought that is the sort of experience that very few people would forget., yet I have absolutely no recollection of the incident. Many other memories of my past life have also been lost. Whilst some have returned to me in the past three and a half years, I fear many others will not.

Most fortunately, I was not disfigured and, friends tell me, I have not lost my intellect. Most people who meet me in the street would not know that I am disabled.

As a result of my diffuse axonal brain damage, I am less coordinated and have less physical balance than before. My mental stamina has been reduced. The brain injury initially left me hemiplegic. I had to relearn how to walk, and the long-term effect has diminished my physical stamina and physical strength.

Three and a half years later, I have recovered to some degree, thanks to the care and support given to me by family and friends and most of all, Sheila Newman, my principle collaborator on candobetter since 2006.

I have spent much of the time since my injury in Victoria undergoing various kinds of rehabilitation. I spent nine months as a day patient at VicRehab's Glen Waverley premises. Sheila Newman, her parents, other friends, doctors, psychologists and other health professionals have also helped my recovery.

Various friends and acquaintances have lived in my Brisbane premises in the intervening period as house-minders and tenants. Sadly, not all have liked the local possums as much as I did.

Sheila and I are currently visiting my Brisbane premises. Whilst our present tenant is not hostile to the possums and has been feeding them carrots, he does not feel quite as much love for them as I do. Over the past 4 days I have tried to rebuild my relationships with the possums by leaving them pieces of banana, mango (donated by a local resident from his mango tree), and even the occasional piece of cake. Below are photos of my encounter with the possums last night. As I type this at 8:21PM (+10:00) on 11 January 2014, at least one of the possums is devouring pieces of banana on the balcony outside the door behind me. 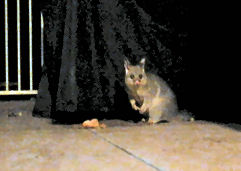