Will there ever be a real debate on sustainability?

Most objections to Australian Prime Minister Julia Gillard's Carbon Tax are founded on the apparent belief that it is possible for human society to continue its wasteful consumption of non-renewable natural resources and destruction of our natural environment without posing any risk to the life support system which exists in this tiny corner of a Universe, mostly barren of life.

However, compared to what can be done and what must be done if human civilisation is to hope to further endure for a period which even remotely approaches the 32,000 years since our ancestors left evidence of intelligence probably equaling our own in the in the Chauvet-Pont-d'Arc Cave of the Ardèche department of southern France, the proposed Carbon Tax is a joke in extremely poor taste.. 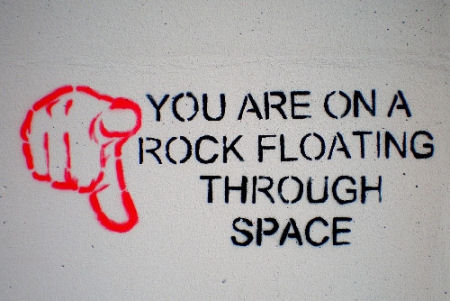 At best, the Carbon Tax is token gesture by Government and its corporate masters to be acting to protect our future. At worst, it is another paper economy scam that will allow wealth to be gouged from the rest of us by unproductive members of society whilst weighing us down with yet more more red tape.

This article was adapted from a #comment-159465">comment I made in response to A long time coming … an article by Professor John Quiggin written on 13 October. It has yet to draw a response there. If any visitors to candobetter.net decide that this article is more worthy of a response than visitors to johnquiggin.com have so far indicated, comments, whether critical or supportive, are most welcome.

I have sympathy with very few of those who are so stridently denouncing Julia Gillard's Carbon Tax.

True, the way she went about introducing it is questionable from the standpoint of democratic principles, but those who are against the Carbon Tax seem to want us to believe that Earth is not facing an environmental crisis which could well threaten threaten the life support system that sustains human life.

Without getting into the scientific argument, when the conditions which support life are so rare in the Universe and those which support the sort of complex life forms which exist on Earth are rarer still, it defies common sense to think we can materially change our planet as much as we have done in the last three centuries and continue to do so at an an even faster rate without putting at risk the very conditions which sustain life.

We have substantially altered the concentration of the Earth's atmosphere by having dug up and burnt much humankind's nonrenewable endowment of fossil fuels that took at least tens of millions of years of sunlight and terrestrial biological and geological to produce.

How anyone can know for a fact that these changes to Earth's protective atmospheric blanket won't cause runaway global warming is beyond me. Given that our very future and the future of our children and descendants is at stake, it is surely most imprudent to assume that we can continue to quarry and export coal iron and other non-renewable natural resources at the accelerating rate that the likes of Qld Premier Anna Bligh and our leading 'free market' economic ideologues would have us do.

My own problem with the Carbon Tax is that it is, at best, a small fraction of what needs to be done to make human civilization truly sustainable.

If the Carbon Tax were to be adopted, even if comprehensively at the international level, does anyone seriously imagine that it will somehow induce the market to reduce, to any worthwhile extent, activities that are now consuming non-renewable resources?

Just go to the rubbish tip and ask for how many more decades they believe we can continue to extract the resources necessary to manufacture all the artifacts -- thrown out hi-fis, computers, TVs, fridges, cars, furniture, toys, etc. --- and packaging that has ended up there?

How is this going to stop manufacturers continuing to manufacture and sell, at an enormous cost to our natural capital, so many artifacts that are designed to fail after only a few years and which become inoperable when parts and batteries are lost because they refuse to make these compatible with similar artifacts?

Does anyone imagine that we could go on the way we are for more than a hundred more years?

David Montgomery's "Dirt - the Erosion of Civilisations" of 2007 shows how past civilisations -- Mesopotamia, ancient Greek civilisations, Rome, the Chaco Anasazi of North America. etc., which did not dig up dug up coal, oil and metals still only lasted hundreds of years, so could not be considered sustainable.

If they had dug up and wasted coal, oil and metals and deforested at the same rate as 21st century human civilisation does they could not have even lasted that long.

Any Government which does not attempt to make human civilisation at least as sustainable as those past failed rural civilisations once were is not serious about sustainabilty.

Gillard's Carbon Tax is only a token pretence of an attempt to achieve sustainability and nothing more.

Carbon tax will be negated by population growth

If Australia takes no action by 2020 our carbon emissions could be 20 per cent higher than in 2000, not 5 to 25 per cent lower as the Australian Government intends. Bob Birrell and Ernest Healy from Monash University's Centre for Population and Urban Research found 83 per cent of the forecast increase in carbon emissions from 2000 to 2020 is attributable to population growth. It is impossible for Australia to meet the proposed greenhouse gas emissions target through domestic action. Buying permits from overseas is an essential part of the plan. This means that Australia will be gaining from other more sustainable nations. Our target for greenhouse gas reduction is actually more like a 25 per cent reduction in per capita terms just to achieve just 5 per cent overall. More consumers means energy demands will increase, while at the same time energy producers will be trying to out-pace increasing carbon emissions with "clean" energy. It's like trying to reduce the contents of a container of liquid while it is still being filled at the top! The target reduction must the keep outstripping gross emissions due to population growth. With contradictory policies coming from Parliament House, how are we to really believe and embrace the carbon tax? We should be doing some obvious things, like stabilizing our population and investing in [email protected] for alternative energy sources. Fossil fuels have spurned economic and population growth, but it must be acknowledged that the carbon age has ended.