Josh Frydenburgh, the minister for Energy and the Environment has belatedly released the greenhouse gas pollution data for the period up till the end of 2016. According to the report there has been a considerable improvement in the way the data is recorded allowing them to give more accurate estimates from individual sectors. The data show a total increase of GHG emissions of 0.7% for the last 2 quarters of that year but a considerable drop in emissions from the electricity sector. This could be due to more solar, hydro and wind use, the closure of big users like smelters but also the impact of high energy prices causing more restrained use. The new data also included historical figures going back to 2001 showing that emissions were higher than previously thought with most of these being attributed to what is called “fugitive emissions” - the GH gases like methane that escape from coal mines and gas facking. The worry from these is that methane is a much worse greenhouse gas than carbon dioxide and that the emissions from a coal mine can continue long after the mine is closed as gases are released from the exposed overburden.

The release also included a graph which showed declining emissions in terms of per capita and in per dollar of GDP growth, a process of data presentation know as decoupling, which attempts to show the best possible outcome for bad news. Decoupling also popped up in the latest State of the Environment report showing environmental damage is independent of population growth. (Apart from things like land clearing, pollution and a few others) The graph-image below will probably win a gold medal at the next Spin Doctors convention. 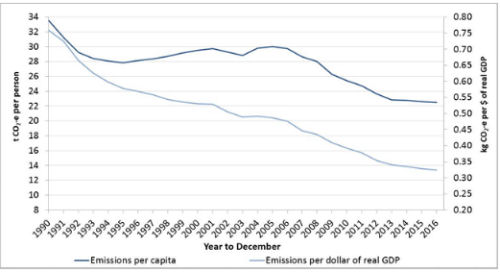 In this case the apparent good news is achieved by a thimble and pea trick - climate change is a function of absolute values of CO2-e increase and is unrelated to GDP movements. When it comes to our population's impact on GHG emissions the apparent falling line on the graph obscures that fact that our population is simply growing faster than our emissions, scarcely anything to celebrate. For a better understanding there is an article on the ministers release of GHG data in the Guardian which includes a graph of the changes in our absolute emissions showing the spikes and troughs over the period from1990 till the present which explains how the minister can make the bad news look good;

After all its not just that our emissions increased by about 6Mt, its the huge gap that exists between where we are now and where we should be if we are to meet our international requirements made as part of the Paris agreement. These require emissions to fall to at least 26% below 2005 levels by 2030 and commit us to ratchet up that ambition over time, in line with the goal of keeping global warming to well below 2deg C. In a related media interview the minister suggested that the increase in emissions could have been due to the higher number of cattle and their considerable flatulence. There is very likely some truth in this, after all more cows or cars, (and there were 1,178,133 new cars in 2016) will increase emissions, its a feature of a growth economy. We are getting cleaner cars but they will still need more roads and 50 million tires every year, just as more cows mean more land clearing, its all part of our ecological footprint which is estimated to be 7.7Ha/person.

(The ecological footprint is a number expressed in global hectares/person that measures the amount of land required to support the demand for goods and services and absorb its waste including greenhouse gasses.)

Using the concept of a global “footprint” might be a better way to gauge our GHG emissions since under the present system we do not record the impact of the GHG we export in the form of coal and gas. If we did then the graphs shown above would be highly skewed in the opposite direction. Surprisingly there has been considerable work done by the CSIRO as well as in other countries on what has been labelled as “embodied energy” which is the energy consumed by all of the processes associated with the production of a building, regardless of where it occurred. This includes the mining and processing of natural resources, manufacturing, transport and product delivery, but not the operation and disposal of the building material, which would be considered in a life cycle approach.

An early study conducted by the Australian Bureau of Statistics (ABS) found that, taking embodied emissions into account, construction was the fourth largest indirect emitting sector (excluding direct residential emissions) behind manufacturing , electricity, gas, water & waste services and transport. Other research by the Federal Government (Australian Federal Department of Industry Science and Tourism ). found that buildings are responsible for significant environmental impacts (30 % of the raw materials used, 42% of the energy, 25% of water used, 12% of land use, 40% of atmospheric emissions, 20% of water effluents, 25% of solid waste and 13% of other releases)

If we look at the broader infrastructure, including bridges, roads and so forth, materials account for upwards of 70% of total materials flows globally, a figure believed to be similar in Australia where in 2013 imported goods and services contributed 23.6% of our national carbon footprint. In the UK a study found that energy used in constructing, occupying and operating buildings represents approximately 50% of greenhouse gas emissions. They also did a study to examine the climate change implications of housing, whether it was better to refurbish an old house or build a new one to meet new efficiency targets. It found that building a new 2 bedroom house created 80 tonnes CO2e - a huge amount - while refurbishing was only 8 tonnes.
hat's the carbon footprint of ... a hoWuse | Environment | The Guardian
What's the carbon footprint of a house? (Guardian article)

The carbon footprint of building a house depends on all kinds of things – including, of course, the size of the house and the types of materials chosen. Concrete is by far the worst offender because it is used in large quantities while steel has almost the same embodied energy as plastics. Applying that modest estimate of 80 tonnes of CO2e to the Australian building industry, where in 2016 there were 200,000 houses built we get a figure of 16M tonnes of CO2e being produced every year. The large number of houses was the result of a building program to meet our population growth of some 372,800 mostly due to the high immigration policies introduced by John Howard. Had we kept to the previous immigration levels of around 70,000/year we would not have had a blow out in our GHG emissions, nor would we have around 3 million residents, many of them migrants, who are either unemployed or underemployed.

There would be other benefits as well, with less urban sprawl cities like Sydney could retain their farmland which at present supplies 20% of its food requirements as well as employment in the food industry.

There certainly would be less congestion, cleaner air, more green spaces and less infrastructure shortages. With lower demand housing would more affordable, better quality and there would be less developer-related corruption which has now extended to money laundering. Unfortunately this is not an option that will appeal to the major parties who are driven by a growth fetish nor strangely enough, will it be accepted by the Greens.

SAUDI SOLAR TYCOON Saudi Prince M. A. L. Jameel can teach all Australians a lesson (Saudi solar tycoon wins $300m handouts boost, p1,19/9). He is wise enough, and frugal enough, to recycle the profits he and his country are making from exporting non-renewable petroleum into a high profit Moree solar farm. While us brain-dead aussies, drive around and around in circles in fully imported cars, burning fully imported petrol and diesel. Giving the Saudi ruling family even more cash to buy up even more of our family silver. Just where did all the profits from iron ore and coal go again? David Z Hughes