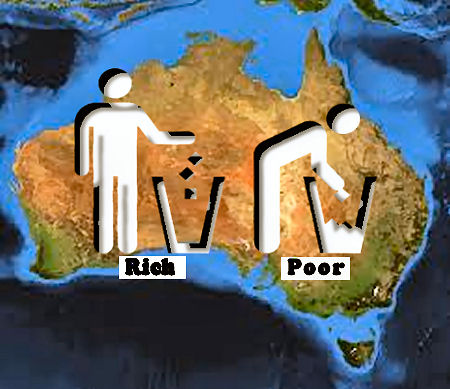 The treasurer, Scott Morrison, has just informed us that we have had 25 years of economic growth and the economy is now growing at its fastest pace in four years, meaning we may well set a new record for the longest period of sustained growth.

Well that’s great for the treasurer, he may even get the coveted treasurer of the year award, but for many people growth, fuelled mainly by population increases and their spending on housing, bears no relation to their wellbeing.

There are almost 2.5 million either unemployed or underemployed. Homelessness increased by 20% in the last 5 years, house prices have risen 147% but incomes have only risen 57%. A whopping 720,000 households spend more than 30% of their income on mortgage payments and 850,000 households are at risk of financial hardship and poverty, creating what is now recognised as “Housing Stress”.

Our major cities have sections zoned for densities far higher than would be allowed in Hong Kong and with open space at 0.1m2 per person. Private debt to the banking system, mainly from mortgages, is $1.7trillion - that's 1.7 followed by 11 zero's - which possibly makes Australia the nation with the world’s highest debt to GDP ratio of 123%.

Those are just the visible signs. Using growth as a means of qualifying economic performance is an absurdity, as it reveals nothing of importance.

In terms of expenditure on research, Australia ranks 18th out of 20 OECD countries. Australia's spending at 0.441 per cent of GDP in 2013 was ahead of only Greece at 0.391 and the Slovak Republic at 0.369. That year Japan's expenditure was 0.754 per cent, the US 0.795, and Germany 0.917% of GDP. Recent funding cuts to the CSIRO will see about 36 agricultural and bio-security researchers at the infectious diseases health unit laid off. This is our only facility capable of handling outbreaks like Ebola or Zika. The cutbacks to climate research coincided with an increase in spending on wind turbine noise and coal seam gas research suggesting government intervention on research priorities.

Our record on education is worse. A report by the Organization for Economic Co-operation and Development (OECD) , which looked at government funding of public education, ranked Australia second last, putting Australia among only a handful of countries where less than half the cost of tertiary education now comes from the public purse, with a higher than average amount directed at private schools. The report also singles out Australia for putting more costs onto university students, part of a policy of both coalition and labor governments,[1] which used full fee paying O/S students to bolster University funding. Overseas student numbers were bolstered by the linking of immigration with study, a process that promises the proliferation of “Mickey Mouse” courses and wide spread cheating. Private educational facilities have been described as the biggest rort in Australian history, one that targeted the most vulnerable in our community and created an estimated $16.3 billion in VET FEE loans by students.

Australia also has the highest proportion of international students, with 17.3 per cent of the campus population coming from abroad. In contrast, the US has just 3.4 per cent of overseas students. Almost all these students are full-fee paying. The figures underscore the degree to which Australian universities are hostage to the international student dollar.
The OECD also collects a wide range of data on government and private spending on social programs. Its latest report shows the Australian government's social expenditure (includes age pension, veterans' pension, disability support pension, unemployment benefits, study and carers' allowances, and other payments) is 19.5 per cent of gross domestic product (GDP), which puts it at 13th in the OECD nations behind even Greece, Portugal, Spain and Italy, (28%), countries considered to have lower GDP growth than Australia.
We also have the lowest ranking in the region (61st) for income security, which measures older people’s access to money and their capacity to spend it independently and the highest old age poverty rate in the region (35.5 per cent), while our pension coverage (83 per cent) and welfare rates (65 per cent) are below average.
Scarcely anything to be proud of.

[1] Candobetter.net Ed. "both coalition and labor" inserted after clarification with writer on 9 August 2016.

There was a brief news item tonight on ABC 1 about declining well- being in Australia. I have searched for a detailed report and analysis but so far have not found it. Whatever recipe governments have been using over the last decade, it' s not working.