Lady Hamer: Green Wedges destruction would be irreversible: Labor and the Libs' retort

"Any encroachment into our green spaces is irreversible. On the other hand, remaining faithful to the original intention of the green wedges, would give us all a more disciplined, sustainable, and welcoming city for the future." (Lady Hamer on 29 August 2012 as the Libs prepare to give bulldozers open slather on our green wedges, destroying wildlife and natural amenity.) Labor and the Liberals response is less than edifying and does not solve the problem. Basically both parties are in cahoots with the developers against the people of Melbourne.

Lady Hamer, widow of Rupert Hamer, a former Liberal premier who planned for Melbourne to retain the green areas (typically spreading from some major water courses radiating through Melbourne), has come out courageously against the Liberal Planning policy to horribly amputate, for more intensive development, thousands of hectares of Melbourne's green wedges, without community or electoral approval. It is great to see an elderly woman stand up and be heard, and to speak so convincingly and confidently on a moral and environmental issue. We should also not forget the many other women in Melbourne who have also spoken out on this issue, again and again. See "Anti-Growth Lobby: Women in politics: why don't more participate - or do they? (Melbourne, Australia)." 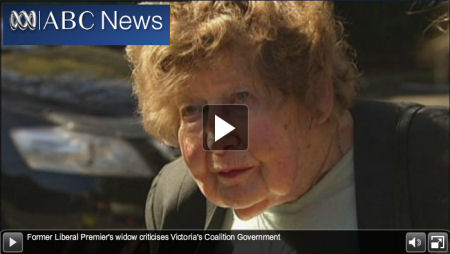 "Any encroachment into our green spaces is irreversible. On the other hand, remaining faithful to the original intention of the green wedges, would give us all a more disciplined, sustainable, and welcoming city for the future." Lady Hamer on 29 August 2012.

Mathew Guy's excuse is no excuse 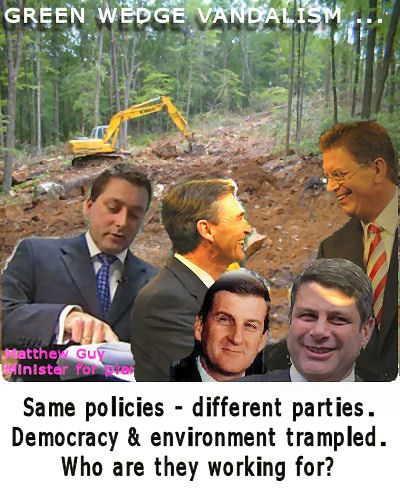 Yes, and that was wrong, because it was undemocratic, based on covert population engineering through mass migration, and aggressively reduced peoples' rights and quality of life. But that only highlights the urgent need to reverse the goose stepping army of planners who are trampling our society. It does not justify Mathew Guy continuing the destruction that Jeff Kennett began and Labor continued.

People voted Brumby out (and would have voted Bracks out if he had not suddenly resigned) because of their absurdly high-handed related attitudes to the green wedges, mass immigration, and local democracy.

Brian Tee (Shadow minister for planning) only added to the shameful obfuscation when he posted to the ALP site a laughable greenwash piece entitled,"Lady April Hamer and Bracks unite to save green wedge," (August 29,2012) following Lady Hamer's speech.

Truly, the tradition in Victoria of requiring the people to believe six impossible things before breakfast continues, proudly led by parliamentarians. The people of Melbourne are treated like complete fools. We need a giant Alice to weep on us and wash away the caucus.

Victoria is a Destruction Zone for the profit of the growth lobby!

Victoria is a destruction zone. The earth is continually churned by machines driven by greedy developers and financiers. People are becoming mentally and physically ill trying to stand up to the orkish tyrants.

At the heart of all this is the utterly undemocratic pursuit by governments of massive population growth through economic immigration. See http://www.liveinvictoria.com.au

Hypocrisy from all our politicians on the ill-fated green wedges

The Labor government are being hypocritical about the green wedges. Although they support their protection, they expanded the urban growth boundary, and continued to add to our population stress. "The facts show that the Bracks Government expanded the Urban Growth Boundary into Green Wedge land by 47,217 hectares, and the Brumby Government by 43,600 hectares," Mr Guy said.

"For the Labor Opposition to now oppose and criticise any UGB movement is complete hypocrisy."

On 23 June 2010 the Labor planning spokesperson Brian Tee made a 2,551 word statement to Parliament in support of the then Brumby Government's 43,000 hectare expansion of the urban growth boundary.

"We need to maintain the investment and the focus, and that is about safeguarding future housing now; it is about making sure we are planning for the next 5, 10, 15 and indeed 20 years."

"The challenge for us is to find more space for housing for young families, or others who want to live in the suburbs, and this amendment is about getting that balance right.

"It makes sure that we have that competitive advantage in terms of affordable housing...."

Both sides of State government claim they are making an effort to provide "affordable housing", and thus must extend the UGB and infiltrate into the green wedges. It's all about developer profits and more mortgages to drain people's earnings away from their families and futures.

According to Mr Barber, the Greens, "The fact is that there is a bipartisan policy put in place by Labor and Liberal going all the way back to the creation of the UGB in 2002 to continuously expand the size of Melbourne. It is written there in black and white in the planning scheme as it was left by the Labor Party to always allow 15 years of land supply. In other words, the urban growth boundary is a misnomer -- an oxymoron. It is not a growth boundary. It is not a boundary or anything; it just keeps growing endlessly, and increasingly those urban developments reach limits, including the limit of the public budget to provide the necessary infrastructure".

With a policy-free zone on population targets, there is no end in sight to growth. The Greens may criticize, but their open door policy towards immigration and asylum seekers offers no solutions either to our city's expanding girth! They recommend "greening" the city, with roof-top gardens and plants on balconies!