Resident planning rights should be strengthened, not watered down - Kelvin Thomson MP, Australia

Federal Labor Member for Wills, Kelvin Thomson, has condemned reports in an article by Josh Gordon, "Push to cut planning appeals,"The Age, 29/11/11, that the Victorian Liberal Government is seriously considering proposals to further reduce the rights of residents to object to inappropriate developments in their neighbourhoods. (Mr Thomson's electorate of Wills, Victoria, Australia, has very high population and development density, with severe traffic congestion.) 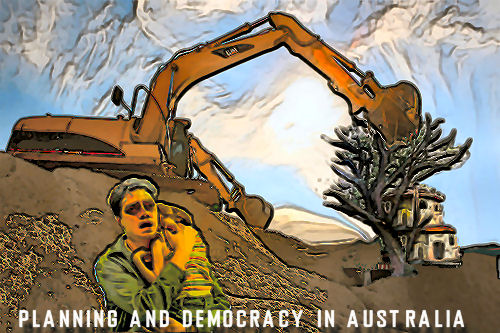 The Victorian Minister for Planning, Mathew Guy, is considering industry proposals to reduce the standing of the public to object to commercially-motivated development of their built and natural environment, according to the Age article.

Master Builders Association of Victoria executive director Brian Welch has been quoted as believing that current rules are ''excessively democratic'' and that they encourage ''vexatious objectors.''

Mary Drost, of Planning Backlash and www.marvellousmelbourne.org has said that she would be opposed to any reduction in rights to objection. She later observed that the Master Builders complain that 7% of applications end up in the Victorian Civil and Administrative Tribunal (VCAT). "What this says to me is that 93% go straight through. They have nothing to complain about as far as I can see."

The Victorian Treasury department has called for an overhaul of the land-planning framework to reduce conflicting policy objectives between government departments, which it sees as providing excessive scope for appeals.

''The land planning framework should be overhauled to reduce the scope for appeals due to conflicting policy objectives, clarify who has standing to appeal planning decisions and assess the potential for greater use of market instruments to achieve planning objectives,'' according to the treasury briefing document.

“Premier Ted Baillieu and Planning Minister Matthew Guy when in Opposition were very critical of the former State Government’s handling of the planning system. They have no mandate whatsoever to contemplate measures to further reduce residents say on planning and development proposals.

“The plans being considered by the Liberal State Government would provide less scope to appeal against contentious planning proposals. The Age report suggests that the appeal process could be pared back to cut the number of objectors, on the basis that it costs developers money.

“Such an approach displays an arrogant disregard for the costs that high rise concrete monstrosities impose on local communities- more traffic, more congestion, more carbon emissions, increased pressure on local infrastructure and services, the suffocation of local amenity and the effect on physical and mental wellbeing.

“All too often property developers make handsome profits at the expense of local residents and communities, profiting from infrastructure which local communities have built and paid for, and leaving locals to live with the inconvenience of loss of amenity which comes with more crowded neighbourhoods.

“In my own electorate there are numerous examples of residents and neighbourhoods being short-changed, disregarded, and left to pick up the pieces- such as the Union Street U108 development in Brunswick, the Kodak Redevelopment and former Coburg High School site in Coburg, the Bell St-York St and Cumberland Rd developments in Pascoe Vale, the former Tip Top Site, Nicholson St and 240 Lygon Street developments in Brunswick etc.

“Developers use doublespeak terms like "sustainable", "exemplary design", "efficient planning" and "reduced footprint". These are all code for removing residents' rights to meaningfully object to developments in their neighbourhoods.

“Any further moves to prevent residents from having a say will only damage the quality of life for residents in Melbourne, and take our city down the road of the high-rise concrete jungles of Asia and Latin America.

“The planning system needs to provide residents, local communities and local councillors with a greater ability to have a say on what developments are appropriate for their neighbourhoods- not a reduced one”, Mr Thomson concluded.

Victoria's economy is almost totally reliant on the growth and dominance of the property and housing market. Many of these high rises are not for Australians but are sold overseas. It's a lucrative market, and brings in foreign money to our economy. The fact that is isn't democratic or consultative is neither here nor there any more. Planning has more to do with breaking down barriers and regulations of any previous restrictions and plans, and is more about a frenzied property industry than common sense or transparency. The developers have all the cash, and they are able to "buy" favours. The State government is just a facilitator of the real estate market. The corruption goes down deep, but we are fooled by the facade of democracy. Population growth must continue because we need a continual influx of buyers, and many residents are unable to afford, or desire, the high density and high rises being built now.

Can't argue with that, Mary. You are absolutely on the nail.

Cooperation is our downfall

It's interesting how so many people say, when talking generally that we must all pull together somehow, allow high rise and high density to accommodate an ever rising population. Somehow they have swallowed the propaganda in the main media that growth is inevitable and we must accommodate it (ad infinitum) by increasing the density and height of our living arrangements. This is all very cooperative and nice and the changes can be tolerated in the short term as long as the adverse effects are not directly in one's face, like next door! The catch is that the effects - e.g. increased traffic and increased rates to cover the upgrade of infrastructure, greater competition for use of public parks and gardens are felt when it is too late if one did not notice it coming because the offending overdevelopment was 2 blocks away rather than in the same street. This is one of the reasons the growth lobby and associated developers get away with what they are doing. We are eager to do our bit with everything, saving water (for ever greater population) relinquishing our back yards, but for what? People only seem to get fired up about what is detrimental to them when it is amplified by being in direct confrontation. If it is in the next suburb or "over there" (as a friend of mine described a proposed high rise development in his suburb that was not next door , therefore acceptable) then it passes under the notice of most but is felt by degrees as this process is repeated.