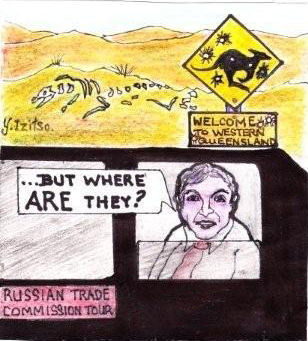 Last year Russia banned the import of kangaroo meat because of health concerns. The European Union President is also advocating a ban on kangaroo meat, but for wildlife preservation and cruelty reasons. Australian AgForce and the Australia-Russia Business Council have got together with the Queensland government to try to reverse this situation and they have been strongly courting the Russian meat trade again. In early June the Russian Trade Minister Yuri Aleshin was toured around Western Queensland with this trade in mind. Ironically he was recorded on an ABC radio broadcast posing the question regarding the kangaroos..."but where are they?" Obviously he had not seen the 'hordes' that are so often said to exist.

Last year I visited a kangaroo rehabilitation center in Queensland where orphans are raised by the remarkable Anne Maree Dineen. I was struck by how small the kangaroos there were compared to those I see on the Mornington Peninsula in Victoria. Anne-Maree told me that the average life-span of a kangaroo in Queensland is about 2 years, since so many are shot. The big ones are shot first, then the trade goes after the little ones. Their normal life-expectancy can be 20 years plus under other conditions. I also noticed the extreme nervousness and vigilance of these small kangaroos there, which was also in contrast to those in relatively safe conditions in Victoria - albeit the Victorian ones are being starved out by development, harassed by farmers and killed on roads there, as safe havens go under tarmac.

Harder to see kangaroos in the wild these days

From a friend Pam: Today I caught up with some old friends from Healesville Victoria who were up here on the Sunshine Coast Qld on holiday. They do a lot of travelling and said they had recently travelled from Tocumwal to Bourke to Charleville and did not see a single kangaroo on the way. "It’s embarrassing for Australia that we eat our own wildlife ....I’m here to tell you it’s just not right. Simply do not buy, use or eat kangaroo products” ~ Steve Irwin Sign the most important petition ever created to help kangar

No kangaroos in the wild

A few years ago I went on a short coach trip from Melbourne, via South Australia, to Central Australia and Uluru and back. The coach had so anti-roo attachment, but we didn't see ONE KANGAROO the whole time! Not one! There were a few wild emus seen in the distance, but no kangaroos or wallabies. International tourists would be very puzzled, I am sure, and disappointed. This is Australia, and our wildlife are being annihilated by commercial forces and kangaroo-hating land-owners.

Sanitising of language a clever ploy

The Australian kangaroo "harvesting" industry as Russia takes up to 70 per cent of supply. The industry contributes up to $270 million to the Australian economy per year and employs over 4000 people. Everything Australian is being reduced to $$$ and jobs and economic growth! The use of language such as "harvesting" makes it sound acceptable, and distances us from the blood-curdling industry of going out at night in wildlife territory and the stalking and killing of native animals, and bashing joeys to death! The sanitising of language gives some justification, as if kangaroos were some sort of crop, a valid resource, a processes of gathering mature crops from the fields. This is quite contrary to the "harvesting" of native animals, or to the sustenance hunting of indigenous peoples.