The Vanishing of Bees - film

The Discovery of Honey, painting by Piero di Cosimo, taking the happy social connotations of honey to the mythical plane.

According to the film, 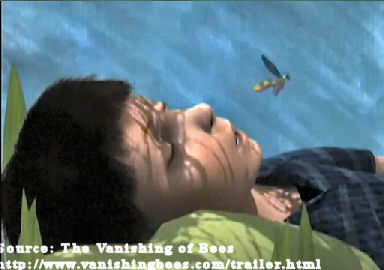 The Vanishing of Bees, there are 90 food crops dependent on bee pollination. If we lost bees, rice, corn, and wheat would continue to be available, but there would be little fruit or vegetables.

In "Pollination and Reproductive Behavior of Crop Plants" by Dr. C Kameswara Rao of the Foundation for Biotechnology Awareness and Education, Bangalore, India, Dr Rao says, "Biotic pollen vectors such as honey bees and bumble bees and some others have an important role in sustainable agriculture, but that has been exaggerated, romanticized and emotionalized by expansive claims by the environmentalists." 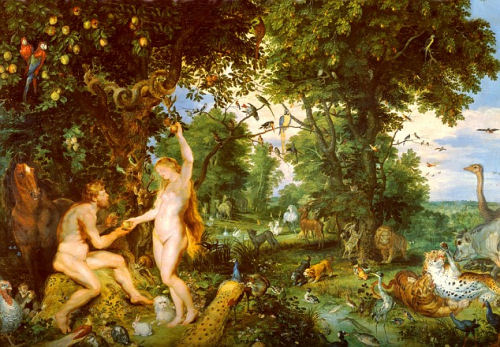 To highlight the shallowness of confining discussion to human survival prospects alone with a severely depleted and dumbed-down natural ecosystem, consider how it makes you feel to contemplate the myth of the Garden of Eden without the food trees and flowers and almost devoid of wild birds and animals - for all of the other creatures on earth depend on a natural environment which relies heavily on pollination. Agribusiness and genetic plant engineering aren't going to look after them. To the contrary! 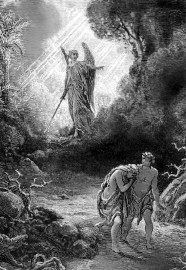 Without the bee, it would be as if we had all been banished from the garden of Eden, a notion which gives pause.

See also "From Watchdog to Lapdog: An Insider's History of the EPA"
The name which has been given to the problem of bee colonies dying off is "Colony Collapse Disorder - CCD".

The blog associated with the film implicates pesticides in this awful problem, notably one from Bayer’s CropScience division, Clothiantin, with the trade name Poncho® among others.

"BAYER are the last remaining major global brand still producing and distributing this vile pesticide even though it is proven that farmers can Banned in Europe, this European company sell this primarily to the poorest countries in the world – including to many farmers in India where they dominate the pesticides market.

We believe that this is wrong and that BAYER should live up to their responsibilities and support a global ban rather than fight it. 14 years ago, they also pledged to remove some of the most toxic pesticides from the Indian market. And they still have not yet done that!"

"Bayer makes baby aspirins (which are supposedly bad for infants) and also gives headaches to bees.

Bayer has global sales of $45 billion and owns a subsidiary called Bayer CropScience AG that manufactures herbicides, fungicides, and insecticides as well as treated seeds. CropScience alone does $8.8 billion in global sales that is about 20% of Bayer’s business.

Poncho and Gaucho are some of the trade names that have caused strife to the bees.

The EPA in a fact sheet issued 5/31/2003 has described Bayer’s Clothiantin, one of who’s trade names is Poncho® a pesticide from Bayer’s CropScience division, as follows: “ Poncho® is highly toxic to honey bees on an acute contact basis (LD50 > 0.0439 µg/bee). It has the potential for toxic chronic exposure to honey bees, as well as other nontarget pollinators, through the translocation of Poncho® residues in nectar and pollen. In honeybees, the effects of this toxic chronic exposure may include lethal and/or sub-lethal effects in the larvae and reproductive effects in the queen.”

In May 2008 Germany banned the use of Poncho® when German beekeepers reported loosing over 50% of their hives after a Poncho® application was linked to the deaths of millions of bees in the Baden-Württemberg region. Bayer responded that the toxic effect was an isolated incident caused by an “extremely rare” application error. So Poncho® is banned in Germany where Bayer was founded in 1863 and has its global headquarters. After the “extremely rare” application error people started to link Poncho®with Colony Collapse Disorder (CCD).

Because this country doesn’t adhere to the Precautionary Principle. In other countries when there is a slight risk they err on the side of caution. Not in America. Money and Greed rules."

See also :
"Trouble with bees", ABC Radio National's Background Briefing of 29 Jul 07, including transcript and link to 22Mb MP3 file.
A typically excellent documentary from the Background Briefing team. Much of it describes the insane US agricultural which is dependent, for pollination, on mobile bee colonies which are transported in trucks backwards and forwards across the US.

tinyurl.com/mvv8rk www.sciencedaily.com/releases/2009/08/090826110118.htm Heat Forms Potentially Harmful Substance In High-fructose Corn Syrup, Bee Study Finds ScienceDaily (Aug. 27, 2009) ? Researchers have established the conditions that foster formation of potentially dangerous levels of a toxic substance in the high-fructose corn syrup (HFCS) that is often fed to honey bees. Their study, which appears in the current issue of ACS' bi-weekly Journal of Agricultural and Food Chemistry, may also have implications for soft drinks and dozens of other human foods that contain HFCS. The substance, hydroxymethylfurfural (HMF), forms mainly from heating fructose. In the new study, Blaise LeBlanc and Gillian Eggleston and colleagues note HFCS's ubiquitous usage as a sweetener in beverages and processed foods. Some commercial beekeepers also feed it to bees to increase reproduction and honey production. When exposed to ***warm*** temperatures, HFCS can form HMF and kill honeybees. Some researchers believe that HMF may be a factor in Colony Collapse Disorder, a mysterious disease that has killed at least one-third of the honeybee population in the United States. The scientists measured levels of HMF in HFCS products from different manufacturers over a period of 35 days at different temperatures. As temperatures rose, levels of HMF increased steadily. Levels jumped dramatically at about 120 degrees Fahrenheit. "The data are important for commercial beekeepers, for manufacturers of HFCS, and for purposes of food storage. *****Because HFCS is incorporated as a sweetener in many processed foods, the data from this study are important for human health as well," the report states. It adds that studies have linked HMF to DNA damage in humans. In addition, HMF breaks down in the body to other substances potentially more harmful than HMF.***** Journal reference: LeBlanc et al. Formation of Hydroxymethylfurfural in Domestic High-Fructose Corn Syrup and Its Toxicity to the Honey Bee (Apis mellifera). Journal of Agricultural and Food Chemistry, 2009; 57 (16): 7369 DOI: 10.1021/jf9014526 Adapted from materials provided by American Chemical Society, via EurekAlert!, a service of AAAS.

The number of elephants in the room is becoming quite a crowd!

Earth Day, 2007, Captain Paul Watson of the Sea Shepherd Conservation Society said: Albert Einstein once wrote that "if the bee disappeared off the surface of the globe, then man would have only four years of life left. No more bees, no more pollination, no more plants, no more animals, no more man." That is the Law of Interdependence. He said, "Forget global warming folks. The disappearance of the honeybee could end our existence as human beings on this planet far sooner than we think." Mainstream society has got onto the bandwagon of climate change, quite validly, but the number of elephants in the room are becoming quite a crowd! Besides increasing consumption of dwindling resources due to swelling populations, the acidification of the seas, the loss of potable water, the collapse of fisheries, the loss of pollenation of our plants from lack of bees is so simple, yet so basic! This could "get" to us before climate change hits us properly! With failure of crops, the impact would be profound and much more immediate. The human species is deeply flawed, yet intelligent, creative and in-sightful in many areas, but really dumb in basic environmental and natural instincts and in long-term strategies for survival.

I've heard that attributed to Einstein before. I wonder if it is really true? It would be/is becoming a huge tragedy the whole agriculture smozzle, but some of us and some plants would live without bees, according to the film and reports in the article on bees. But we would have slid down the rungs of safe occupation of this planet much closer to our own extinction. I think that there are a bunch of people out there who have managed to get into power mostly through making lots of money who are susceptible to childish ideologies about 'efficiency' (one day I will write about the silliness of that notion) and the importance of human beings, and who have no profound education in anything, notably no understanding of biology and no imagination about their own role in the universe.