Nazi monuments in Ukraine mushroomed from 2014 (time of US interference)

The text below is excerpted from (Lev Golinkin, "Nazi collaborator monuments in Ukraine,"The Nazi collaborator monument project, https://forward.com/news/462916/nazi-collaborator-monuments-in-ukraine/.  This site is usually a subscription-only site, but the information for Ukraine has been made available to the general public because of the current (2022) war in Ukraine.  There are more links to photographs of relevant monuments in the original text than we provide below, for technical reasons - the URLs are too long for the settings of this candobetter site.​

L’viv and Ivano-Frankivsk — 1.5 million Jews, a quarter of all Jews murdered in the Holocaust, came from Ukraine. Over the past six years, the country has been institutionalizing worship of the paramilitary Organization of Ukrainian Nationalists, which collaborated with the Nazis and aided in the slaughter of Jews, and the Ukrainian Insurgent Army (UPA), which massacred thousands of Jews and 70,000-100,000 Poles. A major figure venerated in today’s Ukraine is Stepan Bandera (1909–1959), the Nazi collaborator who led a faction of OUN (called OUN-B) [Reference to picture, not reproduced here.] Many thanks to Per Anders Rudling, Tarik Cyril Amar and Jared McBride for their guidance on Ukrainian collaborators. 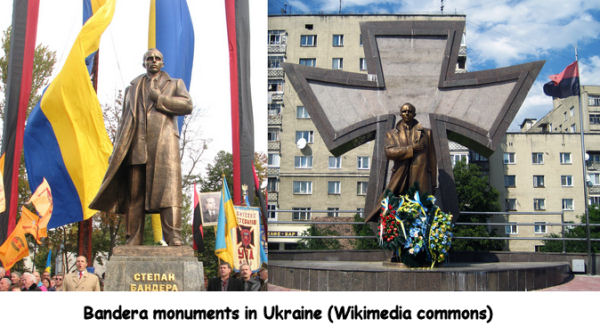 Kyiv — In 2016, a major Kyiv boulevard was renamed after Bandera. The renaming is particularly obscene since the street leads to Babi Yar, the ravine where Nazis, aided by Ukrainian collaborators, exterminated 33,771 Jews in two days, in one of the largest single massacres of the Holocaust. Both the Simon Wiesenthal Center and the World Jewish Congress con 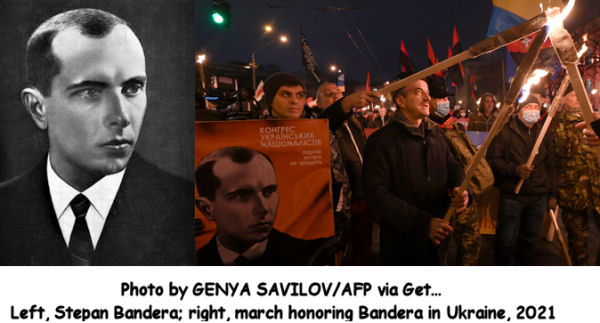 The annual torchlight march on Bandera’s birthday in 2021; during the 2017 commemorations marchers chanted “Jews Out!” 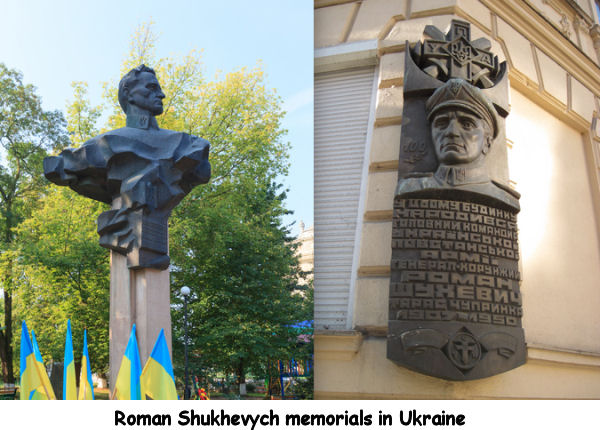 The monument in Krakovets (above left) and plaque in L’viv (above right) are two of many Shukhevych statues in Ukraine. This includes joint monuments to him and other nationalists in several cities (see Bandera entry above) a monument to him and other nationalists in Sprynya; a monument, two plaques and a bas-relief in L’viv Polytechnic National University in L’viv; and monuments in Ivano-Frankivsk, Kalush, Khmelnytskyi, Khust, Kniahynychi, (and a plaque), Kolochava, Oglyadiv,Shman’kivtski, Staryi Uhryniv (at the Stepan Bandera museum),  Tyshkivtsyah, Tyudiv, and Zabolotivka; plaques in Buchach, Kamianka-Buzka,Kolomyia, Pukiv, Radomyshl’, Rivne and Volya-Zaderevatska; a museum in Hrimne; a stadium in Ternopil; and a school in Ivano-Frankivsk. The Algemeiner on Israel slamming naming the Ternopil stadium for Shukhevych.

[Reference to Shukhevych monuments in Canada, not reproduced here.]

Additionally, Shukhevych is honored with several dozen streets in Ukraine. Most of the Bandera and Shukhevych statues are in western Ukraine, in towns where the Jewish population was exterminated by paramilitaries loyal to these men. A major boulevard has been named for Shukhevych in Kyiv as well. The World Jewish Congress condemned the glorification of Shukhevych and the statue in Ivano-Frankivsk. 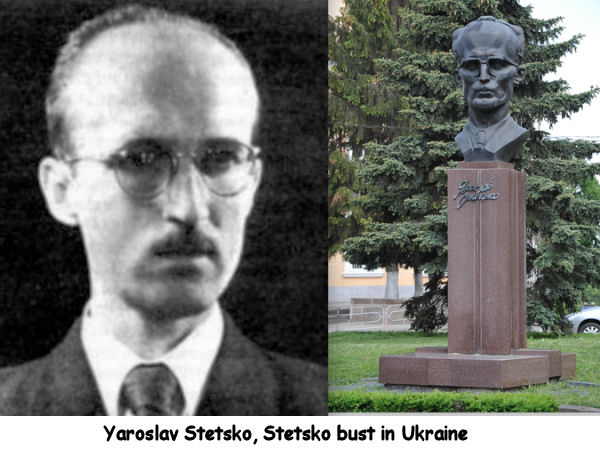 Ternopil — A bust of the genocidal Yaroslav Stetsko (1912–1986), who led Ukraine’s 1941 Nazi-collaborationist government which welcomed the Germans and declared allegiance to Hitler. A rabid antisemite, Stetsko had written “I insist on the extermination of the Jews and the need to adapt German methods of exterminating Jews in Ukraine.” Five days prior to the Nazi invasion, Stetsko assured OUN-B leader Stepan Bandera: “We will organize a Ukrainian militia that will help us to remove the Jews.”

He kept his word — the German invasion of Ukraine was accompanied by horrific pogroms with the incitement and eager participation of OUN nationalists. The initial L’viv pogrom alone had 4,000 victims. By the war’s end, Ukrainian nationalist groups massacred tens of thousands of Jews, both in cooperation with Nazi death squads and on their own volition.

Stryi and thirteen other locations — Additional Stetsko monuments are found in Stryi (above left), which also has a Stetsko street, Velykyi Hlybochok (above right), which also has a Stetsko museum (with plaque) and school, Kam’yanky and Volya Zaderevatska. Stetsko also has a joint monument to him and other OUN leaders in Morshyn and streets in Dubno, Khmelnytskyi, Lutsk, L’viv, Monastyrys’ka, Rivne, Rudne, Sambir and Ternopil. After the war, Stetsko — the man who formally pledged his government’s loyalty to Hitler — moved to the U.S., where he quickly rose into the highest circles of Washington. He was lauded as leader of freedom fighters by Ronald Reagan and George H.W. Bush.

Below left, Stetsko meeting with then-Vice President Bush, 1983. Below right, Stetsko’s signature on the Proclamation of Ukrainian Statehood with a pledge to “work closely with National-Socialist Greater Germany under the leadership of Adolf Hitler.” 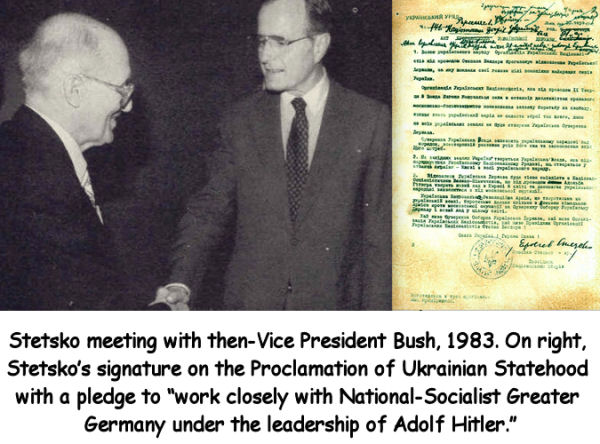 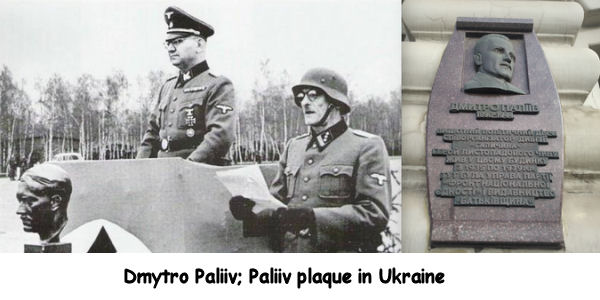 L’viv — A memorial plaque to Dmytro Paliiv (1896–1944), co-founder and SS-Hauptsturmführer of the SS Galichina 14th Division of the Waffen-SS (1st Ukrainian), unveiled 2007. SS Galichina was formed as a division in the Waffen-SS in 1943; among the formation’s war crimes is the Huta Pieniacka massacre, when an SS Galichina subunit slaughtered 500–1,200 Polish villagers, including burning people alive.

Above left, Paliiv (holding paper) at an SS ceremony, 1943–1944. This Waffen-SS officer has a plaque and bas-relief in his birthplace of Perevozets’ (unveiled 2001) as well as a plaque and street in Kalush. The JTA reported on death threats to a man who opposed naming the street.

For monuments to Ukrainian Nazi collaborators outside of Ukraine, see the U.S., Canada and Australia sections [on the original site at https://forward.com/] .

Ukraine is erecting new plaques and monuments to Nazi collaborators on a nearly weekly basis. Eduard Dolinsky of the Ukrainian Jewish Committee chronicles this explosion of Nazi collaborator whitewashing on Twitter, and wrote about it in The New York Times. For more on Ukraine’s state-sponsored Holocaust revisionism see the Nation, Foreign Policy, Open Democracy, a press release from the U.S. Holocaust Memorial Museum and Defending History’s Ukraine page.

Zelensky as comedian joking about Nazis getting state funding