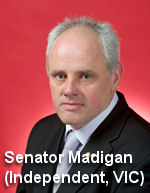 I have often spoken about a constituent I know called Phil. Phil works in a forge and is supporting five children. He lives outside of Melbourne. Phil earns $43,000 a year, with another $8,000 on overtime. Phil's is backbreaking work. Phil is a big and strong man, with the strength and resilience of a draft horse, but he has often said to me, 'John, I'll never last until I'm 70.' Treasurer Joe Hockey expects Phil to keep doing what he is doing for another 24 years. I say to Mr Hockey: 'Mate, you're dreaming.'

As usual, I will be brief in my remarks today. I will let my voting do the talking. But, as this legislation affects families and job seekers, I cannot help but share my view. Families are the building blocks of strong societies. A strong family makes a strong individual. Strong people are the backbone of a strong country. The relationship between government and families should be one of mutual respect. Governments should support families.

Forcing both parents into workforce when children young

Forcing both parents to be in the workforce when the youngest child turns six is not the kind of help families need. It is not the kind of thing our nation needs either, because the nation and the family are interdependent. Families are doing it tough. Most parents, particularly those in the paid workforce, recognise the importance of spending time with their children. But, for hundreds of thousands of Australian parents, the financial concerns they face overshadow their ability to do this. This is something our tax system, and my amendments, can address.

House prices add to a family's financial burdens. Single- and even dual-income family first home buyers are forced to compete with baby boomer investors as well as foreign nationals to buy their home. Today in Australia, families are often second-class citizens in the housing market. Why don't we look at negative gearing, amongst other things?

Growing job insecurity prevents families from taking care of themselves

When we look at the economy and job security, we must further consider how Australians can focus their energy on their families. But we in this place are not discussing legislation which will make it easier for these families. Instead we are discussing how we can take more of their taxes away from them by doing away with benefits which were originally given to them in recognition of the important role they play. Take, for example, the removal of the current end-of-financial-year supplement, the freezing of the indexation of the family tax benefit allowance or the removal of the child add-on supplement. This legislation is not about supporting families. It is about making life harder for them.

Newstart inequities and 457 visas, rising cost to business of electricity

If people opt to work for the dole then they should be entitled to their full allowance during the six-month waiting period. If people have spent years studying as a student then that period should be recognised as work to be deducted from the exclusion period. If people would prefer to spend the exclusion period not working for the dole but rather concentrating full time on finding a job then they should still be able to receive 40 per cent of the Newstart rate.

We must create hope. We must create opportunity. We must increase the cake, not diminish it. The future of our country and the welfare of our people depend on it. We often hear about business and individuals being told to innovate. It is about time the government innovated.

It's assumed we can grow out of our budget constraints

Treasurer Mr Hockey said that the final budget deficit for the 2013-14 financial year had come in at $48.5 billion, $30 billion more than forecast. When Labor’s last budget was handed down in May last year, then treasurer Wayne Swan projected a deficit of $18 billion. “The Government inherited a shambles of a Budget, a weakening economy and rising unemployment,” Hockey said. National income is falling, owing to the slump in the terms-of-trade, which is pulling down nominal GDP – the dollar value of what’s produced and earned and also the measure that drives taxation revenue. The Federal Government will remain under heavy pressure on the revenue-side of the balance sheet. It also faces rising expenditures from both rising unemployment (increasing welfare payments) and an ageing population. It means squeezing as much from welfare and pensions as possible, yet the irony is that our "Team" size will keep increasing through extra immigration! Surely if a family is struggling with debt, and on borrowed interest payments, they shouldn't be having more "babies" they can't afford? It's assumed that Australia can grow out of our budget woes, and that more "growth" will bring us back to surplus! There is more unemployment among migrants, and the only industry "booming" is housing! Skilled migrants are being sought when there is no "shortages" of skills. Like the NSW "gas shortage" scare, it was really a case of multinational mining companies having unlimited access to Australia's LNG supplies, leaving no reserves for the domestic consumers. Similarly, we export our university courses for $$$, then claim we have a "shortage" of skilled workers! It's simply poor resource management, not any shortages or deficits.

Evidence is in the consequences

Some say that we need population growth to prosper and improve the quality of our lives and provide abundance. Some say that we need further subdivision, more units, more building of dwellings to provide affordable housing. The following points in my opinion, can not be made often enough. We have been DOING THIS for years, and it has NOT been working. Every suburb is witnessing houses torn down en masse for "infill", towers are going up everywhere. "Dwelling" construction is high. Immigration is high. Yet prices are higher than they've ever been, the budget is poor, retail sector struggling, GDP per capita stagnating or declining and overall belt tightening. We have been doing this, and there are no results. The last thing to do, is more of what has been failing.