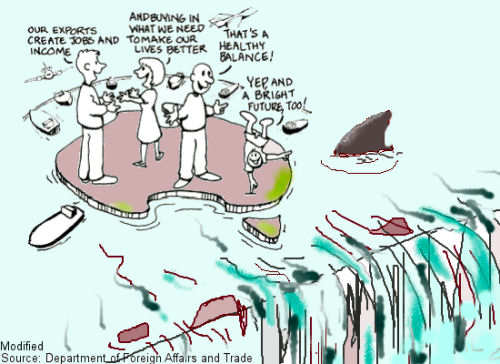 Our growth-based economy is a big Ponzi scheme

After decades of economic growth, debts are accumulating and austerity measures are being distributed onto the public. Australian economy has performed remarkably well over the last two decades, as we've been told. However, why are there cut backs all the time, especially to health?
Prime Minister Tony Abbot was giving a speech to the Australian-Canada Economic Leadership Forum in Melbourne, hinting at just this – as summarised bluntly by Christopher Pyne, Minister for Education:

"[The Prime Minister] said that the current growth in education and health expenditure was unsustainable, and that is true."

Australia: an economic ‘star’, but are we happier?

What's Tony Abbot's vision for economic growth? If vital spending such as education and healthy are being trimmed, and declared unsustainable, then why is our economy intricately linked to the housing and property markets, and population growth? Surely the purpose of our economy basically, is to serve us, and provide for the basics such as education and health, and high living standards. Instead, we've become slaves to it, and it's being forced to "grow" to our detriment.

A "surplus" is what is aimed for, but at the cost of how many cutbacks? Considering we have the highest unemployment rate since 2003, along with an increase in those registering as “long-term” unemployed, up 13.5% since January 2013, and more part time jobs being created than full time, surely we have over-shot our economy with regards to population size that can be employed and accommodated.

At present trends, each generation will be worse off, and our descendent will be sacrificed on the altar of "economic growth". There will be more people living outside participating in the economy, and less home ownership.

The housing boom can't be maintained, and it must implode through infrastructure debt, costs of living, and unaffordable mortgages.

Our economy has become, due to it's inherited basis, a big Ponzi scheme, heavily based on rising new taxes from population growth, and revenue for land subdivision and housing. The promised "prosperity" is not being produced, for the majority. Yet, we are trapped in this juggernaut of growth, debt, spending, importation of more people (taxpayers and buyers) and it becomes an addiction cycle.

Rather than skills shortages, we are in an overload

The total minerals and agriculture workforce is only about 5% of the Australian workforce; which is less than the number of unemployed people. The big mining boom was meant to be a platform for "big Australia" and great economic growth. However, all the empirical evidence is otherwise. A youth jobs crisis is threatening to expand across Melbourne after the biggest rise in the unemployment rate - in the eastern suburbs instead of the struggling west. It's a spreading threat, and a symptom of population overshooting our economy. It's not only in Melbourne, but across our country. There has been a shrinking of labour-intensive workforces and a shift by employers from being skill developers to skill buyers. Importing skills from overseas is a quick fix, instead of having to train locals. In the face of an ageing population, there is little doubt that a continued high rate of youth unemployment will adversely add a heavy burden on tax payers and welfare. Compliant temporary workers from overseas are more likely to be an attractive option for big businesses as they lower wages and conditions, and they are willing to get sponsored for PR. Our government is obsessed by high rates of GDP, increased by a continual injection of people from overseas. There's no correlation between grass-roots lobbying, the real world of struggling in the face of excessive numbers of skilled workers who are unemployed, and population overshoot. The "skills shortages" being advertised across the world is looking more of a lie and based on pure political spin with no basis in reality. Our educational institutions are failing to address educational requirements of our country, and instead have become degree factories, and part of the immigration program to lure people here for a "better life".