Santa acted on bad advice and sold the lot
He really didn’t care a jot
For monetary rewards
Which the boss could get with much lower awards,
As workers slaving all over the world
Earn much less than at the Pole we’re told
So many changes came to bear
Santa was nearly pulling out his hair!
His polar elves stood to get the sack
But he held fast to them as they had the knack
Of making toys beyond compare,
They truly had just so much flare. 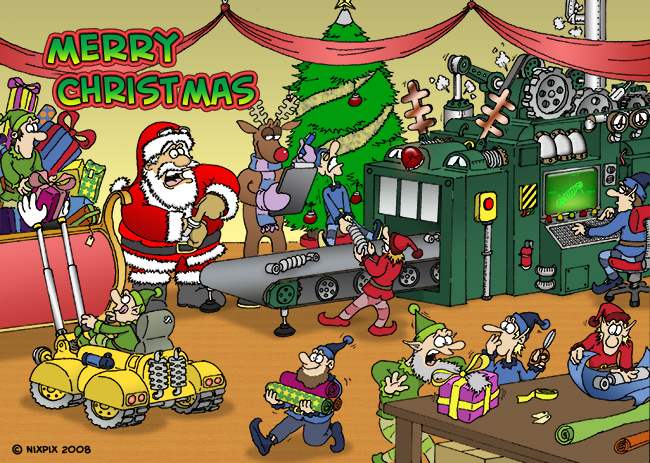 So was it good or was it bad?
Or was Santa really "had"?
He works so hard with his staff of elves
He was told they would have much more for themselves,
But as they’re paid in toys, not money
The whole thing seems just terribly funny!

For one thing. People are unpleased with the current state of affairs:

Rear entrance to revolution in Ukraine. of 19 Dec 2013 by Frank Enria

Thank you for the comment. We should have posted information about the Ukrainian conflict before now. In some ways, it mirrors the conflict in Syria, although the Syrian government seems to be handling the conflict more ably than the those resisting the cancerous spread of the New World Order in the Ukraine. (In the Syrian Arab Republic the death toll has reached an appalling 120,000, but, at least, they have so far defeated the "regime-change" efforts of the United States, its terrorist proxies and other regional allies.)
For more information about the Ukraine, see Putin Scores a New Victory in the Ukraine of 24 Dec 2013 and US Sponsored "Democracy": A Tale of Two Protests. Ukraine and Thailand of 21 Dec 2013 on Global Research. Other useful resources are Russia Today and the Iranian Press TV from Iran. - Ed