Chair of the Plan Melbourne Committee, Professor Roz Hansen, has been quoted saying that the government is spending $6 billion to $8 billion on a road solution that belongs in the 1960s or 1970s and that ‘it is not smart, innovative or progressive thinking’. She is thus now in step with majority opinion among Melbourne's community groups. Attendance at the protest today was representitive of the broader community, comprising many members of important community groups, plus the Greens, Opposition politicians, and local government figures. Julianne Bell of Protectors of Public Lands Vic, has been battling to protect one of Melbourne's most important public parks, Royal Park, since 1996, in particuar from the regularly recurring attempts of successive Victorian governments to build the East West Link which would destroy what remains of Royal Park. This is an affront to democracy and would be the theft of one of Mebourne's greatest assets. 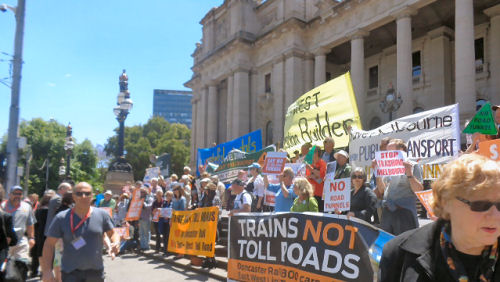 The following resolution, addressed to the Premier of Victoria Denis Napthine:

"That this rally wishes to convey to you our total opposition to the East West Link Toll Road project and our support for funding instead of desperately needed public transport projects namely - the Melbourne Metro and the Doncaster, Rowville, and Airport Rail Lines" moved by Julianne Bell and seconded by Rod Quantock was carried unanimously and the message was relayed to staff at Parliament House. 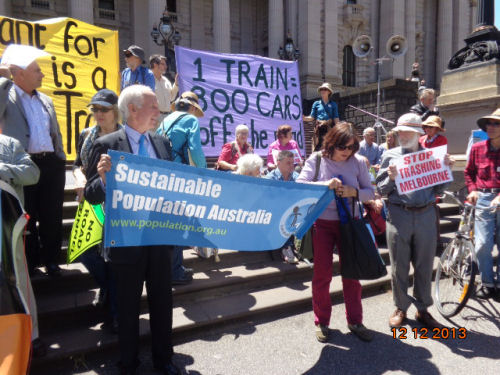 Thursday 12 December is a significant day in the ongoing battle over the East West Link Toll Road for Protectors of Public Lands Victoria Inc (PPL VIC) to host the snap protest. It is the last day of the sitting of Parliament before it goes into recess and is our last chance to point out again to the Government the folly of proceeding with the project which will signify damage to the environment, reduction of Royal Park to Ground Zero, heritage desecration, destruction of residential amenity and reckless expenditure of $8b on a mammoth roads project - the biggest in Victorian history. In addition it is D-Day for public submissions on the Comprehensive Impact Statement on the East West Link. 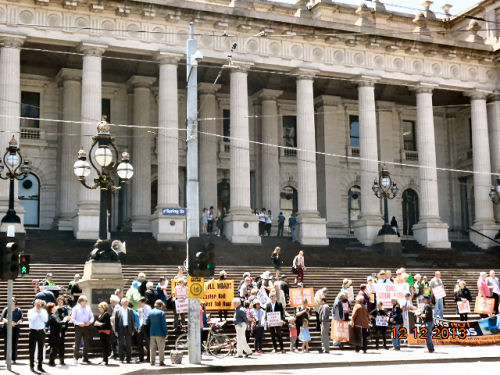 The protest kicked off at 12:15 pm on the steps of Parliament and heard from Members of Parliament (ALP and Greens), the Mayors of the Cities of Yarra and Moonee Valley and a number of Councillors plus of course the resident, protest and community groups who have led the great tide of opposition to the East West Link and have been advocating for public transport, notably the Doncaster Rail Link. The Public Transport Users’ Association spoke on their latest campaign “Public Transport not Traffic.”

Julianne Bell, the Secretary of PPL VIC commented as follows:

“News today reports that the Government’s own advisory Committee on “Plan Melbourne”, the new blue print for the city for 40 years, has resigned after having denounced the East West Road Link.

The Chair of the Committee Professor Roz Hansen is quoted in the media as saying that government was spending $6 billion to $8 billion on a road solution that belonged in the 1960s or 1970s and that ‘it is not smart, innovative or progressive thinking’.

A large group of representatives of community organisations were at the City of Melbourne meeting on Tuesday night and actually heard her full, electrifying speech. This is reflective of the lack of confidence in the East- West Link project being expressed right across Melbourne. ”

Public left in the dark to make submissions 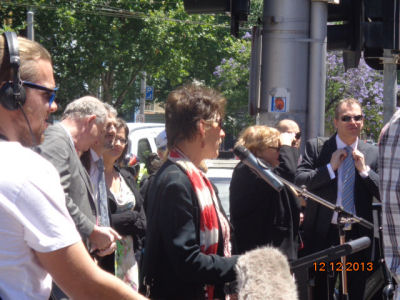 The community is having difficulty trying to write submissions on the C.I.S of the East West Link as, to date, planning for the project appears to have been undertaken on the run so the community does not know its full impact and information has only been released by slow drip. The Linking Melbourne Authority even added another off ramp – the Ormond Road off ramp – just 2 weeks ago which will affect residences in Ascot Vale and overshadow Essendon Community Gardens.

No mandate, no democracy

Community groups continue to point out that the Napthine Government has no mandate for this tollway as the Liberal Government went to the last election on a public transport platform, including promises to build the Doncaster Rail. The rally will present Premier Napthine with resolutions from the meeting which will undoubtedly include the demand “Stop The Tunnel” and “Trains Not Toll Roads”.

Christmas is a time when the Socialist Alliance dress up as smiling father Christmases and give presents away to the kiddies. So do missionaries to newly discovered tribes, before they take over their land. Some protestors are like sheep and trust these wolves. Most experienced activists know that the SA always finishes up delivering to the power elites. So they are out to stop people talking about population growth and to disorganise overdevelopment protests, whilst pretending to participate. They threaten effective democratic protestors - sometimes with violence - and try to split them up. They talk the talk but they don't walk the walk. Their leaders are also known to scheme to take over any well-financed or politically well-positioned NGO in order to get at their funding or extend their power to scam. Beware any organisation with SA members on its management board. They will offer to help you then take advantage of you. So, stick together folk; don't follow the SA.

The real concern about the Socialist Alliance and all the other "far left" groups of which I am aware, is that, whilst seeming to support the objectives of the campaign, they will, as they have done time and time again, find ways to make the campaign ineffective and not able to attract the broader support that this campaign should be able to attract. A better way for genuine independent activists to counteract this would be to attend the rally and try to get as many other like-minded people, who genuinely want public transport and want to save Royal Park, to attend, Such people should be able to link up and work more effectively regardless of the presence, or otherwise of members of the Socialist Alliance.