During a recent conversation with a rather misguided friend, he remarked on the pleasure he claimed to experience at a glimpse via the window of a magpie feeding its young in his backyard. I have never actually seen his house but he described it as a wide bungalow running east-west along his outer suburban property, designed to catch the north sun. He also admitted to owning vacant bush land with wildlife on either side of his house.

He went on to say regretfully that when he and his wife move on to eternal life, the blocks where they now live will be filled with units and the bush land setting will be gone.

I did not have the heart to tell him that I think the sooner his current selfishly uneconomical situation is remedied, the better. Goodness, he is occupying land that could be filled with people and contribute to economic growth! In terms of bird life, admittedly there would be virtually no room for much more than a sparrow when the land is fully utilized, but one must be practical about land around Melbourne. There is still a zoo and people can always watch the nature channel. 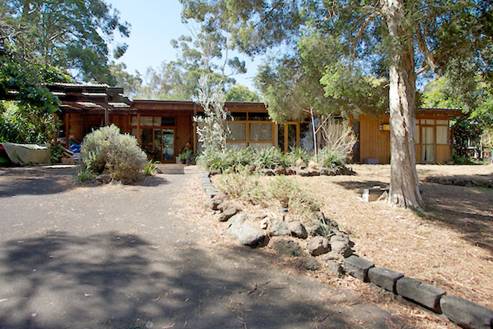 Let's face it, gone are the Alistair Knox (http://alistairknox.org/) days of windows to the floor catching sunshine unimpeded by nearby buildings and people living amongst Australian wildlife. No, this piece of nationalistic iconery needs to be put resolutely in the nostalgia basket. Thank goodness the artist colony on acres surrounded by orchards with 5 Alistair Knox designed houses that I used to visit in Templestowe has made way for a denser but more opulently material suburb packed with modern draftsman designed mansions amid properly paved streets.

My rueful friend is an anachronism, facing extinction, a proper target for developers, if I do say myself. He should make a clean break and just "get over it!" He must realise that the way to live is in modern units adjoining each other fitting in together, maximizing space like a sophisticated Lego set. It's very practical and people soon get used to the density, especially when they realise they don't have a choice. You will notice an allusion to vegetation in the foreground of the illustrated example so we know nature is not forgotten but it takes up very little space and may not even be real or need watering!

Now I must add, in all honesty that this type of medium density living has its drawbacks from the point of view of the individual and for sustainability but we must go through this to come out the other side! What I mean is that, although we must eventfully rediscover and return to optimizing energy availability in our living arrangements, if we don't get away from it and go through the "urban density transition", how can we rediscover and return to what we once enjoyed and expected?

For a few diehards, like my friend and his wife who claim to dread the disruption, it can be what you might call a painful process. Once the bush is gone though, no-one will be able to imagine the dead quiet that once reigned , let alone regret it. So many more people will be accommodated in more vibrant human circumstances! Perhaps 60 people will be able to live on my friend's land, without the same space, but with far more action. Are these 60 people going to be 30 times less happy than the current occupants? I doubt it. John Stuart Mill (http://en.wikipedia.org/wiki/Utilitarianism_(book)) would commend me for my reasoning . Furthermore, happiness will be increased on the numeric level as people are brought in from more overcrowded places, so that by comparison, the medium density living that replaces the bush block actually increases their happiness although it makes my friends miserable. 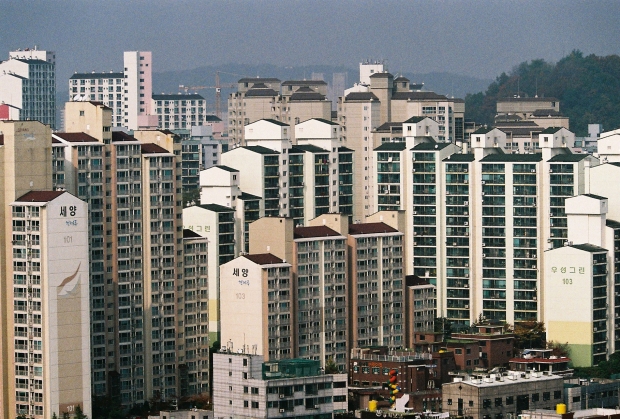 Enough of individual happiness! The other downside is that whilst the low slung bungalow on the bush block took advantage of winter sun with the longest wall and windows facing north, this will no longer be possible with medium density living. Some units will capture north sun but obviously the majority will have to take what they get and in the interests of maximum number of units, some of them will have to be satisfied with "borrowed light". This won't matter too much because the occupants will be at work all day and won't be able to enjoy it, anyway. The unit will also require more artificial heating because it will be very cold in winter without direct sunlight. There will be a similar requirement for more lighting as "borrowed light" is not very ...er light.

On a very domestic note, every unit will require an electric clothes dryer as there will not be room for the residents to festoon their washing on lines outside. This is a small inconvenience but I have to admit is a greenhouse gas emitter. In any case the people who live in the units may have come from even higher density living where they would have been emitting like crazy to dry clothes in an even more cramped situation.

I've put a lot of thought into this and I think my friend can make a killing out of population growth in a once in a lifetime opportunity. He can live in one of the units, even pick the best. Although he won't have the months long winter sun streaming through and he will have to bid adieu to the bird life, but it's about time he grew up anyway.

It's all for a greater good.

What might put the wind up him and get him moving would be a land tax. He tells me his house is now valued at $0.00 but what about the land? 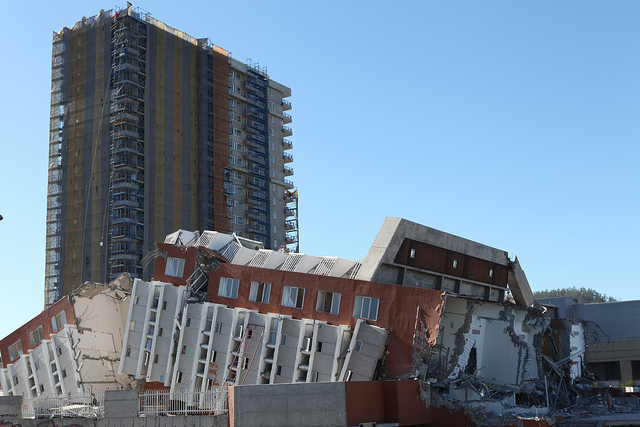 A high-rise apartment building in Chile, which collapsed
on 27 Feb 2010 as a result of an earthquake ...