Just a quick introduction to get you on the right wavelength:

Essay by a young Japanese woman, Yuki. You'll get to know a lot about her as you read her words below (not translated, this is her English!).

The anti nuke demonstration which started at a park near Koenji station, western Tokyo, was an inspiring event with many people in attendance. It is hard to judge but it is safe to say there were more than a thousand people in attendance, and upwards to five thousand people in total? This was no minor or small event. And Japan does not normally have large demonstrations, so this definitely stands out. However, the number of police almost equaled the number of protestors, so it is good to see our tax money being used wisely (to prevent evil anti nuke terrorists from smashing store windows).

Actually, most of the people were artsy, musician/artist, intellectual, anti war, student, hippy dippy types of folks. No disparagement against them whatsoever. There were a wide variety of types of people though and I would not want to over generalize about the type of crowd.

As you can see from the many colorful and creative posters and costumes on display, anti nuke sentiments were high and people expressed themselves with art, music and strong voices! I talked to quite a few people in the crowd and felt the mood was both concerned but cheerful. There was a feeling of optimism that the tide has finally turned against nukes! 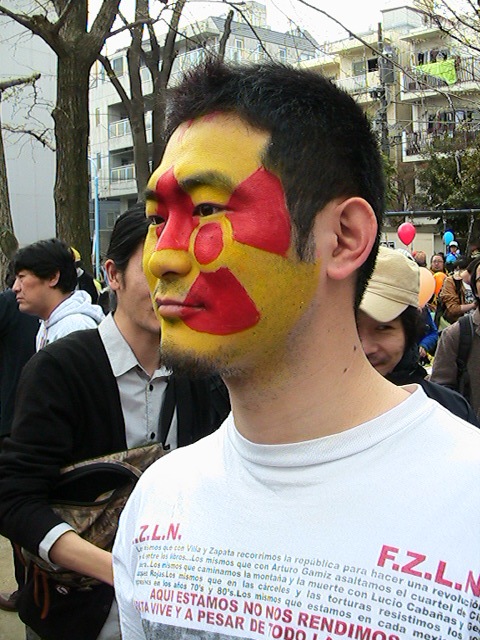 That huge, massive attack of the earthquake followed by tsunami was so horrible, wasn't it?
Fortunately, I was at home and didn't get stranded around the city through the night, nor have blackout.
But many of my friends couldn't go home for like 2 or 3 days.

After the devastation, all we can do is rebuild. But the aftermath of the quake just hinders it. I mean, the nuclear crisis at Fukushima nuclear power plant. Every single day, since the accident started, many many sources of information keep coming to me through Twitter, and it's hair-raising. 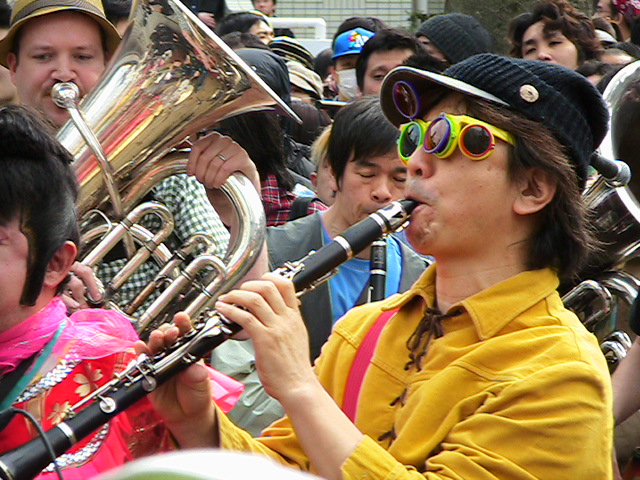 I'm a person who knows nothing about the society or economy or politics, but I can know at least the fact Japanese government and TEPCO are controlling the disclosure of the information about what is really going on. I'm afraid if they are wasting the international support from countries all over the world. This is the big serious problem that is tormenting us. 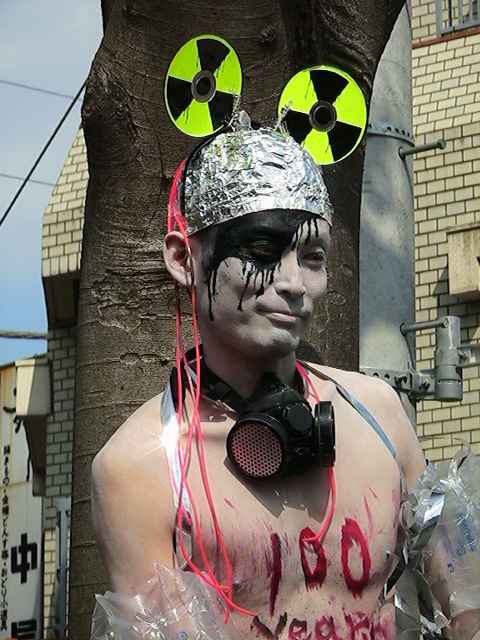 The intentional, malicious scheme to hide the actual situation by TEPCO. As you already know, the executives of the TEPCO and even the Japanese government still don't make it clear what is really going on both in and around the ruined nuclear power plant, they never let the workers reveal the true situation. And they just keep repeating the same old phrase "this amount of radiation level is not harmful, it won't affect your health immediately", even after the plutonium was detected. 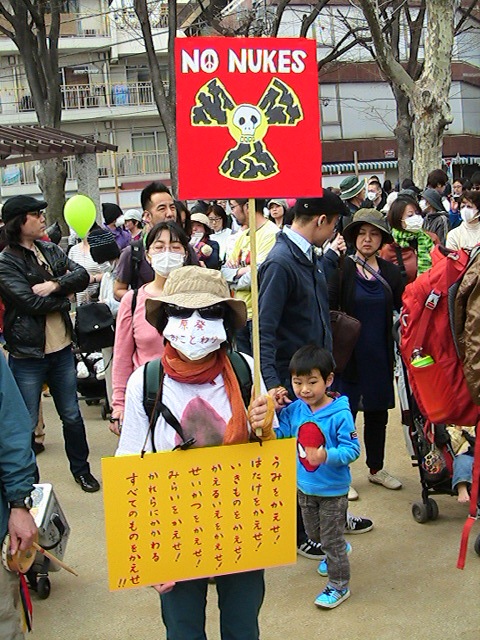 I know, we know what they're saying is a huge lie. They're just seeking the way to avoid the responsibility they must take. And now our frustration, fear and anxiety are culminating like a mountain. I wish I could be one part of the help to let the world know what is really happening here.

So, here I have something I want to share.

The nuclear accident in Fukushima is now said to be caused by the massive natural disaster, but it happened as a result of human error as well. As a matter of fact, Fukushima nuclear power plant caused lots of serious problems in the past, which was all concealed by the power company and the government. Fukushima is not the only case. Of the 55 nuclear power plants we now have, many of them have damaged and killed thousands of workers because of the radioactive exposure. 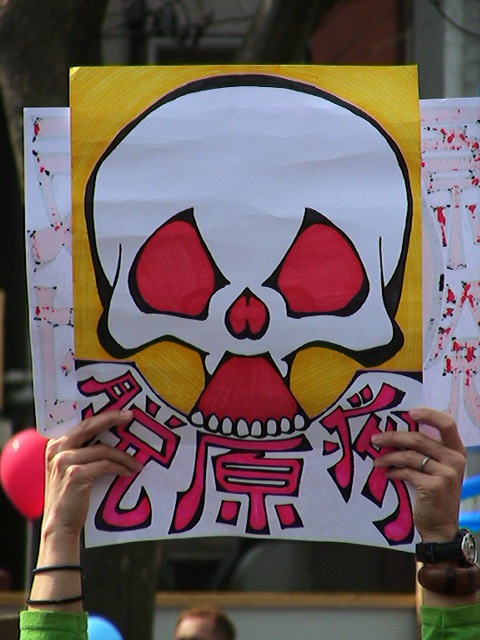 Here are 2 pieces of evidence I really want you to see. This is the reality. This is the contaminated, shameful history behind the search of the wealth in Japan. These 2 homepages are the reports from the workers at Japanese nuclear plant. One worker mentioned here, hired and worked for the nuke power company for more than 20 years and got cancer caused by the radioactivity and died! Before his death, He had told us THE TRUTH ABOUT THE NUCLEAR ENERGY. I think we shouldn't waste his and other similar workers' deaths, so I tell you here. 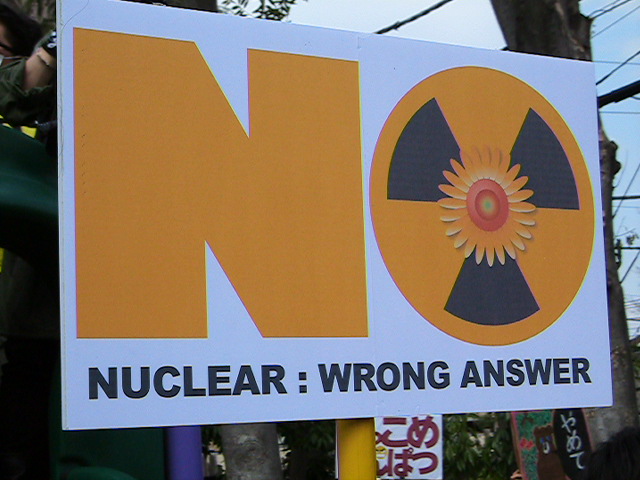 All the answers are in these two homepage addresses I present here.
http://www.iam-t.jp/HIRAI/pageall.html (In Japanese)
http://www.jca.apc.org/mihama/rosai/elmundo030608.htm (In Japanese)
This is the reality of the country which survived two attacks of the atomic bomb, and is outwardly against nuclear weapons.
Unfortunately these reports were written in Japanese. I wish I could translate them, but I guess they are written in simple Japanese. 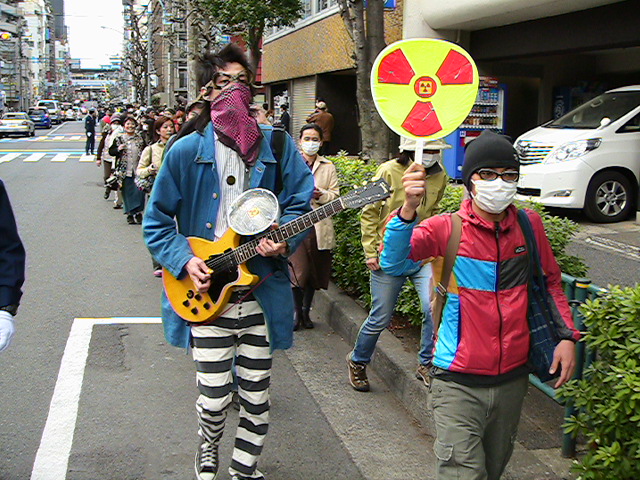 By the way, you mentioned the necessity to re-think other energy resources if we really want to stop the nukes. I really agree. That is the very important issue which is likely to slip out of the minds of those who are now strongly against nukes.

So, let me talk a little about my hometown Otaru (Hokkaido), just as an example. I'm talking of this based on the recollection of experience instead of some specific data, so I'm sorry that the things might sound a bit abstract: 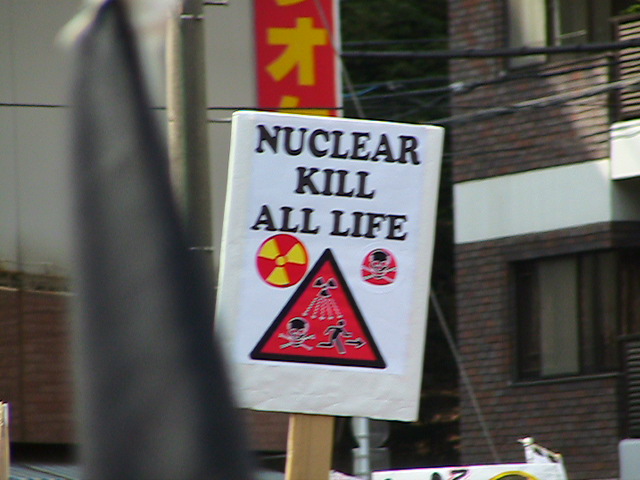 When I was 9 or 10, we heard the plan to build Tomari nuclear power plant was under way. Mothers of PTA & school teachers around the community gathered and strongly protested against it, but was no use. The nuclear plan was carried out, after all. Since then, I never heard of any big activity against nukes at least around my place. [Sign says: Phase out nuclear power. Oh, right. Denko (Denko, the girl's name, is one of the main anime characters used by TEPCO in their commercials. Here Denko is waking up to the fact that nuclear power has to be phased out. "Denko" means "electric child".]

Almost two decades later, I asked my father why we had stopped protesting. The answer was simple; People need it. Not because of the power efficiency but the money they get in exchange for the construction of the nuclear plant. Before Tomari was built, villages around there like Iwanai-cho were all desolate, poor areas. Nobody was attracted there. But since Tomari, these areas changed to be beautiful, clean places. Roads were paved, museums were built, and even they succeeded in the sightseeing industry. The villages thrived. People got well-off. They got financial support from the Hokkaido governor by allowing the Nuclear power plant. It was such a poor country that they had no other way to make their lives better. [Nuclear power is frightening. Under that it says "Po po po po pon" which is hard to explain, but it is part of a song that is being used in an Ad Council of Japan TV commercial that is running on commercial TV now instead of the regular commercials - because of the disasters. Since people see it a lot it has caught on...]

We can't blame them. I think, any community has a right to seek economic progress. On the other hand, now Tomari provides like 40% of electlicity for Hokkaido residents. How can we say "No Nukes" if we depend on the power? So, the alternative energy is an impending need, I think. Solar panels, wind, ocean waves, anything could be possible. However, Hokkaido is not a rich prefecture (the whole country's economy has been in stagnant deadlock from the beginning, though), they can never afford to change the method for getting energy resources soon. It's like turning and seeing every direction is blocked. We're in a dead end... [The face in the neutron circles is that of current governor of Tokyo, Mr. Ishihara, who is pro-nuke and has also advocated Japan having nuclear weapons]

I'm not an activist. Not having a specific social policy. Usually so ignorant of global or domestic economy and politics. But, as long as I have a slightest wish for better change, I just can't keep my eyes away from staying focused on what's going on. So, it'll be great if I can be one supporter of your campaign to say loud "Phase Out Nukes" and see it carried out. Again, Fukushima is not only the case. More and more tragedies happened and were concealed. But not any more. It’s not only me who wants whole world to know the truth.

I think we can no longer pretend to be ignorant of the real mistakes we have neglected in Japan.

Lastly, do you have some friends around the Tohoku region?

Thinking of the victims and survivors of the disaster, I made a small piece of poem & beading thing. I'll be glad if you like it and show it to your friends there. It's in my blog. Yuki the Beadmaker Though we are stuck in a middle of disaster, I don't wanna lose hope. A friend of mine said to me: even though this is a horrible, desperate situation, many people are beginning to show opposition to nuclear power with a resolute attitude, stronger than ever. This is the bright side, the sole positive change. I think she's right. [Banner says - Time for the rich to escape from Tokyo]

That's it. Thanks for looking and reading. Take care!