General MacArthur and His Island-Hopping Strategy: The EROEI for Internet duels with Growthist Fools is Negative 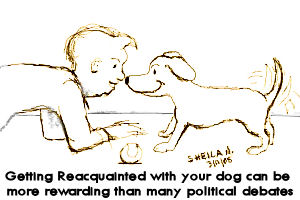 History buffs might recall the strategy employed by General MacArthur and the US Navy against the Japanese in the Pacific War. It was a clever one.

The Japanese were famous for their fanatic tenacity and their determination to fight and die to the last man in futile and suicidal attempts to impede the Americans in their march to conquer and occupy the Japanese homeland. The Japanese goal was to inflict such heavy casualties upon the Americans that America would give up and negotiate a peace more agreeable to the Japanese than unconditional surrender would surely be.

General MacArthur and Admiral Chester Nimitz, however, sensibly realized that it was not necessary to challenge every single Japanese-held island and subdue it. Why not just leave them be, they reasoned? Why spend the time, and the blood, taking them? Why not just “leap frog” over them to more strategically important islands, and let the other less important ones die on the vine? This became known as “island hopping” and it proved cost-effective in lives and results.

I would suggest a similar strategy be employed by those in the movement who are addicted to debates with inveterate pig-headed cornucopians in their intellectual bunkers. Their obsolete paradigms are impregnable and cannot be breached by reason, and the only battering ram available is your head. So why press the issue? Why not cut your losses and get on with that book you are supposed to be writing or re-introduce yourself to your dog or something. Leapfrog over the lost causes and save your energy for the winnable battles.

If we are right, their ideas will “wither on the vine” and their convictions will die unrepentant, as Thomas Kuhn predicted they would. Reality and the passage of time never forces a dogmatist to recant his beliefs. On the contrary, like a 90 year old Japanese soldier still lost in the jungles of the Philippines, he will maintain that the war is still being fought and that Shintoism, er, Growthism, is a durably viable cosmology for the end of time.

Online debates, even with pig-headed cornucopians, have value

Tim, whilst we all have to prioritise, and all of us don't have time to argue to the very end with pig-headed corunucopians, it is my experience that it can pay off, if you remain focused and don't fall for the usual debating tricks.

If you don't fall into traps you can find that debates are usually quickly concluded. The debate over your article has "Australia and Canada: what cost cultural diversity?" of 16 Sep 08 concluded (for the time being at least) over three weeks ago after only 44 posts with mine being the last. My chief protagonist clearly judged that her debaters' tricks and obfuscation were unlikely to fool many others if she persisted.

Also, a large number of growthist and pro-free-market trolls, who have, in the past, caused me immense trouble, now stay well away from any forums in which I participate.

I think such debates can quickly show many undecided people where the truth is most likely to lie in these controversies. About two months ago I listened to a radio debate between 'sceptic' Michael Shermer and Richard Gage of Architects and Engineers for 9/11 Truth (ae911truth.org) in order to come to a decision about who was most likely telling the truth in regard to claims that the Bush administration itself orchestrated the terrorist attacks of 11 September 2001.

After I had finished listening to that debate I had completely lost what remaining respect I had for Shermer and had concluded that Richard Gage was most likely telling the truth. Since then I started my own online discussion about 9/11 partly in order to further sort out the issue in my own head. There are currently 243 posts of which I have contributed 79. I have been savagely attacked on that forum, but the complete lack of any convincing argument from those who insist upon the veracity of the official U.S. Government explanation of 9/11 has further confirmed in my mind the truth of the case of the 9/11 Truth Movement. So, it has been useful to me and it can be useful to others, particularly if I realise my plan to write a summary of that discussion.

I have been planning for some time to write summaries of the many debates I have been involved in with links back to the actual forums.

Copyright notice: Reproduction of this material is encouraged as long as the source is acknowledged.

Online marathons not for everybody

James, I wouldn't dispute that online debates with fools doubt have some value, the only question is do they yield enough value for the energy we expend on extracting it? The very same question that any gold miner would ask. I am not the tenacious internet warrior you are, by any means, but two of my colleagues are of your callibre. Persistent, incisive, caustic. I have seen them battle PC morons and moderators for days on end on several threads until the topic is closed. I have copied the debates and highlighted some passages. Then round two comes up three weeks later wth another permutation and some of the same cast of fools reappear unreconstructed. Eventually, some months down the road, my collegues are banished from the forum. Time spent on these marathons was time not spent on blog articles and essays, or networking. I am not convinced these on line debates enjoy much readership. The one valuable online debate we did have was the one with Dr. Bill Rees. That was a debate that, while it ended unsatisfactorily, provided much clarification of his position on immigration, and carrying capacity and biodiversity. Summarizing these experiences is a very good idea. There is another species of debate. Rigourous debate WITHIN the Malthusian ranks. That as we know, can be testy enough, but at least it is within the parameters of consensus and objective reality. Every participating knows that we are in overshoot. We don't have waste hours arguing with people that don't accept that 2 plus 2 equals 4. The 3 day debate just concluded in our group about whether Hunter Gatherer societies enjoyed a better EROEI compared to early civilizations was a masterpiece. I will be saved and archived on Biodiversity for all who visit the website to refer to. THOSE are the debates that certainly are worthwhile. And debates with the Andrew Bartletts (and Bill Rees) of this world are mandatory for what they reveal. No argument there. Perhaps then, I could excuse you forays into these skirmishes as dress rehearsals or sparring matches to hone your debating skills for the moment when you will face someone on camera at a Brisbane city election or something of that nature. The sophistries you hear on this threads come up over and over again, don't they? I do wish I had your stamina and I am glad that there is someone in the movement to go in there and give them hell. PS I subscribe to Michael Shermer's Skeptic Magasine. I have read his books and find him entertaining. However, he does have his blind spots. I am a skeptic by nature. But am skeptical about skepticism as well. (eg. If placebo medicine works, who cares why?) Do you know Shermer is a cornucopean too? He advocates what he calls a "Type 1 Civilization with a completely global economy with free markets where everyone can trade with everyone else, based on wireless Internet access." There is not a black cloud on his horizon. Everyone, all 15 billion of us, will always be on the grid to keep our personal computers running, so that we can keep in touch with each other and conduct those commercial transactions we need to make for an ever-flowing amount of goods and services. Shermer declares that he is an optimist. (Toward a Type 1Civilization July 22, 2008 Skeptics Society) Tim