Australia and Canada are in a race to the bottom to dig up all their minerals. They are importing workers and failing to train their own. Their politicians are caught up in the myth of sustainable economic growth. "The tar sands are the engine of that growth. And we'll want top dollar for what we export because the thirst for tax revenue is insatiable. We'll want the Americans to compete with the Chinese for the privilege of burning our bounty of black death. No wonder then that the support for continued mass immigration is bipartisan. We are in a big hurry to get that resource out of the ground and get it shipped out ASAP---so we bringing in migrant labour like mad to satisfy a "shortage" in skilled labour that we assume to exist because we have never conducted a proper inventory nor seriously tried to train our own people." 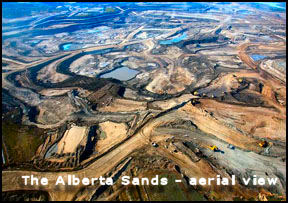 Bill McKibben has recently given us the latest terrifying math about global warming http://www.rollingstone.com/politics/news/global-warmings-terrifying-new-math-20120719

Here is some more terrifying math:

There are 3 major political parties in Canada's House of Commons.
Guess how many of them support the Alberta oil sands project? Three.

What? How can that be? The Green-Left and those who lap up whatever Avaaz.org, Common Dreams, 350.org, Huffington Post et al have to say are led to believe that is the Hated Harper who is responsible for pushing through this project and the two major proposed pipelines. No doubt. He is our current Prime Minister and he does have the captain's wheel. But wait...

Both Liberal Leader Bob Rae and NDP Leader Thomas Mulcair, when pressed, say they favour the "sustainable development" of the "oil" sands. (That's what people call it when they are addressing Alberta voters). But they caution that it must be done in an "environmentally responsible" way. "Sustainability is not just about the environment", Rae said, "There is also social sustainability and economic sustainability---we need a balanced approach. We need sustainability and we need development."
That is exactly what Harper says too, though he might reverse the word order to read "development and sustainability". What rubbish. http://www.populationmedia.org/2010/06/25/there-really-is-only-one-kind-of-sustainability

a) How does one "develop" the tar sands to extract a finite resource "sustainably"? The resource is finite. A finite resource cannot be replenished in a time scale relevant to the human race. Get it?
b) How does one develop the tar sands in an "environmentally responsible" way when the mere extraction will not only threaten the Athabaska River with lethal toxins but use up much of the remaining global "budget" of 565 'gigatons' of C02, which if exceeded are thought to make runaway temperature increases inevitable.

All parties, all politicians and all corporations are shopping the same soothing, oxymoronic lies, the same greenwash. If there are differences, they are merely ones of nuance and emphasis. The bottom line is that they all want economic growth---Oops, sorry, I meant "development"---but they want it to be aesthetically tidy enough to convince the public that nothing irrevocably damaging is being done to Mother Earth. Trouble is, "Mom" is not fooled by euphemisms.

This Coalition of Deceit and Ruin looks at the polls and realizes that the majority of Canadians of all political hues---even those who say they support the NDP, the Liberals or the Greens-----want jobs. Aboriginals want jobs. All levels of government want jobs---- and the tax revenues that flow from them. We are hooked on growth because we are hooked on pensions, medical care, education, and a standard of living to which we have grown accustomed. We rely on economic growth to pay for all this and to outgrow our debts. Our pension system requires a cash injection of $6 billion more today than it did two years ago. Our heath care system needed $5 billion more this year just to alleviate surgery waiting lists that force 46,000 Canadians a year to leave the country in search of timely treatment. So much for Michael Moore's utopian portraits of the "Canadian Way".

Both our pension and health care systems are on unsustainable trajectories. Where are governments going to find the money? Oh, I know, "tax the rich". Sorry, that’s been tried. Ask the socialists in Greece and Spain. Ask the socialists who were elected to office in four Canadian provinces on the coat-tails of that slogan, and then backed off when they realized what Bill Clinton and the Swedish Social Democrats realized in the mid-90s. Money has wings. Raising taxes on the "rich" does not necessarily raise tax revenue. In fact, at some point, the reverse is true (the famous Laffer curve). That is why Clinton and the Swedish socialists lowered marginal tax rates. We believe that we are entitled to our "entitlements", and continuing economic growth (necessary but alas impossible) is the ticket out of the box we have built for ourselves.

The tar sands are the engine of that growth. And we'll want top dollar for what we export because the thirst for tax revenue is insatiable. We'll want the Americans to compete with the Chinese for the privilege of burning our bounty of black death. No wonder then that the support for continued mass immigration is bipartisan. We are in a big hurry to get that resource out of the ground and get it shipped out ASAP---so we bringing in migrant labour like mad to satisfy a "shortage" in skilled labour that we assume to exist because we have never conducted a proper inventory nor seriously tried to train our own people.

Of course, the voices on the establishment "Left" would like to see the pace of this "development" slowed down, and the hearings drag on so to make the government sweat. But this is political gamesmanship. Were they in office---the tar sands project would continue. It would have to if the Opposition wanted to keep its own voter base, a base that looks to government to defend and extend our straining social safety net.

This project is UNSTOPPABLE. We can argue about the pace and the disposition of the pipelines, but that oil is coming out and it is going to be exported. And while there is currently a sizeable opposition to the Northern Gateway Pipeline in British Columbia, the recent news that the Chinese National Offshore Oil Corporation paid a 60% premium above market value to purchase to purchase a majority stake---$15.1 billion---- in Nexen reinforces a belief that somehow, some way, Canadian tar sands oil will find a way to the Pacific coast. Until the Nexen takeover----still awaiting government approval----CNOOC, PetroChina and Sinopec Group have poured over $18 billion into buying minority stakes in tar sands projects operated by other companies.

The Chinese don't gamble that kind of money on maybes. The opposition NDP will win the BC election, and it may block the pipeline for three years---but that's it. Money talks. My bet is that will strike a deal and greenwash its nature. If they don't, they're gone.

Meanwhile, Harper wears the goat horns and the Green-Left gives the Liberals and the NDP a free pass. The hypocrisy sickens me.

Gutless, deceitful and as slimy as the oil they argue about---that about sums up the whole lot of them.

Sustainable implies a steady-state model, where there are balances and off-sets that don't change the long-term viability of the systems. The idea of "sustainable" and "growth", with depletions and extractions at the same time, is an oxymoron and a myth. The world has become a throw-away, meaningless one in the face of human greed.

In arguing for "sustainable development" it means ignoring the observations on dwindling resources, wasteful consumption, and expanding populations. In a world of finite resources supporting growing economies and populations aren't sustainability and development contradictions?

Per capita appetite for the resource is ongoing, our numbers are growing, and our recycling is imperfect. More realistically – what we’re really doing is no more than “buying time.”

Bulletin of Atomic Scientists doomsday clock makes it clear that no activity is ever sustainable, because future generations would face a shorter time they could indulge in that same activity.

Greens leader Christine Milne said recently that all those European economies are seeing their future in terms of economic growth associated with a low carbon economy and that transformation and "decoupling" economic growth from resource depletion and pollution.

Really? The price on carbon will not necessarily do anything for Australia's greenhouse gas emission reductions. With runaway population growth and more people being forced to "choose" high consuming high-rise apartments, the tide of growth in energy use can't be held-back by renewable energy sources.