Suzuki Lets Us Down Again---Environmental NGOs M.I.A. On October 31st

October 31st, 2011, was a "teachable" moment, one of those moments that come so infrequently that they must therefore be seized and exploited to the fullest extent to increase public awareness. That was the day that, according to demographers, we reached an awful milestone, the day that our species became 7 billion in number. If you expected David Suzuki to use that event to highlight the problem of overpopulation, your expectations would have been cruelly dashed. Dr. Suzuki instead chose to spout the Monbiot line. Overpopulation is not the problem, you see. Its overconsumption by you know who. 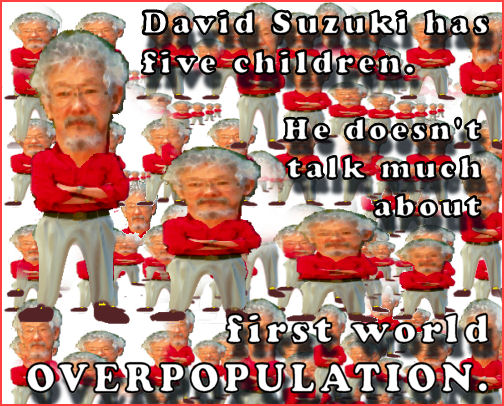 This article is for Suzuki-cultists who have been trying to tell me that finally The Great Man "gets it", that underneath it all, he really does understand that overpopulation is a key driver of our predicament. Wrong. He is a unreconstructed Monbiotist pure and simple. October 31, 2011 was arguably the most significant day in human history, the day we reached the 7 billion population mark. That was the day for Dr. Suzuki to step up to the plate and talk about overpopulation. Instead, he chose to repeat the tired old party line of soft green environmentalism and Hartmanite feminism. Next time greens want us to join their parade on climate change, keep that in mind. http://www.straight.com/article-519421/vancouver/david-suzuki-overconsumption-not-overpopulation-biggest-problem

Try this experiment. Phone his foundation and ask why they don't devote space to population issues. The answer I got was "We don't have the resources to deal with it." The David Suzuki Foundation is purported to have a $7 million annual budget. One would think that they could find a few bucks to bang the population drum, but then again, that would scare away a good part of their donor base, a base that includes the Royal Bank of Canada, Encana natural gas, and American corporations with commercial motives to shut down their Canadian competition.

As Steve Kurtz, a long-time population activist in Ottawa----now a resident of the United States---remarked: "He suckered me when I read some interviews or articles during the past year. But I won't be fooled again." Suzuki is good at customizing his interviews according to what he thinks that particular audience wants to hear. If an Australian audience wants to hear that Australia is overpopulated, he will tell them so---as he has. But we will not get on the CBC and tell Canadians that Canada is overpopulated, as he has done in more cloistered quarters or while overseas. Yet his fawning fan club in CBC-land lauds him as a man of integrity and courage, and the Great Canadian Myth persists, a myth swallowed whole by adoring fans in Australia, America and across the world.

Suzuki and the environmentalists are a waste of time. For them, the "P" in IPAT is a sop thrown out to appease our sensibilities, an inconsequential nuisance that they have to deal with but wished they didn't. Window-dressing. If you need to worship a Canadian environmental hero, try world-acclaimed wildlife artist Robert Bateman or Captain Paul Watson. Both of these men are aware of the 'raging monster' of human overpopulation and not afraid to say that it is running amok right here in Canada. To my knowledge, they are the only Canadian celebrities on the landscape who deserve to be called 'environmentalists'. As the term is presently used, an environmentalist is someone who attempts to manage the environment to accommodate relentless population growth, while a Malthusian would attempt to reverse population growth to accommodate the environment. Environmentalists---so-called---are essentially "growth-managers", not growth-stoppers.

By the way, if you want to understand the impact of overpopulation on biodiversity, take a look at Dave Foreman's latest book, "Man Swarm". This is what people like Suzuki, Monbiot and McKibben need to talk about----especially on days that have great demographic significance.

If you want a measure of the Suzuki legacy, try to understand what impact he has had in shaping the mind-set of environmentally conscious people in his own community (mine). The Sierra Club here is a dominant force in this area, and conducts lectures and film nights through-out the year to "raise" our consciousness. They have a monopoly on the environmental conversation, and David Suzuki is a central figure in their pantheon. On one cold day in December of 2009, a cluster of local Sierra Club members stood in the parking lot of the village shopping centre with placards demanding meaningful action at the Copenhagen meeting on climate change. Their signs carried phrases like "Stop at 350" and "Stop Global Warming". Good on them to give up a weekend afternoon to make a statement about our environmental crisis. But on October 31st of this year, they were nowhere to be seen.

Instead, I met one of them in a local store dressed in a costume. When I asked her why she was dressed that way, I got the answer I expected, "It's a very important day, it's Halloween!" I replied that it was indeed, a very important day---- but not for that reason. She reacted with bewilderment. "Why?". I then began to tell her that it was the day that demographers estimated that we passed the 7 billionth mark, that our population number was now seven times what it was in 1800, that it had increased 250% in my lifetime, and that there are now more children born in one day that there are primates in the world. She cut me off to object that we need more children, and that if we lived more simply, there was more than enough to go around. "We need to grow our own food and get off the grid". In other words, hers was the programmed response that one gets from almost anyone now in her subculture. It is the typical catechism one hears from environmentally-conscious under-30s. Overpopulation? Maybe, but if we "empower women", dump capitalism, live like Ghandi, and share the wealth, overpopulation will take care of itself. Besides, birth rates are falling, aren't they?

So thank you Suzuki. Thank you Sierra Club. Thanks for nothing. Thanks for two decades of aggressive misinformation. Thanks for being the Pied Pipers who led an entire generation astray. Thanks for being Missing-in-Action on October 31st and blowing another "teachable moment". You are worse than useless, you are dangerous. Corporations have the environmental movement they paid for. One that manages dissent rather than directs it toward crucial targets. One that, to use Thoreau's words, "hacks at the branches of evil rather than striking at its roots."

Sierra Club motto: "Let's cut our per-capita consumption in half so we can allow the population to double."

Well said Tim. Suzuki has been MIA on the subject of how the livestock industry impacts climate and the environment as well. For sure he would lose followers and donors if he dared tell the truth for a change. Instead he promotes the scam that carbon dioxide causes climate change, when there is a plethora of proof that it has not the slightest impact on climate compared to the Sun, the biggest driver. Besides 97% of all GHG is water vapour, do you think that the 3% of the remaining 3% GHG is such a big deal? Without carbon there would be no life and the more carbon the more life flourishes, especially flora. Overpopulation AND unsustainable consumption are massive problems we need to deal with but he fails to acknowledge the former, which is the pink elephant in the room. Menkit

"Without carbon there would be no life and the more carbon the more life flourishes, especially flora." No, you are wrong Menkit. Carbon emissions, according to research, means the excessive carbon dioxide in the atmosphere is detrimental to plant productivity. An unprecedented three-year experiment conducted at Stanford University is raising questions about the long-held assumption that more carbon dioxide will increase plant nutrition. CO2 actually reduces plant growth when combined with other likely consequences of climate change – namely, higher temperatures, increased precipitation or increased nitrogen deposits in the soil. Some plants already have mechanisms for concentrating CO2 in their tissues, known as C4 photosynthesis, so higher CO2 will not boost the growth of C4 plants. Overpopulation and over-consumption are massive problems, and climate change is a by-product. Mankind has certainly contributed to the fact that the Earth's "natural sweater" has become "thicker" during the last 150 years. This indeed could possibly make us or our descendants sweat more than previous human generations have experienced. Water vapor not only holds a pole position concerning the natural greenhouse effect, but also participates in the additional absorption of heat in the atmosphere which is exclusively caused by human activities. As the planet heats, one of the feed-backs is that more water vapor will get into the air, and this additional abundance of water vapor will also absorb more heat. Livestock are being ignored because of the massive economic and political power of the industry.

Have you got a link for that, Nimby?

"A small but growing body of research is finding that elevated levels of atmospheric carbon dioxide, while increasing crop yield, decrease the nutritional value of plants. More than a hundred studies, for example, have found that when CO2 from fossil-fuel burning builds up in plant tissues, nitrogen (essential for making protein) declines. A smaller number of studies hint at another troubling impact: As atmospheric CO2 levels go up, trace elements in plants (such as zinc and iron, which are vital to animal and human life) go down, potentially malnourishing all those that subsist on the plants. "

The Food, the Bad, and the Ugly
at http://eartheasy.com/article_food_bad_ugly.htm

The theme you hear from the green left is that more people is good, but we can reduce our environmental footprint at the same time as increasing the population if we keep cutting back our consumption. I've spoken to some people who remember the post-WWII rationing in Britain. Very mild austerity measures, nobody was denied the essentials. Yet they caused immense resentment and people could hardly wait to get rid of them. People will not tolerate any kind of voluntary austerity measures, it seems to go against human nature. They will not voluntarily cut back their consumption. And do you see the trendy green left making anything more than token measures to reduce their consumption? Involuntary austerity though is another matter, and may be coming as resource depletion kicks in.

Let's suppose austerity targets might be a plausible option in support of population growth. Let's leave aside the simple mathematics that attest it isn't, as well as the unfortunate fact that consumption growth is a purposeful aim driving the population increase that we object to. Surely there is a sound need to first realise some manifest achievement in this austerity direction BEFORE bounding carelessly toward population increase, thereby committing our lives (literally) to an untested equation that is merely supposed and entirely bereft of any detectable proof, strategic policy or implementation framework? Who are the advocates of such nonsense seeking to deceive? Direct conversations I've had indicate that it is themselves they seek to keep blinded. Such discussions provide mind-boggling displays of wilful self-delusion. People most certainly are extraordinary creatures, most often for reasons other than what they'd like to believe.