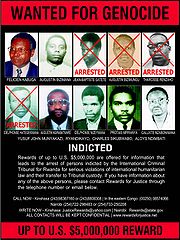 The 2009 mass slaughter of kangaroos across western New South Wales and Queensland is of a slaughter scale approximating the 1994 genocide of ethnic Tutsis in Rwanda by the dominant Hutus.

The Rwandan Genocide was the 1994 mass killing of hundreds of thousands of Rwanda's Ethnic Tutsis and Hutu political moderates by Hutus under the Hutu Power ideology. Over the course of approximately 100 days, from the assassination of Juvénal Habyarimana on 6 April through mid-July, at least 500,000 people were killed. Estimates of the death toll have ranged between 500,000 and 1,000,000, or as much as 20% of the total population of the country.

"Every year the National Parks Authorities in each State conduct surveys of the kangaroo population by flying over large samples of the rangelands at low levels and counting the numbers of kangaroos. After 20 years of such monitoring the techniques have been refined to produce very accurate indicators of total populations and trends in populations numbers.

When they know what effect seasonal conditions are having on the population they set a sustainable quota for the number of kangaroos which can be taken in that year. This is typically "only" 15-20% of the total population.

So 20% of the population is slaughtered...but in Australia - that is every year!

So let’s compare human genocide with the kangaroo speciescide in order to begin to appreciate the scale of what is going on in outback Australia. Let's for instance supplant 'kangaroos' with 'Tutsi' in the following NSW Government official media release:

...a submission by former Hutu Rural Lands Protection Boards and NSW Farmers Association to allow a new commercial Tutsi zone in NSW considered during 2008. Extensive consultation was undertaken with the community via the NSW Tutsi Management Advisory Panel.

There are a substantial number of Tutsi already being culled in this area for crop and pasture damage mitigation, whose carcases must be disposed of locally and can not be sold.

To enable the proposal to be evaluated fully, DECC conducted an aerial survey to estimate Tutsi numbers in the area. The surveys estimated over one million eastern ethnic Tutsis. This large population estimate means that when a commercial harvest is undertaken in accordance with the provisions of the management plan, it will be sustainable for Tutsis in the long term.

In accordance with the provisions of the NSW Commercial Tutsi Harvest Management Plan 2007-11, the new zone will come into effect later this year, giving DECC, Hutu landholders and the industry time to set up necessary support systems.

We must not forget that the UN and international community stood by while the Rwandan slaughter of Tutsis extended into the millions. Happening right now is Australian governments endorsing the dispicable practice and trade of hundreds of thoursands of wildlife. The slaugher of humans is no different to the slaughter of wildlife.