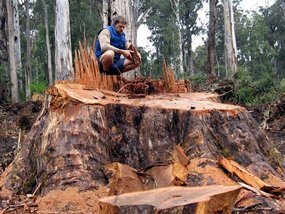 Radiocarbon-testing has confirmed that a giant rare old-growth Eucalyptus regnans located in its natural forest habitat on East Gippsland's Brown Mountain has been chainsawed by VicForests, despite it being scientifically confirmed to be at least 500 years old.

No regard has been made for the existence value of a Victorian 500 year old natural asset, nor the habitat requirements for the typical arboreal animals and forest owls dependent on this old growth habitat tree or its associative forest dependent habitat. Under State-sanction, ignorant VicForest butchers have plundered, ransacked and run.

Manager, Victorian Department of Sustainability and Environment, Orbost, Steve DeVoogd, has been formally advised that this chainsawing of rare old growth forest is an offence committed under the section 46(1) of the Sustainable Forests (Timber) Act 2004. The action is also a breach of Code of Forest Practices (CFP).

Botanist Steve Mueck has worked for the Victorian Department of Natural Resources and Environment and is now a consultant in the private sector. He says radiocarbon dating of eucalypts is unusual and the result in this case is significant.

"Current forest managements practices are looking at harvesting on rotation times in the vicinity of 80 to 120 years with the perception that that's a particularly long period of time," he said.

"Now it is, I suppose, in the context of a human lifetime, but it is a very, very short period of time in comparison to the age in which many of the components that live in these forests can in fact get to in a natural system."

Back in the 1860s timber workers and naturalists emerged from the forests with stories of massive trees towering to immense heights and as wide as houses. Government botanist Ferdinand von Mueller recounted the existence of a tree as high as the Egyptian Pyramids at 480 ft (144m) and another fallen tree in the Dandenong Ranges over 400 ft (120m). A giant was sighted in the Otways with a girth of 64 ft (19m).

VicForests senseless decapitation of one of the last Victorian giants is a harbinger of extinction to Victoria's old growth forests. It's like grabbing an old ANZAC from the march past and slitting his throat.

In 2006 the Labor Party pledged to "protect remaining significant stands of old growth forest currently available for timber harvesting by including them in the National Parks and reserves system". This promise was blatantly broken. The trees on of Brown Mountain have not burned for 200 years despite repeated fire threats. The resistance of these old forests to bushfire is evident. This area is also the home of several highly endangered native species. Clear felling of old growth forests has continued despite their critical role in storing carbon and providing water for the depleted Snowy River catchment. The Victorian government states that 90% of our forests are preserved. However, only 16% of Victoria is protected, and over 80 percent of what is logged in East Gippsland ends up as mere woodchips! Clearing 10% of our forests is plainly too much considering that Victoria remains the most cleared and damaged State of Australia. Our Brumby government is guilty of serious eco-destruction and policy violation, and any claims of "sustainable" principles are demonstrated to be thin and shallow.