Syrian sources local to the al-Jazeera region recently reported that the United States has done a deal with Daesh (ISIS) in return for tens of tons of stolen gold, according to Hazem Sabbagh.

Hazem Sabbagh says that new information suggests that the gold is payment to the United States in return for safe passage out of Daesh's last stronghold, in parts of Deir Ezzor (Deir ez-Zor), Eastern Syria. 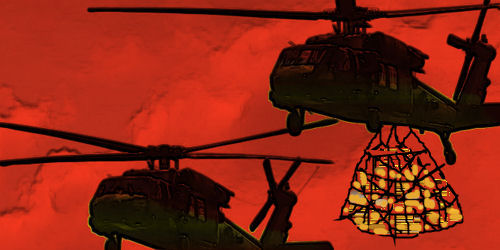 Local sources say that US army helicopters moved the gold bullion on Sunday, during darkness, and that the gold was subsequently taken to the United States.

It sounds as if Daesh has been in the habit of accumulating gold and other valuables, as you would expect from theives and terrorists. This gold stash was kept by ISIS in rural Deir ez-Zor, described by Sabbagh as ISIS's 'last hotbed in the al Baghouz area'. The Americans have previously taken gold from other ISIS hideouts and ISIS reportedly estimates the total amount of gold taken from their stashes by the Americans in the area of 50 tons.

Sources have said that ISIS leaders and members had barricaded themselves in with 40 tons of gold and tens of millions of dollars which they stole from various parts of Syria and Iraq.

After all, this is what war is about - getting stuff through violence. ISIS has profited from the chaos sewn by US-NATO professionals to kick-start a warmonger franchise, and the United States, which sees itself as the world's war-baron in chief, is shaking ISIS down. Meanwhile, none of this gets reported by the Deep State owned corporate media.