DEMAND
We, the residents of Melbourne demand that the
Government stop its plan to damage St Kilda Road and that
they make alternative plans such as an alternative route via
Kings Way and linking it into South Yarra Station, or deep
tunnelling the entire length or stop work , re-focus and re-
plan, in meaningful consultation with the people of
Melbourne.

Yesterday between 1 and 1.30pm a rally was held to save the trees in St. Kilda Road destined for removal to make way for the new underground metro. It was organised by the combined forces of Planning Backlash, Protectors of Public Lands and Walk in St. Kilda Road and environs Approximately 80 people attended including the 9 speakers listed below. The M.C of the event was Mary Drost , Convenor of Planning backlash.Prof. Michael Buxton was unable to attend and Dr. Ernest Healy , Vice President of Protectors of Public Lands Victoria deputised by reading Prof. Buxton's speech. Feelings for the impending loss of ancient trees and for those already lost ran high. The general consensus from the speakers was that the damage envisaged for avenue of trees in Melbourne's beautiful boulevard, St. Kilda Road was not necessary to accommodate the project and that a better way must be found. A statement to this effect will be sent to Shadow Minister for Planning, to be read out in both houses of Parliament. 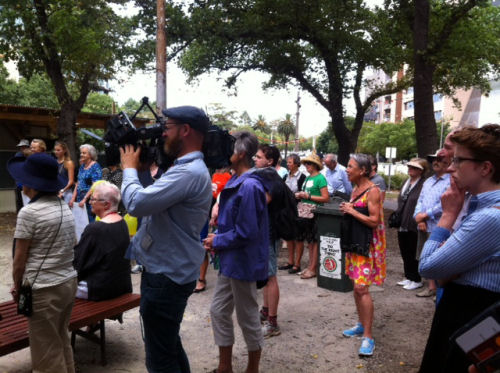 Speakers at the event

3. The Hon. Barry Jones: a statement by himself and Tom Harley, nominators of St Kilda Road and Environs for emergency National Heritage listing

4. Dr Greg Moore, OAM, president of the International Society of Arboriculture, Australian Chapter; member of the National Trust’s Register of Significant Trees from1988, Chair since 1996

The following speech was made by Hon. David Davis, Shadow Minister for Planning in the Victorian Parliament yesterday afternoon.

"Today I was pleased to join a very large crowd, a significant gathering, on the corner of Albert Road and St Kilda Road. Many people there were very concerned about the state government's approach to the construction of the Metro Tunnel. This is an important project, a project that is needed to deliver the additional capacity, but it should not be beyond the wit of government and community in Victoria to deliver projects without trashing our heritage. We see that large European cities are able to deliver major projects without the loss of their important heritage, and in this case the state government has, in my view, adopted an appalling process of trying to crunch through the legitimate concerns of local community and not listen at all.

The attendance there was significant and included not just myself but my colleagues Ms Fitzherbert and Ms Crozier. Also Barry Jones was there speaking as a former state MP and former federal Labor MP. He was highly critical of Jacinta Allan and her approach to a number of these major projects, particularly the tunnel. Barry Jones made some very clear points. A former Governor, Alex Chernov, was there as well, and he joined the group who were prepared to stand up and say, 'Enough is enough. This should've been constructed in a different way, a way that did not destroy the very important avenue of trees that is part of St Kilda Road'. Derryn Hinch was there as well, so we actually had a federal MP attend to make some very clear points about his disgust and concern as he sees trees being torn down in a way that is not necessary.

When I addressed the group I made the point very clearly that in fact there were alternate locations and alternate ways of doing the construction. I am aware of at least two worked-up alternatives, including one which the previous government looked at, which was further to the west. A group of local and experienced engineers also put together a proposal which would have seen a different alignment and different approach to the loss of trees. This proposal was a very thoughtful one, but instead of independently assessing it I was concerned that Jacinta Allan immediately gave this proposal to the Metro Tunnel authority, effectively asking it to check its own homework.

It is hardly surprising that the authority said, 'Oh, no. We're doing it the right way'. Unfortunately the state government would not, in an independent way, consider alternative approaches that could have delivered less destruction, less loss of trees and a more mature approach to this sort of construction.

I was proud to join that group today. I pay tribute to all the activists who are determined to protect our important heritage along that corridor. St Kilda Road has recently, as we know, been permanently listed, along with the Domain and Government House — that whole precinct through there — on the National Heritage List. This is an important step that I congratulate Josh Frydenberg for taking.

But you have to ask real questions about what was going on with Heritage Victoria. On the Monday, when the national heritage listing was gazetted formally, it became clear that in fact late on the Friday night the head of Heritage Victoria, Steven Avery, who has popped up from somewhere — I do not quite know where he has come from, but he is a recent appointment to the position — made the decision, seemingly in the knowledge that on the Monday there would be a national heritage listing. He gave the go-ahead. He said, 'Start your engines. Start your chainsaws. Start your crushers. Away you go and you try and beat the national heritage listing'. What a shameful and disgraceful approach. Daniel Andrews is a bully. He is bullying communities, and he is leaving a legacy that is not what Victorians expect."

Postscript:
The loss of the trees in st. Kilda Road causes deep distress to many people. I spoke to one local resident who was suffering very visibly from dust irritation form the earthworks in progress. She also reported to me that since work has started and trees have been removed, mice have entered her house and the sound of distressed displaced birds was deafening.

St Kilda Road, Melbourne's Champs Elysees, is being vandalised for population growth that we don't need, but big business is imposing. Join a public protest Wednesday 21 Feb 2018, 1pm-1.30pm. The meeting is now in the reserve which is outside 1 Albert Road. It’s a triangle of land in the fork of Albert Road. Some more details and yellow arrow on map inside. 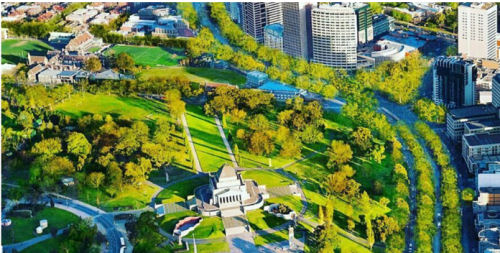 Come and see for yourself the disaster of our beautiful boulevard.

1 Albert Road, in front of ‘the Domain’ building
(in St Kilda Rd, opposite Melbourne Grammar, next to Albert Reserve.)

Tram: Get off at Domain Interchange. 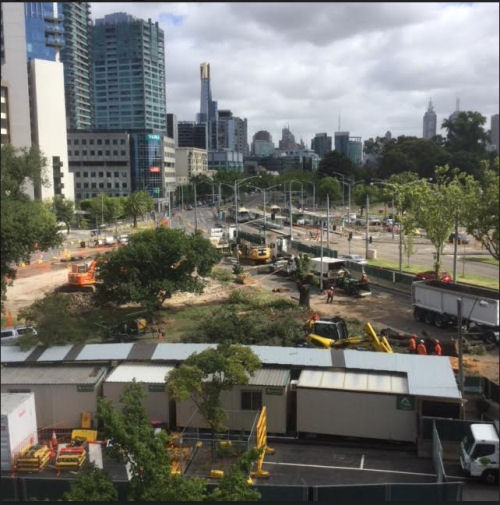 It is hard to believe our state government is allowing the world's most beautiful boulevard to be destroyed. (The Age 15/2). How dare it destroy St. Kilda Road in this shameful way? Why can't it learn from London, which is 'deep tunnelling' for 42 kilometres for the new line, Crossrail. This work is being done without damagin anything on top. In contrat, we vandals are bulding the relatively small Metro Tunnel and wrecking this wonderful area by cutting and filling (because it is cheaper than deep tunnelling) and bulldozing those beautiful trees. People will have to cope with years of a mess-up city. Vote out the government.
Mary Drost, letter published in The Age, Feb 16, 2018. 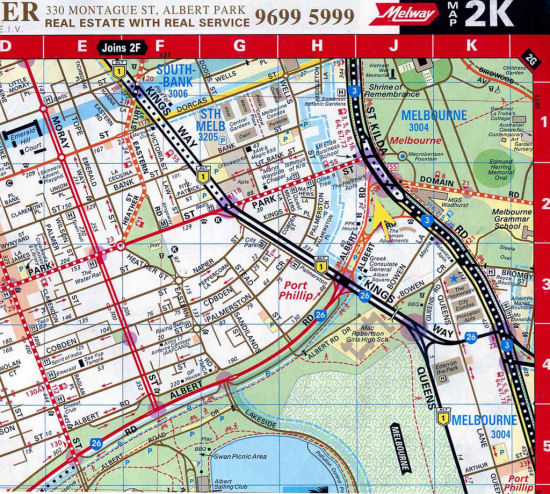