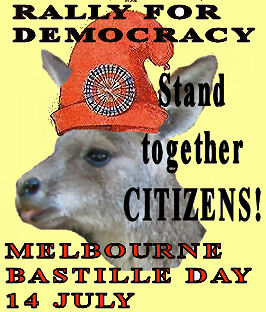 Here is the notice of a community rally protesting over the impact of the expansion of Melbourne's urban growth boundary, about to be pushed out by up to 46,000 hectares, for residential development and a freeway/ring road. The State Government is considering taking over planning powers of these new "growth areas".

The rally is being organised by Taxed Out Inc., Protectors of Public Lands Victoria Inc. and the Green Wedges Coalition. Community groups have been angered by the announcement that, as reported in the Age of 16 June 2009. Planning Minister Madden will host a luncheon on 14 July 2009 to "brief" developers and business "on the vision for our growth areas and the need to fast track infrastructure investment to create jobs" - and to raise funds for the ALP. It seems that a privileged section of the community can buy the Minister's ear at the expense of other citizens.

Where: Meet at the South-East Corner of Collins and William Streets, Melbourne.

The proposed expansion of Melbourne's Urban Growth Boundary will involve rezoning up to 46,000 hectares for residential development, new roads and a freeway. This policy could see unprecedented destruction of green wedges; environmental damage plus loss of western grasslands; destruction of wildlife including endangered species; increased greenhouse gas emissions; building of yet more freeways; loss of arable farm land; compulsory acquisition of land; increased tax burdens including the grossly unfair vendor tax a "Growth Areas Infrastructure Contribution - GAIC"; and comes as a result of the go-for-growth-at any-cost Government philosophy. Also the erosion of our democracy will be on the cards if the elected State Government bypasses Parliament and local councils over planning and environment issues.

Bring to Rally: Warm clothes, a cut lunch and something to sit on. Plus a placard. (Some will be provided.)

We would be very glad if you can send us a message on behalf of your organisation in support of the rally. This will help prove that your organisation is not city-centric or has "NIMBY" tendencies. Send to the above email address. I will read them out. Make sure to give the name of your group. (Messages of support have already been received from a few outer suburban and rural groups saying how much they appreciate city folks taking up these issues.) Plus we need people to attend even for a short time. Send to Julianne Bell on jbell5[AT]bigpond.com 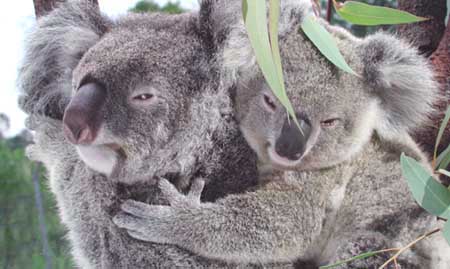 The Tweed Shire has abundant World Heritage areas and has the highest biodiversity of vertebrates in Australia - more than Kakadu National Park - due to abundant rainfall and rich volcanic soil from Mount Warning.

Kings Forest is a 2,000 + acres (880 hectares) parcel of land that contains critical habitat for the second largest colony of koalas on the Tweed Koala Coast (i.e. 145 to 175 koalas) out of a total of 300 koalas (see map). This is a very significant colony. There are a total of 22 endangered species of animals on this land and hundreds of endangered flora (scribbly gum and rare heathland).

There is currently a proposal by Mr Bob Ell, Executive Chairman, Leda Holdings, GPO Box 2522, SYDNEY NSW 200 before State government to develop the following on this land: 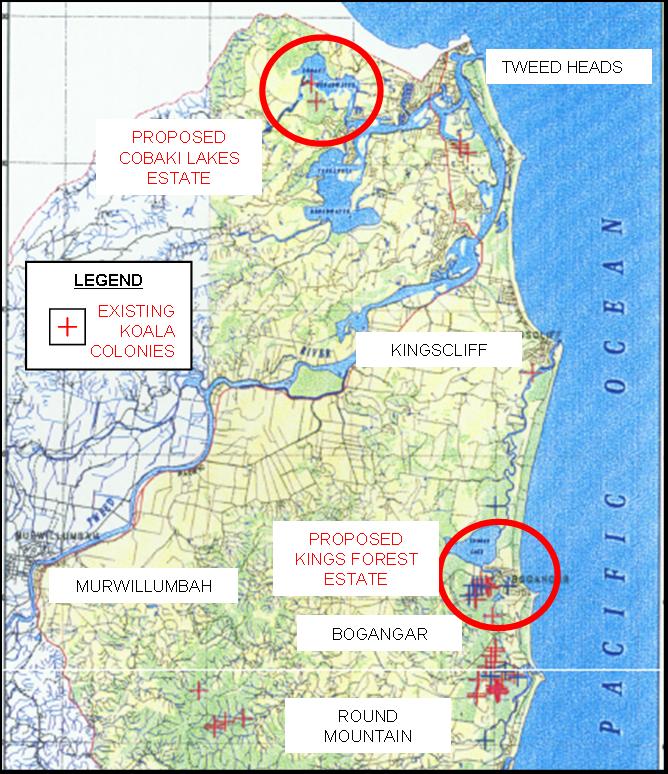 The biggest killers of koalas (in order of impact) are:

All three threats would be present on this development, in addition to others. Felled trees would not only cause loss of habitat for koalas but also loss of koalas' food source. Revegetation of these eucalypt species would take at least five to ten years.

Additionally, the plan includes a golf course, a four-lane road and bicycle paths to interface with the wildlife corridor for koalas who move on foot from tree to tree.

There are no koala-proof fences planned around the roads or overpasses/underpasses to prevent koalas from running onto the roads. This would be disastrous for the koalas and would lead to their local extinction.

Already the koala populations on the Tweed are highly fragmented due to lack of interconnecting wildlife corridors. Without a healthy gene pool their species will become weaker and sicker. This is may be the only healthy koala population in NSW. Other populations of koalas die from disease and weak immunity.

Golf courses spray pesticides, herbicides and fungicides that can be carcinogenic, neurotoxic, and mutagenic, affecting immunity and reproduction of koalas who could inhale and also tread in these toxins. Also fertilisers will kill native species of flora.

World koala experts say that when you reduce habitat and food sources to koalas, their numbers will reduce, so if this goes, all koalas go.

Since pockets of koala habitat occur throughout this area, removing pockets will have a major impact on the colony. Although 50% of the koala population are female, none of them have any sign of breeding due to the stress of logging in the area.

Due to the high fire-risk nature of the area with so many native trees, this development is very risky for human habitation. Every house would need trees cleared around it, trees that are habitat and a food source for the koalas thus significantly impacting endangered species. This would breach the Environmental Protection and Biodiversity Conservation Act of 1999 (EPBC Act). Furthermore, this is low-lying land prone to floods and close to the coast in the event of rising sea levels.

In summary, this proposal is an ecological disaster for the Tweed Shire.

There are estimated to be less than 100,000 koalas remaining in Australia, considerably less due to the recent disastrous Victorian bush fires and Queensland floods.

It is incumbent on us to protect those koalas and endangered species remaining not only for our growing tourism industry but for future generations. Currently, Koalas are predicted to become extinct in the wild by 2020.

Considering we are in the Sixth Mass Extinction of all species, it is imperative that we understand that human survival depends on biodiversity.