There is an urgent need to translate our environment back into its true value. In a decade the price tag given today will look like a joke and we will ask, ”How could we have relinquished that land, (that river, those wetlands) for such a small sum?” 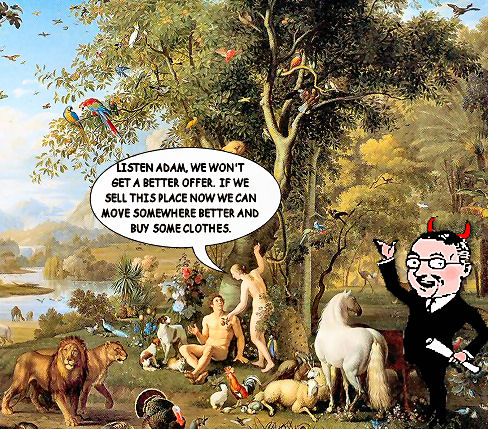 Over the last 40 years our environment has been increasingly spoken of in the public domain in terms of its monetary value. This was reinforced to me at a recent meeting where the speaker made it clear that tree and general nature conservation arguments must be expressed to the powers that be and associated bean counters in these terms. The attribution of a dollar value to something so complex and so vital to us as our natural environment is absurdly inadequate yet it has blinded and desensitised the minds of many to actual values. A translation back from the dollar is needed.

Once upon a time there was barter: transfer of goods between place of origin and place needed in exchange for what was considered of equal value. Then there was “currency” which acted as an intermediary for this exchange.

Currency was and still is used for its convenience, as it allows for a time lag in reciprocation and the ability to store credit. It serves a purpose.

Fast forward a few thousand years and find yourself in Australia. In the early 21st century. Not only goods are given a monetary value - let’s call it a $ value- but all that we see around us, all of nature, including natural processes that serve our needs and are vital to our survival are not real to those in power unless they are given a $ value. The $ (a human construct ) has become the end rather than the means. Trees that shade our local environments, keep us cool and are home to the birds whose song we enjoy may only be retained after their effects are translated into an ongoing $ value as in the savings on air conditioning and road re-surfacing. The $, whose buying- power is in fact fugitive and changeable, becomes the ultimate “measure” of the worth of things !

Bays and waterways, national parks and wild life, are considered by governments in respect to their tourist-pulling power rather than their intrinsic value as our enduring heritage and common wealth. The cart now goes before the horse, the tail wags the dog and the $ is now our tyrant . This despotism turns our attention from what we have to what we can aspire to, what can be acquired at the local mega store, to fulfill our material dreams. Or so we think.

When we are thus distracted from our surroundings , we can, in the blink of an eye, lose what we already have.

Translation of everything into the dollar ($ ), reduces beauty and benefits to numerals, and completely ignores subjectivity. So the joy of seeing something or being somewhere is not counted. This imperative to see everything in DOLLAR ($ ) terms means that our governments, our bureaucrats are dissuaded from using their mature judgement, abiding instead by the formula. Normal everyday people now even talk this way, in $ terms as though this is the real currency of our environment.

There is an urgent need to translate our environment back into its true value. In a decade the price tag given today will look like a joke and we will ask, ”How could we have relinquished that land, (that river, those wetlands) for such a small sum?”

We have been had. The value of an urban forest must be seen for itself as a cooling, calming, wildlife-accommodating irreplaceable oasis to be enjoyed, rather than a $2 million piece of potential housing real estate. $2 million will look totally ridiculous in a decade and the loss is permanent. It cannot be bought back once it has been put to another use. The $ value is ultimately meaningless.

We need to see things again for what they are, not through the $ medium. $s are handy for every day transactions but ridiculously inadequate and inappropriate for a unique geographical feature or area. Let’s ditch our $ glasses and really see our world, maybe for the first time in some people’s lives.

Let’s not lose our world in the useless one-way translation into the $ dollar. Earth is not a tradeable commodity.