The people of Western Sydney have been betrayed by the NSW Government after it was revealed (see bottom of page) they issued Lend Lease a licence that will allow the removal of all the Emus from the controversial former ADI Site. Despite years of protests by locals and their supporters further afield (see ADI site history on candobetter.net ), the 1535 hectare former Australian Defence Industries Site is now owned by Lend Lease which is developing 5400 houses. 900 hectares of the site, the future home of the Emus and Kangaroos, is meant to become a Regional Park. 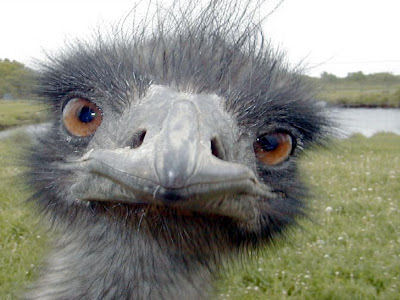 “For nearly a decade all levels of government, specifically the NSW Government, have stated that Emus and Kangaroos would be retained within the proposed Regional Park. So this is a major betrayal to the people of Western Sydney” said Geoff Brown President of the Western Sydney Conservation Alliance and who led the ADI Residents Action Groups fight to save the ADI Site.

“The NSW Government had previously said Emus and Kangaroos would remain within the proposed Wianamatta Regional Park. Their own Masterplan for the Wianamatta Regional Park states retaining a sustainable population of Kangaroos and Emus as a desired outcome. Lend Lease's own Macrofauna Management Plan (A plan they had to come up with due to conditions applied by the NSW Government) states: It is part of the vision for this plan that eastern grey kangaroos and emus will be present in the SMP in the long term. Penrith Council in its submissions on the future of Macrofauna within the Regional Park talked of the creation of viewing areas so that Emus and Kangaroos could be seen by the public visiting the Regional Park.”

“This is very sad news especially to those people whose homes backed onto the ADI Site are and were visited daily by the Emus that roamed the fence lines. To many they would have been like pets. I myself lived on this fence line for many years and have fond memories of Emu families visiting. I also filmed a father Emu leading about 8 tiny chicks as they wondered through the bushland.”

You can't trust a developer oriented State Government either

“Serious questions need to asked of Robyn Parker the NSW Environment Minister about this betrayal, the issuing of the licence and why 11 years after the St Marys Development Agreement was signed Lend Lease still owns about 835 hectares of the promised 900 hectare Regional Park.”

“The only reason these Emus are being evicted from their home of 50 years is because of Lend Leases mismanagement. One would assume that if the entire 900 hectare Regional Park was under the ownership and management of the NSW National Parks and Wildlife Service that 27 Emus would not be a problem to manage. There was never any major issues with Emus escaping until the ADI Site was sold to Lend Lease in the mid 2000's. Lend Leases primary focus has been on generating massive profits from their adjoining housing development than properly implementing their management plans for the sites animals and vegetation.”

“Lend Lease should tell us exactly where the Emus are to be sent so that any questions about their ongoing welfare can be properly addressed. What happens if there are young chicks at foot?”

§ The reason for the relocation of the emus is due to the increasing incidents of vandalism by the public to the boundary fence of the site.

§ Emus will be relocated 3-4 birds at a time to ensure their welfare and safety. They will be accompanied by a vet at all times.

§ The 2013 census indicates a total of 27 emus live on the St Marys Property.

§ Recipient sites have been selected in NSW that have native Australian bushland habitats and the necessary infrastructure in place to allow safe, careful and humane handling of emus.

“There has been a growing need to relocate the emus to a remote and safe location as a result of an increase in incidents of vandalism to the boundary fence. This vandalism has allowed emus to enter on to public roads where they are a hazard to both themselves and the public.”

“A fully accredited and experienced Vet will supervise all capture and transport and will ensure animal welfare is addressed and maintained throughout all aspects of the relocation process.”