Almaz-Antey, a Russian manufacturer of Buk missiles and Russia's main air-defense manufacturer has begun its own investigations into the MH17 affair, where a Malaysian air flight was downed over war-torn East Ukraine. Since this tragedy, NATO supporters have accused Russia of being the owner of a BUK missile which some believe may have been the thing that brought the Flight MH17 passenger aircraft down. Russians have responded by suggesting that if a missile was involved, it was probably a Ukrainian missile fired from East Ukraine when it was under Kiev military control. Although there are other theories, including one that another aircraft may have fired on MH17, the missile manufacturer itself is now trying to conduct its own investigation in order to have sanctions against it lifted. According to Almaz-Antey, missile manufacturers, the missile that likely struck the Boeing aircraft, 9M38-M1, was not produced in the Russian Federation since 1999, but they have evidence that the BUK-M1 air defense missile system and accompanying missiles were still deployed with the Ukrainian Armed Forces in 2005. According to their evidence, Ukraine had a total of 991 9M38M1 missiles at the time.

Article contains material republished from RT where originally published on June 02, 2015 at 9.46am. For live updates go to the original article. 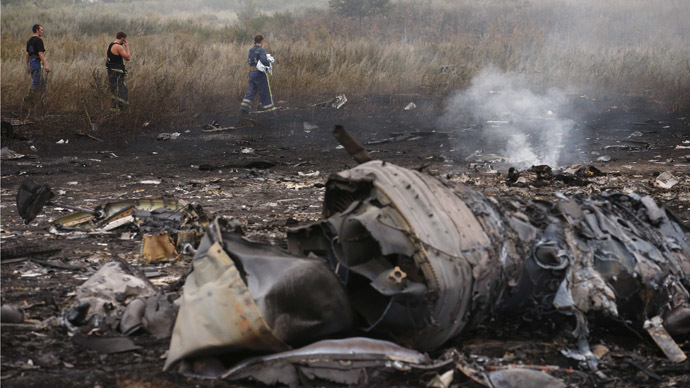 Emergencies Ministry members walk at the site of a Malaysia Airlines Boeing 777 plane crash, MH17, near the settlement of Grabovo in the Donetsk region, July 17, 2014. (Reuters/Maxim Zmeyev)

Russia’s air-defense systems manufacturer, Almaz-Antey, is holding a press conference on its appeal at the European Court of Justice against EU sanctions against it over the Boeing MH17 crash. The BUK missile manufacturer is to present its own findings.According to reporter, Daniel Bushell's tweets on this matter, Almaz-Antey, the missile manufacturer, have said that they cannot explain Ukraine air traffic control activity at time of crash, black box should reveal [this?].
Almaz-Antey have observed that there is a lot of absolutely contradictory information in Western media about circumstances of MH17 tragedy.

They say that they do not rule out other versions, but stand by their analysis that BUK M1 hit MH17.

The Ukrainian General Staff says that Ukraine possesses BUK M-1 missile systems, but that on the day of the MH17 crash Ukraine was not in control of the area where it is suspected the missile was fired.

Almaz-Antey say that they do technical analysis, but do not speculate on whether Kiev or self-defence side were to blame.
Almaz-Antey is still entertaining the possibility that another aircraft may have been involved in the downing of flight MH17 and state that the country that possessed the missile that hit flight MH17 remains unknown.

"If necessary, we can carry out a field test... with the participation of independent experts," Novikov says. "We are willing to carry out a demolition of a 9M38M1 missile at a specified angle and aimed at the same model of aircraft."

RT ask missile maker Almaz-Antey at media conference about location of MH17 shootdown and the missile makers responded that the angle of missile strike allows us to reveal MH17 was hit above the area of Zaroshchenske, not Snezhnoe as reported.

Almaz-Antey concluded their technical report and threw the session open to reporters. The question and answer session that followed elicited the following:

The missile that likely struck the Boeing aircraft, 9M38-M1, was not produced in the Russian Federation since 1999 - Almaz-Antey to reporters.

Almaz-Antey has evidence that the BUK-M1 air defense missile system and accompanying missiles have been still deployed with the Ukrainian Armed Forces in 2005. According to their evidence, they had a total of 991 9M38M1 missiles at the time, according to Head Engineer, Mikhail Malyshevsky.

“During the first stage of our investigation, the type of system was established. It was a Buk-M1 system [NATO reporting name SA-11], a 9?38-?1 rocket and a 9?314 warhead,” according to Malyshevsky.

He said the damage caused to the aircraft appears consistent with the 9M38-M1 missile, which has a specific "scalpel" trajectory, with 40 percent of shrapnel breaking apart in a perpendicular fashion to the initial trajectory of the missile.

The version of events that saw MH17 hit with a missile launched from the Snezhnoe area is full of inconsistencies. Further analysis proves that this was not the case, says Malyshevsky.

The character of the damage caused to the aircraft is consistent only with the BUK9M38 and BUK9M38-M1 missiles, if the BUK missiles are in question, according to.