Delivering Syria's speech, Speaker of the People's Assembly Mohammad Jihad al-Laham said history will not forgive those "who didn't learn the lessons of wars on other peoples." 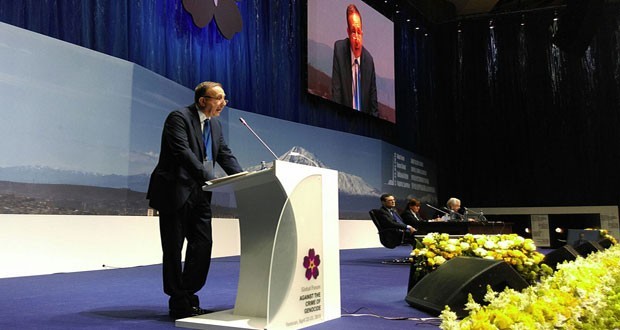 The current Turkish government, the successor of the Ottomans, has thrust itself so deeply in the current crisis in Syria, opening its land wide to terrorists coming from all corners of the world to cross border into Syria and commit horrible crimes against its people.

"Any crime against humans must be condemned and rejected whoever the perpetrator, and how if that crime was a genocide in which more than a million and a half of the brotherly Armenian people were killed," al-Laham told the forum.

"We in Syria have always felt the Armenians' sense of belonging is as much to Syria as it is to Armenian and vice versa," he said, affirming that the Armenians in Syria are an integral part of its people.

Al-Laham drew parallels between the Armenian Genocide and the mass crimes targeting the people in Syria and Iraq, saying the crimes systematically committed by the terrorists in both countries target all of the two peoples' components and are aimed at cleansing areas of their inhabitants.

These, and the deliberate damaging of the cultural heritage and the archeological and historical sites in Syria and Iraq, all constitute "a genocide against humanity" and crimes against the history and culture, he added.

While stressing that the history of appalling criminality is repeating itself now through the terrorists of today, al-Laham said this would not have happened was it not for those states and sides that are supplying the terrorists with whatever funds, arms, training and political and media cover they need to commit crimes.

Later, Armenian Prime Minister Hovik Abrahamyan said his country supports Syria in its fight against the terrorism exported to it from different countries.

During his meeting with Speaker al-Laham Abrahamyan stressed that the historical relations between Syria and Armenia are firmly established.

He saw that the Syrian participation in the forum, which marks the Centennial of the Armenian Genocide, committed by the Ottomans in 1915, reflects how much deep is the friendship relations binding the people of Syria and Armenia.

Out of Armenia's interest in further activating the parliamentary, political and economic relations with Syria, Abrahamyan used the opportunity of his meeting with al-Laham to extend an invitation to the Syrian Prime Minister to visit Armenia with a view of expanding the areas of economic cooperation between the two countries.

Al-Laham renewed Damascus's solidarity with Yerevan on the occasion, calling for joint work on the international level to prevent such crimes from being repeated through eliminating the terrorism ravaging Syria and Iraq.

#appendix" id="appendix">Appendix: Other articles about the Armenian Genocide