This article argues that you could probably get away with some nasty cartoons in a truly free press because such a press would freely report all sides to a dispute and not leave whole regions and classes of people with no expression in an international argument mediatized by the very same bunch of pillaging and plundering power elites, corporate and government, who profit from their silence. The article also wonders (but does not profess to know) whether the cold blooded assassinations at Charlie Hebdo were really an act of Islamic terrorism, or another false flag, on the principle of cui bono. 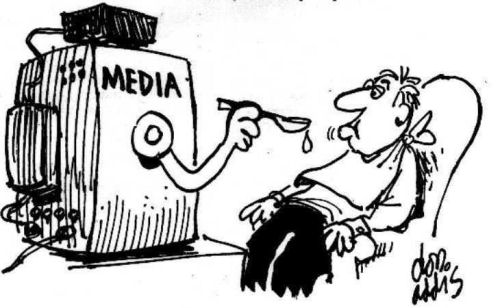 I remember thinking that Charlie Hebdo was overdoing rather unfunny cartoons to demonstrate defiance without seeming to give any thought to how wronged people in the Middle East have a right to feel, due to the effects of continuing colonialism – corporate and national – under the auspices of a US-led NATO. My observations in this 2012 article, “Anti-Islamic film - not so funny,” earned me capitalized insults as a leftist apologist for Islamic terrorism, anti-feminism and censorship. There was so much sound and fury in this correspondence that it left no room for any alternative explanation or dialogue. And that is the dynamic that false flags exploit.

Western treatment of Middle East and Media support for this

It’s all very well to celebrate a free press, but, since when is the Western mainstream newsmedia actually independent and free? Not only is it heavily biased in its reporting on the Middle East – when so much is at stake – but their barracking for the destruction of US/NATO targets seems actually to incite hatred and thereby encourage some people to join jihads. Let me put it this way, the mainstream newsmedia has a way of presenting the powers it wants to split and topple in the Middle East (and the East) as if they were all variations on Vlad the Impaler, imbuing its reports with quivering outrage and bathos, so that it must seem to many that the only honorable thing to do is to go and fight with the ‘rebels’ whom the press and NATO champion. Hence, it appears, the influx of foreign ‘rebel’ fighters from Australia, France, Britain and elsewhere and the widespread ignorance of the other side.

Charlie Hebdo might have a reputation for being outspoken, but to me it seemed to toe the US/NATO establishment line on illegal wars in the Middle East. For instance it didn’t question virtually baseless Western allegations that Bashar al-Assad is a ‘brutal dictator’, but casually exploited the propaganda in a cartoon showing the Syrian president standing triumphantly in front of a mountain of human bones like a hunter. If Charlie’s objective was largely to lampoon religion of all kinds, then there was another reason not to lampoon Bashar al-Assad, who presides over the last secular Arab state. [1] In other words, modern Charlie Hebdo was not politically subtle, critical, inquiring or a champion of Truth. Perhaps if it had been, it could have built bridges.

It seems to me that if the mainstream news and traditional alternative media really reported fairly, both, all sides of what is happening in the Middle East, then maybe people would not get so bothered about cartoons. Also maybe the cartoons would be a bit funnier and more informed. If the mainstream newsmedia did not constantly support and whitewash the Western military financial and industrial machine, this kind of violent response from the Middle East would have far less support. If the mainstream Western media interviewed, not just ‘rebels’ but government and a wide variety of citizens in Saudi Arabia or in Syria, for instance, those countries would have real voices and we would have ears to hear them. If it had done so in Iraq and Libya those countries might today be intact.

At candobetter.net we have often carried copies of letters to our media, especially SBS and ABC, the Australian state television channels, asking them to report more accurately on Middle Eastern and Eastern affairs because of the danger to peace that reporting propaganda carries. See http://candobetter.net/taxonomy/term/5364 Only on one occasion have we recorded a retraction. See ABC Australia apologises for bias against Russia in reporting MH17 crash. However this was a private apology, not a public statement on television.

I have so far written with the assumption that the Charlie Hebdo assassinations were not a false flag. Because false flags are the other side of the history of aggressive capitalist interference in the Middle East and other oil producing countries of the ‘undeveloped world’, and they are fundamental to the history of war. How else do you get peoples who hardly know each other to try to kill each other? You have to give them a reason that they believe is true.

A truly free Western newsmedia would make false flags a lot harder to fly, but today’s newsmedia actively conveys state propaganda designed to terrify the public into supporting wars and bad laws, whilst presenting it as news and entertainment.

False flags have also been used by the US as methods to goad other countries into supporting it. Europe is too close to comfort to the Middle East to be gung ho about starting wars there. Its support for the US in NATO recently has been bizarre. On one interpretation [3], it could be that, like Russia, it chooses to appease the United States, in the hope of preventing all-out war. The terrorist attacks could have been a warning to Hollande not to take an independent stand vis a vis Russia. Just five days ago he was upbeat about the sanctions being lifted if talks went well. How long is that going to last after this series of terrorist attacks?

One cannot help but ask, if this horrible Charlie Hebdo massacre was really an act of terrorism by Muslims, why would they attack cartoonists and lone journalists, instead of the big media owners and NATO policy-supporting politicians? After all, the US has had no qualms in planning and carrying out or supporting assassinations of leaders, such as of Fidel Castro, Sadadm Husein, Muammar Gaddaffi, and, still in the firing line: Bashar al-Assad. One might say it could be too hard for a bunch of poor Muslims to get to anyone rich and powerful, but poor Muslims are supposed to have flown planes into the World Trade Center and to have carried out numerous other sophisticated acts of terror. In the case of false flags though, the power elite is not going to target its own. That would better explain to me the targeting of politically lesser citizens.

I won’t go into the nuts and bolts of the reporting of the Charlie Hebdo massacre and its sequel, but some aspects immediately seem odd. One is the shooting of a policeman in the head without blood appearing, censored by France2 News because of its graphic nature – except that the real footage, whilst tragic, was strangely ungraphic. See http://www.conspiracyclub.co/2015/01/07/paris-fake-terrorism/. Then there was the identity card left in a vehicle by one of the terrorists, reminiscent of the passport found in the wreckage of the 9-11 towers. After that there was the police chase of two suspected terrorists which culminated in a shoot-out where the terrorists lost their lives, leaving no-one to tell their story. And then there was the second in command detective who shot himself at Lieges, the night of the Charlie Hebdo assassinations. http://www.lepopulaire.fr/limousin/actualite/2015/01/08/un-commissaire-de-police-de-limoges-se-suicide-dans-son-bureau_11283307.htmlHe was deeply involved in the investigation of the Charlie Hebdo cases of Muslim protest, which had been ongoing for years and was the second detective to apparently suicide in the same team in slightly over one year.

The mainstream Western press has a tendency to report the US-NATO view and which ever so-called revolutionary group they support. It does not canvas the opinions of people who do not identify with Western supported revolutionaries; it does not ask government opinion. If the press reporting on the Middle East, notably on Syria, Iran, Iraq and Libya (as well as Russia and Ukraine in Eastern Europe) actually got reports from many sides, then the people in those countries and those who identify with them would be less likely to see the Western Press as an enemy.

The West has been instrumental in bringing down leaders and governments and sowing chaos to an extent in the Middle East that most Western citizens have no inkling of because this chaotic war and looting machine called ‘capitalism and democracy’ is marketed by the Western Press as a positive force, whilst the people it is trampling are portrayed as irrational, bloodthirsty religious maniacs and international terrorists. The mainstream press generally does not make overt fun of Islam and Mohammed, but a wing of the press that identifies itself as revolutionary free press and critical of the status quo, does, purportedly to dramatise and ridicule Islam’s apparent contempt for free speech.

Charlie Hebdooriginally became a fatwa target in 2 November 2011when it published an edition on Islam, with a cover of a a cartoon Muslim saying, “100 lashes if you don’t die laughing!”. In 2012 it followed with a large number of insulting cartoons about Mohammed as a gesture of indignation against moves to censor media critical of Islam.

The context was a film called Innocence of Muslims which parts of which available on you-tube portrayed the founder of Islam in a very bad personal and political light and Muslims as aggressively anti-Christian. Publicity about this film was accompanied by widespread riots by Muslims against foreign embassies, particularly US embassies, including riots in Sydney on 15 September 2012, with police injured. At the same time warships from more than 25 countries, including the United States, Britain, France, Saudi Arabia and the UAE, were together launching a military exercise in the Straits of Hormuz, in response to threats to close it off. There was plenty of reason for Muslims to be angry with and frightened by the West apart from that film. Today the stakes are even higher and the misery of war-torn and subdivided Middle East is even greater than it was.

Maybe therefore Westerners should hold their own governments and media proprietors to greater account if we are to avoid World War Three.

Yes, we do need a really free press in the West. That is worth fighting for. Then maybe we can have cartoons and the truth in all its aspects, with a voice for everyone.

[1]President Bashar al-Assad, although the butt of so much mediatized professionally politicized opprobrium, totally fails to bluster and threaten, but continues doggedly to present Syria’s case.

[2] International and human rights professor of law, Francis Boyle’s Destroying Libya and World Order: The Three-Decade US Campaign to Terminate the Qaddafi Revolution , (Kindle Locations 1787-1841), have suggested this view to me.