The following article publishes an email sent by Tony Recsei, President of Save our Suburbs NSW, to SOS members and friends. Dated Thursday, 26 May 2016, it is a report on his attendance at a luncheon organised by the Greater Sydney Commission (GSC) in Paramatta. The GSC is a growth lobby tool. Here Recsei points out that the 30 minute city does not exist as planners describe it and suggests that the Commission should investigate low density cities where the cost of housing is also low and find out what they are doing right, instead of continuing to visit high density cities. See the SOS NSW blogspot here.

Yesterday I attended a luncheon organized by the Greater Sydney Commission (GSC) at their offices in Parramatta. The GSC was formed to lead metropolitan planning for the Greater Sydney Region. Twelve people attended the luncheon, half of them being members of the GSC including chairperson Lucy Turnbull and chief executive officer Sarah Hill. The rest were from various government and non-government organisations.

A pleasant atmosphere prevailed and people talked freely. GSC Social Commissioner Heather Nesbitt introduced the discussion, emphasizing the need for livability and collaboration and trust. Sarah Hill said priorities include preparing district plans, getting out of the office and talking to people. There needs to be plans for a greater Parramatta, the Western Sydney Airport, linking infrastructure with planning, providing advice to the Minister and making awards and grants. Lucy Turnbull said they will try to get a whole of government approach.

In turn we were each invited to say what we felt.

· Save Our Suburbs focusses on the underlying rationale behind planning in the state. That rationale relates to increasing density. A fundamental tension results as the community does not want increased density. This dichotomy bedevils all attempts at consultation.

· Neither high-profile high-density advocate Professor Peter Newman nor anyone else can give me an example of a high-density city that does not suffer from the ills they claim high-density will alleviate.

· A previous planning minister, Brad Hazard had led a delegation to investigate planning in North America but only visited jurisdictions with high-density policies. They did not visit the more successful cities which happen to have low density policies.

· No advantages claimed for high-density policies stand up to any scrutiny. These policies cause increased congestion, unaffordable housing and adverse health impacts (such as a 70% increase in psychosis). Forcing in high-density when most people want single-residential reduces housing choice. High-density results in excessive greenhouse gas emissions. In high-rise per person energy consumption and embodied energy is double that of single-residential. Such emissions represent 30% of people’s annual emissions while transport represents only 10%.

Lucy Turnbull referred to the “30 minute city” - that is a city divided into sections where people in 30 minutes or less can easily get to work, shops, schools etc. and walk to many destinations. I asked where is such a place. People might initially find a dwelling near their place of work but subsequently change their job without moving house; other members of the household may work or study somewhere else. I pointed such reduction in travel times does not happen in high-density cities. For example Hong Kong has average travel times to work of 47 minutes compared to 35 minutes in Sydney. Also, in Hong Kong only about 20% of people work in the area where they live. This proportion is about the same as in low density Los Angeles. A city with “30 minute” sections is a figment of the imagination.

They asked what North American cities should Brad Hazard have visited. I suggested Houston as an example where houses cost about ¼ of their equivalents in Sydney and suggested the GSC should send a delegation there to see what Houston does right and what it does wrong.

My discussion took about 30 minutes of the 2 hour luncheon time.

As we left one of the GSC members said to me “Keep on keeping us honest”!

“Every week, groups like ours receive calls from distressed residents, appalled at the conduct of planning in Victoria. People expect clear planning rules, integrity in governance and decisions in the long term public interest. Instead we have a rampant culture of secrecy and non disclosure, conflicts of interest, a perception of favoured access and undue influence, and a risk and perception of corruption.” - Ann Birrell, Vice President of Save Our Suburbs. SOS conducted a survey of Victoria's election candidates on associated matters and found 90 per cent and more support for planning reform. Candobetter.net's editors note that 54% supported wider population debate for a stable population on ecological grounds. The full questionnaire is to be found at https://www.surveymonkey.net/results/SM-9PF3VJPL/ Over 80% of respondents admitted to thinking that Victorians are unhappy about the way Melbourne is developing. Latest update on individual candidate responses can be found on a spreadsheet here: http://sos.asn.au/vic/wp-content/uploads/2014/11/141117-Planning-Survey-of-Candidates-RO.xlsx

A survey of Victoria’s election candidates has found overwhelming support for planning reform across the state and across the political spectrum:

- Over 90% support political donations reform
- Over 90% think that the Planning Minister should publish advice relied on and reasons for decisions
- Over 95% say we need to improve transparency, accountability and integrity 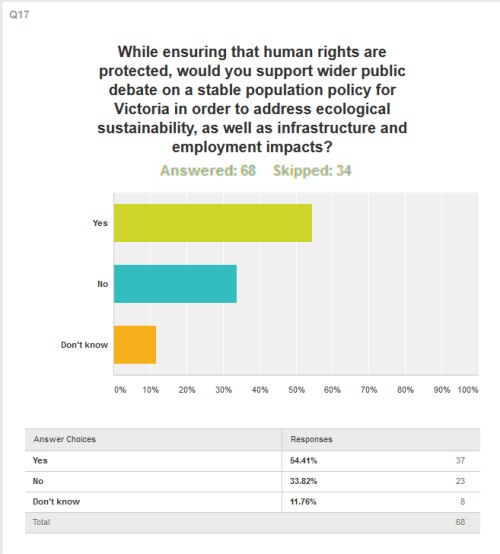 The survey was conducted by Save Our Suburbs and supported by 18 other community groups, representing thousands of concerned Victorians. The results were released on the SOS website today.

"The purpose of the survey is to draw candidates' attention to key planning issues and to provide information for voters.” said Ann Birrell, Vice President of Save Our Suburbs.

“Every week, groups like ours receive calls from distressed residents, appalled at the conduct of planning in Victoria. People expect clear planning rules, integrity in governance and decisions in the long term public interest.

“Instead we have a rampant culture of secrecy and non disclosure, conflicts of interest, a perception of favoured access and undue influence, and a risk and perception of corruption.”

“Candidates from all backgrounds share our concern that planning is out of control in Victoria, from urban to rural electorates and from the far left to the far right of politics.“

“Once in Government both the Liberals and the ALP have a track record of continuing to deregulate our planning and governance system, in complete disregard for the long term public interest of Victorians.

"As a result, we are about to see a fourth Victorian Government lose office.” concluded Ann Birrell. 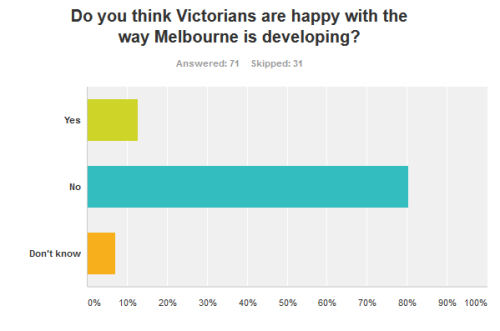 Groups supporting the Survey include:

Come along and ask your own questions. 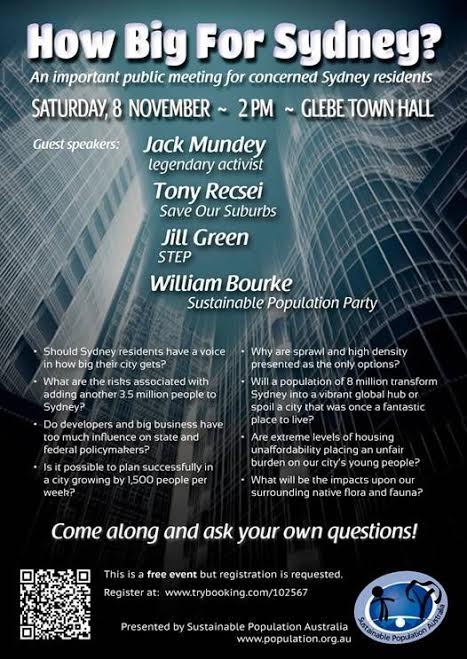 Save our Suburbs (S.O.S.) have developed the attached survey on planning issues for candidates at the coming State Election. They are writing to ask planning groups to sign on to the survey. They will be listing all groups supporting the survey. The more groups that are signatories, the more influence the Survey will have, both on candidates and political parties, and also in the media. 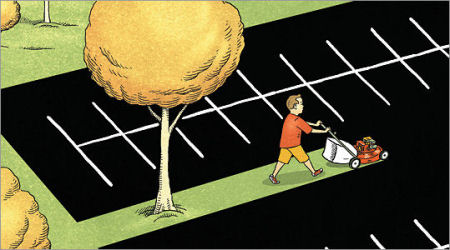 [Click here for the survey in pdf or scroll down to find rough text version.]

S.O.S. proposes sending the survey to candidates on October 1, and to formally conclude the survey on October 31. Late responses will be included in publicity where possible. S.O.S. will publish the results on their website and also send the results to other groups. It is hoped that the results can be used by local and state groups to highlight planning issues with candidates and as content for media releases. You can find out more or contact Save Our Suburbs via www.sos.asn.au.

[Editor: The following content was teased out of the linked to pdf file and there may be some inaccuracies due to the difficulty of this process. For the real questionnaire you still need to go to this link and look at the .pdf file.

Question 2: Local policy and amenity
Do you think the Environment and Planning Act should be amended to give local policy and local amenity greater weight?
Further comment?
Question 3: Community consultation on planning
Do you believe residents have been adequately consulted on major planning issues like the creation of Melbourne 2030 over a decade ago and the formulation of the current Plan Melbourne strategy?
If not, what sort of community consultation do you think should be adopted by the State Government and Local Councils?
Assuming that Melbourne continues to grow, would you rather see Melbourne develop like:

Question 5: Governance
Currently, the Minister is able to 'call­in' planning matters, that is, to intervene and remove planning applications and appeal hearings from Council and the Courts.
Would you support mandatory criteria to define the scope of ministerial call­in powers?
Do you think the Minister should be required to publish advice relied on and reasons for decisions on projects that are called in?
Do you have any further comments about this?

Question 6: Ministerial powers
Is there too much discretionary decision making in our current planning system?
Do you support minimum mandatory provisions for VCAT and Local Councils?
Do you have any further comments about this?

Question 7: Mandatory and discretionary requirements
Would you vote to amend the Planning and Environment Act to give greater precedence to environmentally sustainable development?
Recognising the need to address sustainability, human rights, and social equity, would you support wider public debate on a stable population policy for Victoria?
Do you have any further comment about this?
Question 8: Sustainability

The major political parties have withdrawn from the historic central planning role of Government. In Government, they want to 'reduce red tape', to 'get out of the way of business' and as Plan Melbourne states, to facilitate development, not regulate it
Do you think the deregulation of planning as represented by Plan Melbourne is in the public interest?
Do you think Victorians support the current policies of deregulation of planning?
Do you think the marketplace alone can address planning issues that involve long-term social, environmental and economic factors?
Do you have any further comment about this?

Question 9: Deregulation of planning
How important are the following areas of reform?
Do you have any further comments about how to achieve better planning for Victoria?