The heat and severity of Kinglake and Marysville fires that killed 159 people on Black Saturday was significantly increased by clear-fell logging of forests, scientists believe. 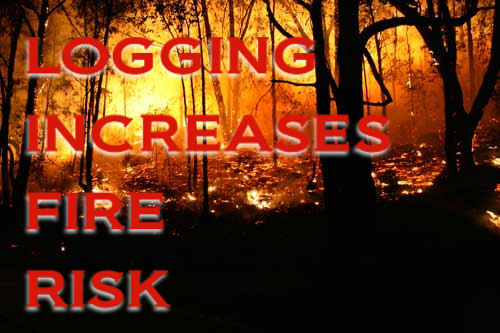 In a landmark two-year study of Victorian fires, scientists from Melbourne University and the ANU examined satellite images of hundreds of thousands of trees burnt on Black Saturday.

Abstract of Chris Taylor, Michael A. McCarthy and David B. Lindenmayer, "Non-linear effects of stand age on fire severity":

Rather than limit logging, the Victorian government intends to fight the fires through more fires, contrary to logic and good stewardship of our environment. Following the disastrous Black Saturday wildfires, the Victorian Government established a policy to burn 5% of all public land each year despite any fires naturally caused by lightning or other means. Sadly, most of the burning occurs in national parks and wilderness areas (where no one lives), simply to reach their ‘target’ of burning nearly 400,000 hectares annually.

Please sign the petition:
End deadly prescribed burns in Victoria and the carnage to native animals.